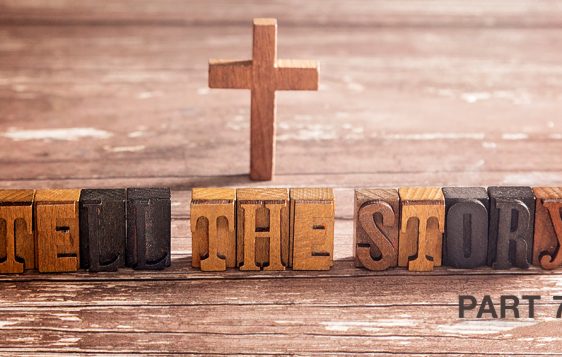 Time is a precious commodity that encompasses many aspects of our lives. Have you ever thought about that? A.W. Tozer said it like this: “Time is a resource that is non-renewable and non-transferable. You cannot store it, slow it up, hold it up, divide it up or give it up. You cannot hoard it up or save it up for a rainy day-when it’s lost it is unrecoverable. When it’s lost, it’s unrecoverable. When you kill time, there is no resurrection.”

All of those aspects of time, all those things we’d like to do with it but we don’t . . . In the Bible time is a subject that the Lord mentions often.

(The Lord knew that we were going to have Covid-19, and we were not going to be able to hug people for a while. And there it is in Scripture!)

There is a time for everything, and in Psalm 90:12 the psalmist says, “Teach us to number our days that we may apply our hearts unto wisdom.” He says we should understand the time that’s on our hands and to number our days so we can be wise with the time we have.

In the New Testament, James 4:13-14 encourages us to consider our time here on earth: “Woe to ye that say today or tomorrow we will go into such a city and continue there a year and buy and sell and get gain. Whereas ye know not what shall be on the morrow, for what is your life. It is even a vapor that appears for a little time and then vanisheth away.”

James tells us to consider what our life really means. We think about all the things we assume we’ll be doing in the future but don’t even realize how short this life is. It’s like a vapor and it’s gone, a tiny speck on the timeline of eternity.

So what are we doing with what little time we have? Every year I have these big plans at Christmas time. During Christmas break, there’s so many things I’m going to accomplish. I’m going to get this done and that done.

And then, of course, I go on Pinterest and I save all these projects because this Christmas I’m going to make all my gifts and save money. I’m going to make little bags with pieces of fruit in them and I’ll give them to people and they can boil it on their stove so their houses will smell good.

Where does the time go when I’m off work? What am I doing with that time? Am I my wasting it? Am I on my phone  making way too many plans and I never actually do anything? Is anybody else guilty of that?

When it’s all said and done, and you look back and think, “Where did the time go?” what should we be using our time for? Paul encouraged believers to be sanctified to the Lord and to be Christ-like. That’s what we’re to be doing with our time.

Ephesians 5:15 says, “See then that ye walk circumspectly (carefully), not as fools but as wise, redeeming the time because the days are evil.” Paul is not saying that all of our days are evil and there’s no purpose for us; he meant that when we look like the secular world we may be participating in sinful activities that can take us from the Lord. Instead we’re to be careful with how we use our time. We’re to be wise, redeeming the time.

Throughout this study, we’ve learned how to better serve the Lord with our words, our actions, our thoughts and now our time. Our time should be used to tell the story of Jesus. That’s the whole theme of this study, the hymn “I Love to Tell the Story.” Even the way we spend our time should be telling the story.

I’m going to step on toes when I say this (mine are probably going to be hurting as well), but if we looked at our daily schedules, how much of our day was actually spent in showing/telling the story of Jesus? The places you’ve gone, the things you’ve done . . . were they glorifying to the Lord or satisfying to yourself?

Some things we spend our time on are good things. And the Lord says that we’re to work hard and to do all things for his glory. But this morning I got up, had my coffee and my quiet time, and probably spent about an hour with the Lord. But that’s been about it.

Then I began to think that there are a lot more hours in the day that I could be using some of that time to glorify the Lord. Was there a time when I told someone I would pray for them but didn’t actually do it? Anybody else guilty of saying, “Oh, I’ll pray for you” but then you might not ever actually get to it.

That’s one thing I’ve really been trying to work on. If I tell someone I will pray for them, I want to stop what I’m doing and, if possible, to pray right then. Otherwise, I’m going to forget. So are we using our day to glorify the Lord? Or are we using it to glorify ourselves?

I have friends who are not believers and they celebrate Christmas, and I’m like, “You’re having a birthday party for someone you don’t even know!” Their focus is not Jesus, and they may not know who he really is.  Are they focused on Santa and the gifts that he brings or on the Savior, who is the gift of peace and salvation? Do our holiday traditions revolve around us or the Lord?

The answers can be convicting because we’re having so much fun, but is it that fun really glorifying to God? We have to reevaluate those activities.

When children look at the lights on the tree do you point them to the true light of the world?

When Christmas gifts are opened, do you share with those you love that the best gift is Jesus Christ, the Son of God, and that he offers the greatest gift of all, salvation?

It’s time to tell the story of Jesus, the right story, and use our words, our actions, our thoughts, and our time for the Lord.

That’s what I want to do this year. Let’s use the time that the Lord has given us to share his name across the globe with all those that we come in contact with. Use your voice, wherever you are, whether it’s in school, at work, at the post office, at the store, at the hair salon, at the daycare, on Facebook, on Instagram, with your family, with your friends, your doctor, your nurses, wherever you are. You are right where God wants you to be in that very moment

God will use those encounters for his glory. That’s what Romans 8:28 tells us: If you’re sick and in the hospital, the Lord knows you’re there, so use that for his glory.

If the plans change and things get mixed up, and you’re somewhere that you didn’t think you were going to be in that moment God knew you’re going to be there. So use that moment for his glory, just like he did with Esther . . .

The Jews had been taken captive by King Nebuchadnezzar and moved to Babylon 100 years before her story began. At that point, the Jews were scattered around and in Esther chapter four the King of Persia brought her and other beautiful young girls to the palace to possibly become one of his queens.

After Esther is brought before the king and chosen by him instead of dismissed, Haman, an advisor to the king, began making trouble for the Jewish people. He tricked the king into signing a decree to kill all of them. Esther’s Uncle Mordecai, a palace scribe, discovers the plot then tells Esther she must go before the king to prevent this genocide.

But if a woman, even the Queen, attempted to go before the king without being summoned, she risked being been killed.  Mordecai encouraged a terrified Esther to have courage in Esther 4:14: ” . . .  who knows whether thou art come to the kingdom for such a time as this.”

Mordecai suggests the possibility that Esther’s presence inside the palace was no accident. Mordecai is saying, “How do you know that this is not the reason why you became the queen, to save your people, not just yourself but to save your people.” She had to count the cost if she was going to make that stand before the king, and that’s something we have to think about too.

What is the cost of sharing the gospel with people? We have all kinds of excuses for not using our time that way:

People will look at me weird.

No one will want to talk to me anymore.

I won’t know all the words to say and I’ll mess up.

Basically, we’re afraid, but the Holy Spirit leads people’s hearts, so it’s OK if we mess up. The Lord says that his Word does not go out void, so whatever the Lord leads us to say he’s going to use. The Holy Spirit works on the person you’ve shared with, so you don’t have to carry that burden.

Esther had to count the cost, and she decided to help save an entire nation of people, even though her life was at risk. And that was God’s plan “for such a time as this.”

Just like Mordecai asked Esther, “How do you know that the reason you crossed paths with someone is not so you can share the gospel then let the Holy Spirit work?” What’s more important? What are we going to be using our time for?

Our world is at one of its lowest points that I’ve ever seen in my lifetime. People are searching for hope right now and you have the hope that they’re searching for. There is no greater time to share the story of Jesus and glorify God than right now.

We have that opportunity to those we know well and those we have just met. Instead of being fearful to share about Jesus, let’s put the focus on him.  If all Christians would do that, Jesus’ name would be famous . . . and in a good way!

If we lived our lives using our time, our words, our actions and our thoughts to glorify Jesus, so many people’s lives could be changed. Let’s focus on that this year.