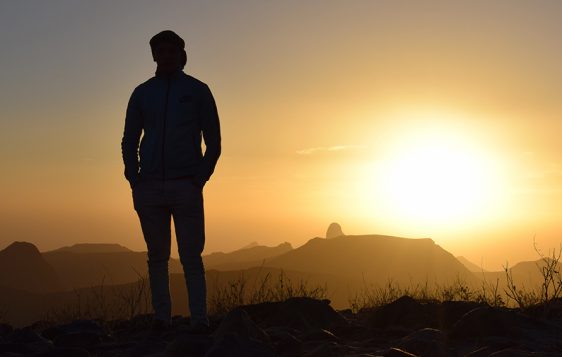 A quiet roar
A steady stream
A childhood memory
A goodbye

A pitter-patter
A puddle
A pair of boots

A last kiss
A cold embrace

There is a day that is vividly etched inside my memory.

It was raining, and it was the day we buried a marine. A marine who was my uncle, and who had taken his own life.

He hadn’t reached the age of 30 and was married with three beautiful daughters and a relationship with the Lord.

But it wasn’t enough to keep the gun he cocked and pulled away from his head in their basement with his family just upstairs.

My uncle had some emotional issues and was on medication for bipolar personality disorder. He was also about to be deployed to the Middle East – and it was just too much for him.

I barely knew him; I was only seven years old when he committed suicide. I don’t even remember talking to him or really having a relationship with him as they lived in a different state.

But I remember his funeral.

And I lived through and saw the aftermath of his death.

I remember my Mimi sobbing for her son.

I remember the heavy emotions swirling around the church and the graveyard – the painful weight of loss.

I remember the bugle playing taps and the folding of the flag ceremony as he was given a full military funeral.

Why am I telling you this? Because this event forever changed my life and severely impacted my family.

I think, in some families, a death may bring the members closer together.

In my family, it drove a wedge between sisters, separated a grandmother from her granddaughters who grew up without a father – the youngest being only four at the time.

Because of this tragedy, and the aftermath I saw come from it, I told myself I would never commit suicide.

I would never kill myself.

Not because of anything the Bible says on it or society’s standards, but because I saw the repercussions of it first hand as a girl, a teenager and now an adult.

Suicide is a difficult topic to discuss as we come face-to-face with an ugly truth… someone would rather die than live.

In the book Death of a Salesman a man tragically chooses to kill himself as he believes he is worth more to his family dead than alive.

He had committed an affair. His relationship with his sons was rocky, and in the end, he lost sight of his own self-worth.

Friends, let me tell you right now – you are not alone.

Even if everything feels dark and it seems like nothing is getting better and you feel powerless to stop whatever it is that is causing you pain or heartache – there is light.

The deadliest combination that leads to suicide is when we feel hopeless and helpless.

But there is hope and help out there – don’t believe the devil’s lies.

I personally struggle with both anxiety and depression.

Sometimes, it’s hard for me to find a reason to get out of bed in the morning.

Sometimes, it’s hard for me to do any activities I should enjoy.

Sometimes, it’s easy to believe I have no purpose or meaning in life and I am a failure.

But that’s exactly what Satan wants me to think so I don’t get up and live my life for an ultimate purpose – God’s glory and kingdom.

Remember, we do not fight in this world against flesh and blood, but against the cosmic powers who rule over this present darkness and the spiritual forces of evil (Ephesians 6:12).

Satan would love nothing more than to take Christians out of the fight before their battles are won.

Satan would love nothing more than to take those who do not believe in Jesus from the living so they would be trapped with him in hell – forever.

Let me be brutally honest with you: There is no winning in suicide – only tragedy and despair which I have seen firsthand.

For those of you who have lost loved ones to suicide, take heart that if they were believers that life nor death, angels nor demons, nor even the powers of hell could separate them from God’s love (Romans 8:38).

Suicide is not the “unforgiveable sin”.

For those of you who struggle with suicidal thoughts, loneliness, depression or despair, please, there is no shame in that.

But I beg of you to seek out help.

I also ask that you listen to me as I say this – you are never, ever, alone.

God is always there for you.

Find life, hope and purpose in him today.

Copyright © 2020 by Melody Turner @ https://mxtv.org/the-aftermath-of-suicide/. Used with permission. No part of this article may be reproduced or reprinted without permission in writing from Lifeword.org.