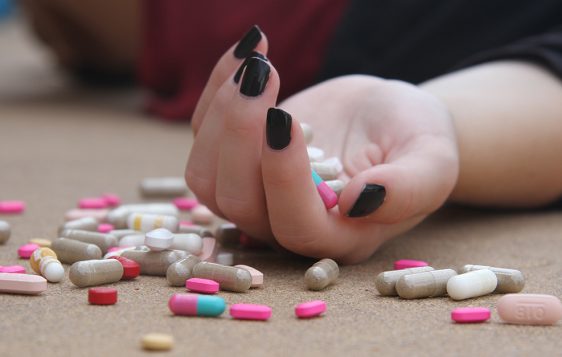 Suicide is not a new story, and for students like freshman Whitney Barnum and senior Timothy Black, who both attend a private Christian college, it is a scary reality.

Aaron New, head of the behavioral sciences department of the college they attend, says suicide awareness is literally a matter of life or death.

“To not address it, to not talk about it, to not get better at support and intervention is to cross our fingers and hope it takes care of itself on its own,” says New. “We can’t do that with people’s lives at stake.”

New goes on to explain that there are two different ways to think of the term “suicidal.”

“In the crisis situation where someone is suicidal right now the first point is to do something to keep them safe,” says New. “Then there is the counseling and long-term care and support for the weeks and months after the crisis is over.”

He says there is one thing that everyone can do to help increase suicidal awareness: Don’t be afraid to ask a person if you think he or she is suicidal.

“There is a myth that goes like this: If a person is in a bad place and I ask them about suicide I put them at risk for suicide, but that’s not right. Help is necessary, and people should try to help others who are suffering. Be the help rather than just saying there is help. When someone is really suicidal, they need something more tangible. We have to be the help.

“We should never be afraid that by asking we are going to cause them to commit suicide. The path that leads to suicide is usually a lethal combination of two things: helplessness and hopelessness.

Black started using weed, tried cocaine but didn’t like it, and then became addicted to meth for five years. The drugs influenced him to become depressed to the point of becoming suicidal.

“When you are doing the drugs and stuff, you aren’t thinking about God. It felt like it would be easier to get it all over with instead of [living],” says Black. “My friends kept me on a watch for two weeks and [during that time] I tried to kill myself eight times. If it weren’t for them I wouldn’t be here.”

Black says he and his friends stopped doing drugs, and he went back to church and never thought about it again. Barnum says she surrendered her life to Christ and her suicidal thoughts began to lessen because she says she knew that they were not right for the path of her life.

Barnum lost her niece in a car accident and says she was overcome with depression and anxiety that led her to thoughts of taking her own life.

“I lost my mind,” says Barnum. “I was admitted into a hospital in February of the following year and almost attempted [suicide]. There are still times that it bothers me. You never don’t have [thoughts of suicide] after that.

“The week I was in the hospital, I had my Bible with me and I always had it open and one of my friends got me a devotional and I had that open as well,” says Barnum. “I got a lot of therapy and I happened to get a counselor who was religious and she actually used to work at a private Christian college. It’s OK to have those feelings but not OK to act on them. It’s not bad to ask for help – you are not weak because you are asking for help.”

The fact that they reached out for help is the common denominator in both stories. Joel Slayton, chair of the Bible department, says that students need to realize there are people who can help and guide them through dark places in life, but they need to reach out.

“You can’t hide it; you’ve got to make it known,” says Slayton.  “One of the worst things a person can do is to stay there alone. There are people who care about you and they will help you through it.”

Anyone considering suicide needs to talk to someone who can pray for them and let them know that they are not alone. Beyond help, there is also hope, according to Slayton.

“As a kid I grew up thinking that the last thing a person did determined their destiny, but that’s not right or biblical; it’s what they do with Jesus,” says Slayton. “Even Christians go through times of depression where they lose hope, but our hope is in the Lord, not just for the future, but for today.”

Bible instructor Tim Brewer agrees with Slayton: People who are considering or have considered suicide are not alone.

“There is no temptation or trial that’s not common to man, but God is faithful and will provide a way out,” says Brewer. “There is hope even though the culture you are living in is conducive to hopelessness . . . but the gospel prevails.”

Dr. New says, “When talking with someone who is suicidal, we must have empathy. We are never going to scold or lecture someone out of suicidal thoughts,” says New. “We need empathy. We need compassion and patience. In crisis we need people who are available to offer encouragement, accountability and a safe place.”