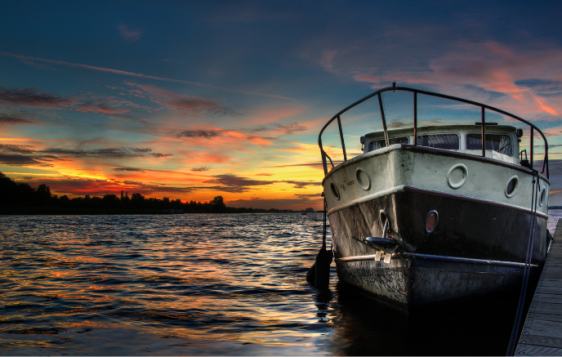 Get out of that boat! It’s the universal Christian code for taking a step of faith.

Peter’s step out of a boat onto rough waters sparks a flame in modern-day hearts to risk it (Matthew 14:22-33) . . . to trust Jesus enough to walk on water. You can do it! Imagine the possibilities.

But there’s another familiar, even famous, boat in the Bible. Remember the ark, best known for its crowd of characters two-by-two and the man who built it, Noah. Little ones everywhere recount the scene with songs and stories. You’ve probably heard it a million times, and I have, too. Ark. Animals. Lots of water. 40 days and 40 nights.

On the first day of the new year, ten and a half months after the flood began,the floodwaters had almost dried up from the earth. Noah lifted back the covering of the boat and saw that the surface of the ground was drying.” Genesis 8:13 (NLT)

Ten and a half months on a boat with your family and a ton of animals. Not quite the same as an afternoon at the zoo. And what’s worse, after Noah looked out the window and saw the ground drying,  he waited another two months.

Once the waters shrank to about knee deep I think my fists would have been pounding on the ark door. Get me out of here!! But instead of stepping out of the boat, Noah proved his faith by staying in the boat.

Sometimes our faith grows when we stay put. Sometimes it’s harder to sit than to step.

My oldest son, Jonah, and I traveled to Philadelphia for the Wild Card match-up between the Saints and Eagles.

What an adventure! Jonah loved to look out the plane window during take-off and landing. Flying above the clouds made him grin and giggle. But once the wheels touched down, Jonah’s patience wore thin. His attention span maxed out and what started exciting quickly became old news. What’s next? Get me out of here!

As we taxied to our gate, the plane parked short of the jet bridge.

“What are we doing? Why can’t we get off?” Jonah squirmed while he asked.

The pilot told us another plane sat at our stopping point. We had to wait until it moved.

The view out the window no longer captured Jonah’s attention. We were still. Nothing flew by at high speeds. He’s seen concrete plenty of times. He knew the scenery and had no interest in admiring it.

His young mind didn’t really process the hold up. I tried to explain,

“We’re the passengers. The pilot knows more than us. He sees things we can’t see.”

So we sat. We stayed on the plane until the pilot parked it and opened the door. Any other way would have ended with hurt or punishment. We could squirm and scream or we could take a deep breath and trust the pilot’s plan.

Surely Noah asked, “What are we doing? Why can’t we get off?”

By the time the whole thing was said and done he’d been on that boat for more than a year. Even if he built a nice penthouse on the top deck (which I highly doubt), that’s still a long time. How many times can a guy play duck, duck, goose before it gets old?

Do you feel stuck? Did you take God’s hand and step in faith and now you’re done? The rain stopped a long time ago and you’re ready to get off the boat.

Be still, friend. God will open the door. He knows things you don’t. He sees more than you. He will guide you safely to your destination. Hang in a little while longer.

Abram traveled through the land as far as Shechem. There he set up camp beside the oak of Moreh … Then the LORD appeared to Abram …” Genesis 12:6-7 (NLT)

Just as a road has red, yellow, and green lights, so do our lives. When God shows you a yellow light, slow down. It’s okay to stop. The light will turn green and you will arrive at your destination. But as you sit at the red light, you may notice something you may have missed otherwise.

Copyright © 2022 by Katy McCown @https://katymccown.com/2014/01/06/are-you-in-or-out/ No part of this article may be reproduced or reprinted without permission in writing from Lifeword.org.