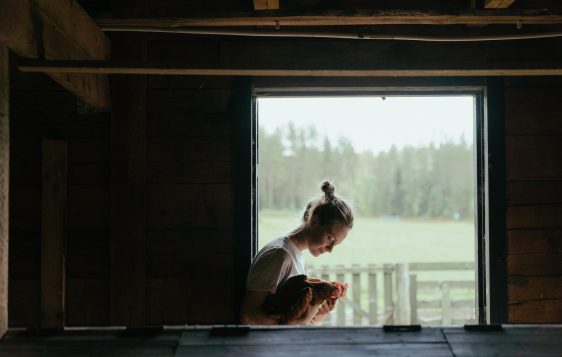 We live in a disposable society. “Just throw it away and get a new one,” tends to be our motto. And sometimes, it does seem easier to just get a new one.

We have a sweet little chicken barn on our farm, the elderly man who lived here built it with his son but that was several years ago. It’s built on a hillside, but it has no foundation. Actually, most of the bottom of the barn is bricks stacked on top of one another.

I honestly don’t know if the whole thing would fall down if we removed those bricks. Because various animals had dug holes underneath it and chipped away the bottom of its boards over the years, my husband’s first thought was, “Let’s just tear it down and build another one.”

I thought about it.

Honestly, that would have probably been easier. But the more I looked at it, I couldn’t bear to tear it down.

I really thought we could replace a few of the rotted pieces of wood, shore up the foundation and put some new tin on the roof.

It had a purpose – to house chickens – and I knew we could get it shaped up to serve its purpose.

It was worth more than to discard. In fact, it was beautiful.

And we, humans, are a lot like that barn. We might be rough in needing a foundation, but despite our failures and our brokenness, God still chooses to use us.

And God wasn’t done with Jacob yet either in Genesis chapter 28, despite his schemes and shortcomings.

“And [Jacob] dreamed: A stairway was set on the ground with its top reaching the sky, and God’s angels were going up and down on it. The Lord was standing there beside him, saying, ‘I am the Lord, the God of your father Abraham and the God of Isaac. I will give you and your offspring the land on which you are lying. Your offspring will be like the dust of the earth, and you will spread out toward the west, the east, the north, and the south. All the peoples on earth will be blessed through you and your offspring. Look, I am with you and will watch over you wherever you go. I will bring you back to this land, for I will not leave you until I have done what I have promised you.’” (Genesis 28:12-15)

In spite of all that Jacob had done: his deceit and lies towards his father and brother, most of us might think, “Is this really a man God wants to use? Why would he bless such a man? Shouldn’t God choose someone more worthy?”

But God had a plan and it was already laid out. And Jacob had been chosen for that plan before he was even born.

In fact, his name, Jacob, means to supplant, which is to trip up or overthrow.

Now don’t get me wrong, Jacob definitely messed up because he did things his way and not God’s way. But in spite of his failures and brokenness, God still chose to use him

And the same God still chooses to use broken people today.

It’s a humbling thought that God is so gracious and merciful to us!

As I sat at the board room table of Lifeword, those very emotions ran through me.

I had been nominated and accepted to be a board member for Lifeword within the Baptist Missionary Association. And I was speechless (which doesn’t happen often) when Brother Donny Parrish called me and asked me to consider this role.

So, there I was, at this huge table of incredible people who God was using to do mighty things for His kingdom. As they spoke, I was in awe of the amazing work that’s being done across the globe through this organization and these people. It took everything I had not to burst into tears.

Lord, how could you want to use me? Of all the people you could have chosen, I am not worthy to sit at that table! In my mind, there are far greater people, who are more educated and worthy of this position, but God allowed me to be there.

To sit in that chair.

In spite of my failures and brokenness, God still chose to use me.

He sees us differently than we see ourselves and I am forever grateful.

He wants to use you too! He simply asks for our surrender.

Do not think your life is easily disposable. You matter to God. He loves you!

And He offers you a seat at His table.

I can’t tell you how honored I am to be a part of God’s kingdom as a servant, a soldier and a daughter of the King.