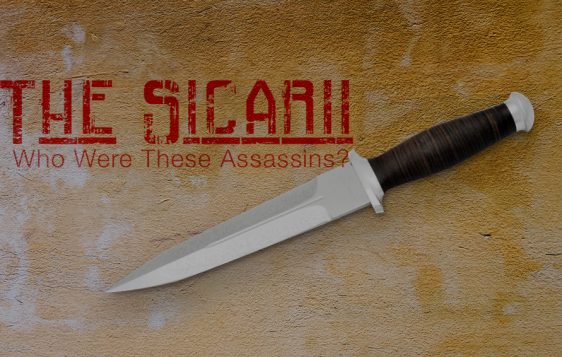 Welcome to another episode of Bible Tidbits powered by Lifeword. Today we are continuing a six-part mini-series about the six groups that formed between the Old and New Testaments—five of which are mentioned in the Gospels and Acts. They are the Pharisees, the Sadducees, the Herodians, the Zealots, the Sicarii, and the Essenes.

Paul is being interrogated by a Roman government official after a riot breaks out in Jerusalem and is asked if he is a Sicarii leader: “Aren’t you the Egyptian who led a rebellion some time ago and took 4,000 members of the Assassins out into the desert?”

Where is “Sicarii” in this verse? It’s what the New Living Translation calls “assassins.” Other translations call them “murderers” or “terrorists.” Why don’t English translations use the word “Sicarii”? It was a judgment call they made to help us understand the verse. They figure modern English readers know what assassins and terrorists are, so instead of unpacking “Sicarii” they go with a word everyone already knows.

“Sicarii” is Latin for the Greek word sikarios meaning “dagger man.” Josephus, the famous first-century Jewish historian, describes them as men who hid small daggers in their clothing, disguised themselves by blending into crowds, and used stealth to assassinate high-ranking government leaders and Roman sympathizers.

If you’re a gamer, just think of Assassin’s Creed—that’s exactly who these guys were. The Sicarii are the earliest known organized group of assassins predating the Islamic Hashishin (who Assassin’s Creed is actually based on) and the Japanese ninjas. To this day, the Spanish derivative of the word sicario is used in Latin America to describe hit men working for drug cartels. YouTube is definitely not going to promote this video.

In his writings, Josephus differentiates between the Sicarii and the Zealots. Until the revolt in 66 AD, the Zealots were demonstrators against the Roman government. The Sicarii, however, were violent from the beginning. And to go even further, they were so inclined to violence, that they would not hesitate to harm or kill their own countrymen if they thought it would further their ultimate goal of Jewish independence. This would ultimately be their undoing.

Sicarii were off-the-chart politically active and a very pro-Jewish culture. No surprises there. The great Jewish Revolt started in 66 AD and the siege of Jerusalem destroyed the city and the Temple in 70 AD. In 66 AD, tension between Jewish people and the Roman government reached a boiling point in Jerusalem. The Zealots took up arms and expelled Roman government leaders and Roman military from the city. This was the moment the Sicarii had been dreaming of for a long time.

But remember how I said that they were not afraid to harm or kill their own countrymen and that would be their undoing?

In the early part of the war, they raided villages near Jerusalem for supplies, killing 700 women and children. Inside the walls of Jerusalem, the Sicarii destroyed the city’s food supply to hasten the inevitable war between its citizens inside the walls and the Roman army outside the walls. This caused a civil war to break out inside of Jerusalem between the radical Sicarii, the more pragmatic Zealots, and the everyday citizens caught in the middle.

When the Romans breached the walls of Jerusalem in 70 AD and slaughtered residents of Jerusalem, one group of people escaped? That’s right . . . the Sicarii, who brought so much trouble on the city in the first place. Using stealth, a group of about 1,000 Sicarii escaped Jerusalem as it was falling and retreated to a cliffside fortress – Masada – that they had secured a few of years prior.

In an effort to stamp out all remaining Jewish resistance, the Romans laid siege to Masada in 73 AD with a force of 9,000 soldiers. As the Romans gained access to the fortress, the Sicarii set the compound’s buildings on fire and committed mass suicide. Only two women and five children survived.

Today, though the word sicarii is unfamiliar, the legacy of their last battle at Masada is legendary. Carrying the same significance as the Alamo for Texans, Masada is one of Israel’s top tourist attractions and the place where today’s Israeli Armored Corps are sworn in with the words “Masada shall not fall again.” It is remembered by Jewish-American lightweight boxer Cletus Seldin whose jacket states “Remember the Masada.”

So how, as Christians, can we apply the Sicarii’s story to our lives?  Well, here it is: “Thinking beyond the target “ is a principle in shooting that reminds those using firearms to be aware of what’s behind their target. Bullets can travel through the intended target—whether that’s a paper target in a practice situation or a person in a defense situation—so shooters must take that into account.

This same principle applies to our lives. Before we take any action, we really need to consider the consequences that will come with that action—and not just primary consequences, but secondary ones as well.

The Sicarii wanted Jewish independence from Rome. Their actions—political assassinations, sabotage, and other forms of violence—were intended to gain that independence . . .  and they did so  . . . for a while. Then the Jewish people were crushed, Jerusalem was destroyed, the Temple was torn apart brick by brick, their group committed mass suicide, and the Roman government—to make an example of them—formally annexed Judea into the Roman Empire, taking it from a semi-independent client state to a full Roman province.

In making Judea a full province and to further humiliate the conquered Jewish people, Rome renamed Judea after Israel’s ancient enemies, the Philistines. What was that name? Palestina. Even after Israel was re-established in 1948 in the wake of World War Two, this name and designation would cause trouble and division for its inhabitants. All because of a band of assassins 2,000 years ago.

Our actions have consequences and collateral damage—but they also have effects that reverberate for much, much longer than the action. Yelling at your child in front of others will hurt their feelings and embarrass them, but there’s a high likelihood that it will become standard operating procedure for your child and therefore that action will be repeated in the generations that follow you.

For example, drunk driving has serious consequences—we all know this, but beyond that, the loss of a family member killed by a drunk driver creates havoc in all who knew them and the ripple effect can change the lives of generations.

Bottom line: Think beyond the target. Before you do anything, think about all it will cost today, tomorrow, and even generations into the future.

Before we go, I want to remind you that Lifeword has a huge catalogue of Christian programming that will keep you encouraged and strengthen your faith. Times are uncertain, so if you want to listen and watch content that is biblically sound, head over to Lifeword.org—they’ve got it for days!
See you next time—grace and peace.

Copyright © https://www.youtube.com/watch?v=7A7sMBMQoDQ  No part of this article may be reproduced or reprinted without permission in writing from Lifeword.org.