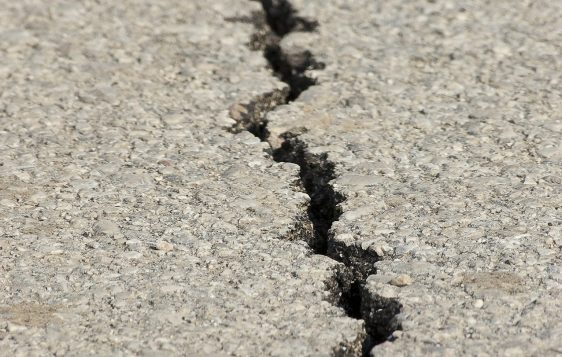 For years we’ve heard about the New Madrid fault-line being an epicenter for earthquakes and, “the big one” that could come at any moment.

When we were kids, we would listen to tapes and watch videos about what to do in the event of an earthquake. But my greatest fear, if it came, was being separated from my family.

I can picture it vividly in my mind: the earthquake would happen, the grounds would break apart and all of my family would be on one side and me on the other of a huge crevice.

There would be no way to reach one another.

I would be lost

The same thing happens when God confronts Adam and Eve in the Garden of Eden.

“But the Lord God called to the man, ‘Where are you?’ He answered, ‘I heard you in the garden, and I was afraid because I was naked; so I hid.’ And he said, ‘Who told you that you were naked? Have you eaten from the tree that I commanded you not to eat from?’ The man said, ‘The woman you put here with me—she gave me some fruit from the tree, and I ate it.’ Then the Lord God said to the woman, ‘What is this you have done?’ The woman said, ‘The serpent deceived me, and I ate.’” (Genesis 3:9-13).

God already knew the answers to these questions. But now, the fellowship between God and man has been broken.

Sin created a canyon between them.

Adam and Eve had tried to cover themselves and even hide in their shame.

And then, of course, we see the blame game occurring. Adam blamed Eve and Eve blamed the serpent.

It seems we are at a dead end. The fellowship has been broken, sin has created a divide, and it has an eternal consequence.

But God provides a way for redemption and restoration.

“And I will put enmity between you and the woman, and between your offspring and hers; he will crush your head, and you will strike his heel.” (Genesis 3:15).

Who is the seed of the woman? Jesus Christ. Here God says that Satan may bruise the heel of Jesus but in the end, Jesus would crush him.

Satan may have thought that when Jesus went to the cross and died that he killed Jesus and won.

But no. God was in control. Because three days later Jesus rose again!

“Oh, death where is your sting? Oh, grace where is thy victory?”

And Satan only has death waiting for him – he will be defeated.

By God making this prophecy in Genesis 3, He provides a bridge of restoration for humanity. We now have access to God across the canyon of sin that separates us. That bridge is Jesus Christ.

He sacrificed His life so we could have a restored relationship with God.

Today, He’s asking you to accept His gift and cross that bridge.

God desires a relationship with you through Jesus Christ.

Will you accept all of His promises for you?

Will you turn away from the old and embrace the new?

Will you surrender your will for His?

Jesus is the only way.