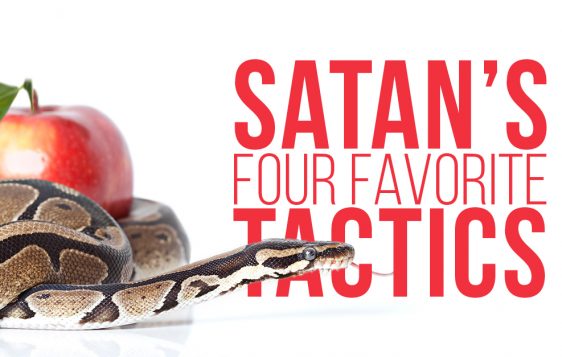 Satan has been sowing seeds of deceit in my family. This is not surprising or unique because Satan is a liar and the father of lies (John 8:44) and he prowls around like a roaring lion seeking someone to devour (1 Peter 5:8).

Sometimes he uses the same old things, sometimes it’s the unexpected. For us it looks like a couple of different things right now.

First of all, we are a single-income family of six living paycheck to paycheck on a minister’s salary, which is considered poverty level by our government.

We are so thankful for God’s good provision and try our best to be good stewards of what He has given. In the past, however, we acquired credit card debt. It was not a matter of living frivolously or buying “extras” we didn’t need, it was a matter of survival.

But God provided, we no longer use credit cards, and we are working to pay off the old cards completely (praise the Lord)! We want to start saving money, but it seems like any time we get ahead, something always happens!

Like four cars quitting on us in six months, then accidentally scratching the side of the truck we had borrowed and trying to pay for the damages!

It is easy to wonder if God will provide (even when He always has) or why He has placed us here.

The second thing sowing seeds of doubt is that my beautiful friend Danielle has cancer and a rare bone marrow disease. She has always been jubilant, bubbly, compassionate, and full of the light of Christ. She spent a year on mission in the African bush and is now married to a pastor.

Sometimes it is hard to understand why God chose her to go through a year and a half of pain, sickness, chemo, nausea, vomiting, throat sores that keep her from eating, a bone marrow transplant, countless days in a hospital, and more.

Satan’s tactics may vary, but they are not new. In fact, they are thousands of years old. Genesis old. Let’s take a look . . .

Genesis 3:1-6: “Now the serpent was more crafty than any other beast of the field that the LORD God had made. He said to the woman, ‘Did God actually say, ‘You shall not eat of any tree in the garden’? And the woman said to the serpent, ‘We may eat of the fruit of the trees in the garden, but God said, ‘You shall not eat of the fruit of the tree that is in the midst of the garden, neither shall you touch it, lest you die.’ But the serpent said to the woman, ‘You will not surely die. For God knows that when you eat of it your eyes will be opened, and you will be like God, knowing good and evil.’ So when the woman saw that the tree was good for food, and that it was a delight to the eyes, and that the tree was to be desired to make one wise, she took of its fruit and ate, and she also gave some to her husband who was with her, and he ate.”

Satan’s first tactic, the very first time we see him speak in the Bible, is to sow seeds of deceit, shadows of doubt. “Did God actually say . . . ?” This seemingly innocent question is laden with lies and leaves the door open for the woman to question God.

God had already graciously provided for His creation. After God made man in His image, He blessed them and said, “Behold, I have given you every plant yielding seed that is on the face of all the earth, and every tree with seed in its fruit. You shall have them as food” (Genesis 1:29).

As Eve listens to the lying serpent, she begins to add her own twists to God’s words, and as the serpent moves from lying about God’s words to calling God a liar (Genesis 3), Eve begins to believe the lie.

This is where all sin begins in our hearts – believing something untrue about God, His character, or what He says.

What is the lie Eve believed? That God is not good, he didn’t have her best interests in mind, was holding back, and didn’t really love her.

Think about it. If God was good, wouldn’t He have wanted Adam and Eve to have the best?

And look at the fruit. It was good for food, a delight to the eyes, and gave wisdom. Those are all good things, right? Clearly God must not want us to have what is good.

Or is it possible that what we think are good things aren’t always the best things? Could God have something even better than our eyes can see and our hearts imagine in store for us (1 Corinthians 2:9)?

Have we considered that if God gave us everything we desired we would be in a world of trouble?

Like Eve, not everything that looks good is for our ultimate good. When Eve saw yummy fruit dangling in front of her, she desired it more than God. In fact, she wanted to BE God because she wanted to be in control of her life instead of trusting God’s plan was best.

She believed the lie that she knew better than God what was good for her. She bought into the deception that God’s plans for her couldn’t possibly be kind, good or loving if He was withholding this obviously desirable fruit.

The forked tongue of the serpent stirred up a desire in Eve, which gave birth to sin (James 1:13-15). She took a bite of the forbidden fruit, and we all know what happened next . . .

We do the same. Satan doesn’t need any new tactics because the human heart is no better since the Fall (Genesis 6:5, 8:21). When the dollar amount in the bank account is less than the bills piling up, Satan hisses in our ear, “Why can’t you afford that? Does God really love you?”

When we see cancer ravish the body of our beautiful friend, Satan slithers, “Why her? Surely God wouldn’t want her to have cancer. Is God really good?”

When we struggle with the duties and roles of motherhood, the disobedient children, the job, or the place God has put us in and think, “I just want something else! It shouldn’t be like this!”

Satan smiles as we take a bite.

So what can we do when we find ourselves lured by the Liar and dwelling in doubt?

Remind ourselves of the goodness and sovereignty of God, and His steadfast love to His children:

“Do not be deceived, my beloved brothers. Every good gift and every perfect gift is from above, coming down from the Father of lights with whom there is no variation or shadow due to change” (James 1:16-17).

James’s warning? Don’t be deceived. God gives good gifts to His children, and that will never change.

Christian, God is working all things for your ultimate good, to make you more like His Son, until death when you are glorified with Him.

Philippians 1:6 promises “He that began a good work in you will bring it to completion at the day of Jesus Christ” (Philippians 1:6).

Non-believer, have you ever considered that God is working all things to draw you to himself to rescue you?

Do not be deceived by the lies of the devil when life is hard. God is perfect and good and loving. And so is His sovereign plan for you.

Will you trust Him?