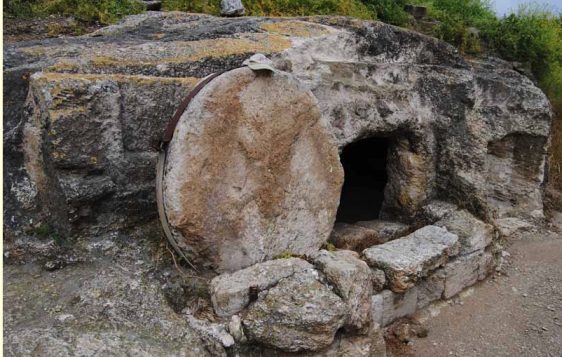 The conception and rise of Christianity in the first century was due to the resurrection of Jesus, and so profoundly did he disrupt the status quo by coming back from the dead that many who doubted and had a wrong view of him subsequently began to worship him as God on earth.

The resurrection was the focal point of all of the early believers’ hopes, and for them it was a way of life:

To live in the newness of an identity now given to them by Jesus.

Nothing could convince them that any other way of life would be acceptable. As eyewitnesses to the risen Jesus, they enthusiastically pursued the new type of humanity that he ushered in…

The early believers would be shocked to know that today’s followers of Jesus now talk about the resurrection only one day a year, Easter Sunday.

In fact, the resurrection most assuredly would have been on their lips every time they met together.

We have cheapened this doctrine to something we only talk about seasonally when, in fact, Jesus calls us to live out our own resurrection.

He calls us to live new lives in Christ that otherwise we would never live without his Spirit, and he invites us into this reality by asking us to die to ourselves

But in this death to ourselves we now are raised with Christ. The concept of the resurrection is the foundation of everything we can now believe is true about who Jesus is and what he said he was doing.

So, is it a viable option to believe that Jesus actually rose from death?

Dead he surely was, wrapped in upwards of 100 pounds of linen and spices to be put inside a tomb.

His blood no longer flowing

Writers and historians alive at that time categorically agree. In fact, at least twelve of them cumulatively confirm that Jesus was a virtuous man from Nazareth that performed unusually great feats and was sentenced to death by crucifixion under Pontius Pilot.

His life and death are doubtlessly confirmed and corroborated by Christians and non-Christians alike.

Although Jesus’ life and death are fixed in history, they are both attached to the reality of his resurrection. And all who hear of this now have to deal with how the Jesus movement not only survived, but thrived unlike anything else the world has ever experienced.

Because of this, the burden of proof of the resurrection is on the skeptic.

The skeptic has many theories about how Christianity got off the ground without a resurrection:

His disciples all hallucinated and saw him in “spirit”.

His body was stolen.

All of these claims can be easily dismissed, but there is one account that seems logical. It goes something like this:

Ancient people didn’t have science, and the age of enlightenment had not yet come, so they naturally believed in superstition and magic. They would have easily believed the reports about Jesus being raised from the dead, and Jesus’ followers were devastated when he was killed, so they began to talk about how they interacted with him in their hearts and in spirit. Some might have even claimed that they saw Jesus visibly. Over several decades these stories evolved into stories about Jesus being raised physically, and gospel accounts of the resurrection were put there to corroborate these claims.

While this is tempting to believe, the problem is that it lacks historical and cultural context.

For one, the first accounts of the empty tomb are not found in the gospels but in the writings of Paul, which everyone agrees were written just fifteen years after Jesus’ death. In Paul’s letter to the Corinthians he makes his appeal to them by saying that not only did Jesus appear to his disciples, but also to over 500 brothers at the same time, most of whom were alive to talk with for further confirmation.

Paul’s letter was a public document meant to be read out loud, and he was inviting anyone who might have been skeptical to go and talk with the eyewitnesses themselves.

Another important fact is that Paul received first hand everything that he told them. This wasn’t like the telephone game where a phrase or story evolves over time. The reports of the resurrection came directly from the mouths of the people who were walking and talking with Jesus.

Additionally, the accounts of the resurrection state that women were the first eyewitnesses to the empty tomb. Women had a very low social status and were thought to be incapable of testifying in court.

So if these stories were fabrications, then they would be of no advantage at all; in fact, it would only undermine the credibility of the testimonies.

N.T. Wright notes that there must have been great pressure to actually change the accounts and remove the women from them, but the disciples would not do so to guard the integrity of the account and probably could not do so anyway because the records were already too well known.

Timothy Keller says, “Nothing in history can be proven the way we can prove something in a laboratory. However, the resurrection of Jesus is a historical fact much more fully attested to than most other events of ancient history we take for granted. Every effort to account for the birth of the church apart from Jesus’s resurrection flies in the face of what we know about the first-century history and culture.”

In other words, the resurrection of Jesus gives definitive evidence for the birth and rapid growth of the church.

Without the resurrection, the Jesus movement would never have taken off. It would have stopped as any movement does when its leader dies.

Furthermore, the disciples that we see being cowards before the resurrection all died gruesome and courageous deaths, and no one would die for something that they thought might be untrue. We can see a total transformation in his followers because of their newly qualified trust in Jesus, and we have documentation that dates only within a few years of the actual event.

What does the reality of this mean?

It means that the plan God put into place to defeat human evil was through the birth, life, death, and resurrection of his Son.

It means that God actually binds himself to the human condition.

It means that Jesus absorbed all of the consequences of our sinfulness and allowed it to defeat him.

It means that he willingly went to the cross to defeat that consequence, death,through his resurrection.

It means that death no longer has the last word.

If Jesus didn’t rise from death, then nothing he said matters.

But if Jesus did rise from death then everything I think about the world, myself, and God I now have to rethink and let it be rebuilt by the reality of the resurrection.

Now everything that he said matters.

This means that we have a living hope that is sustainable and faithful to give us life beyond what we could ever imagine.

We can now have confidence that God has a life and a future in store for us.

We can live in light of this reality with great joy and confidence and live a new life in Christ with a new direction to press toward and a new identity to live from.

We die to ourselves and subsequently we’re raised with Christ.

Unique to anyone in history, Jesus gives us a living hope.