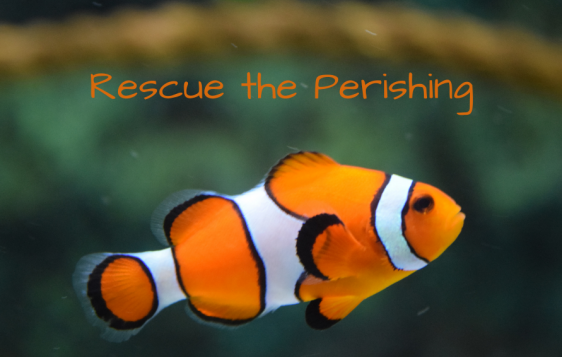 On Saturday I made a trip to the town I pastored in for a few years, Hot Springs. I had a couple of errands to run while down there. After I finished up all the “business” I had to attend to, I decided to make a pilgrimage of sorts to my old special spot with God.

We call it “The Cool Pool” or “Blue Hole”.  It’s a spot off of scenic Highway 7 South down in the woods.  While it’s not much more than a creek, there are two beautiful waterfalls next to each other that have a perfectly formed rock seating area to admire them from.  It’s almost as if God wanted to build a tiny amphitheater so folks could comfortably enjoy His creation. I spent some time sitting and talking with Him, and after a while it was time to go.  As I was walking to my car, it happened.

There on the ground, flopping around right next to my car in the dust and dirt was a small fish. It was probably only about three inches long, at most. It was covered in dirt, and was flopping around struggling to survive.  On its own it would never make it – the water was down the hill, and about 60 feet away. That’s when I made the snap decision to pick it up and save the day!

I carried that little fish down the rock path, back to the water it was so desperately yearning for. When I placed it back in the water it didn’t move much for a moment, and I thought maybe I had been too late. But just about the time I was about to give up hope, the fins began to move and that fish took off, ultimately swimming down to the bottom to take refuge under some rocks.  And that’s when God spoke.

I felt Him say to my heart, “This is it – this is what you’re supposed to be doing, Blake! Rescue the perishing!”

All around me, every day, there are people struggling to survive. Like a fish out of water, they are merely flopping around desperately hoping for someone to carry them to the Water! The Water is Christ, and without Him we’ll never make it!

Of course, there have been times in my own life when I felt like that fish. I felt covered with dirt, totally out of my element, and as dry as a bone. I felt that I’d probably never taste the refreshing flavor of the water again. I was completely helpless to do anything about it on my own, too.  And that’s when Jesus would send someone whose love and friendship was true and not flimsy or fake, to come along and carry me back to Him.

Today – more important than any other responsibility or job – it’s our job to rescue the perishing. Carry them to the Water of Life – where they’ll never thirst again!

Copyright © 2021 @https://pastorblakeman.wordpress.com/2012/02/28/rescue-the-perishing/ No part of this article may be reproduced or reprinted without permission in writing from Lifeword.org.