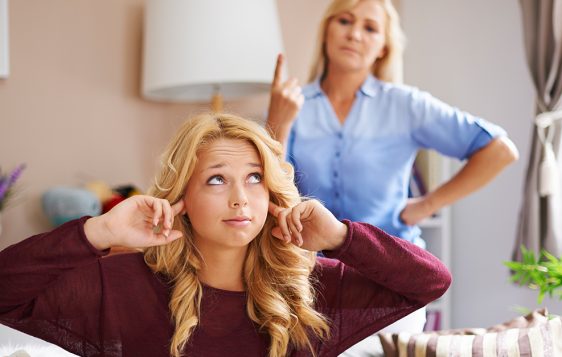 A salvation story doesn’t have to be R-rated to be powerful. We may not all be saved from a life of crime, drugs, or persecuting Christians (like the apostle Paul). Sometimes it is what God protected you from doing that testifies to His glory and grace.

I grew up as an only child in a half-Christian home. My mom was a believer; my dad was not. I can count on one hand the number of times my dad went to church (a last ditch attempt to save his marriage).

My mom took me to whatever flavor of church she was into at the moment. When she was feeling in touch with her Catholic roots, we did our fair share of kneelers, making the sign of the cross, and dabbing ourselves with holy water on our way out the door. I even made my First Communion and baptism (at age seven – I was a latecomer) in the Catholic church and started Confirmation classes. We went to a Lutheran church for a short stretch when she worked at their daycare. We also frequented a non-denominational mega-church with a giant worship band, colored lights, and projector screens.

My mom quoted Bible verses at me and even had scripture written on her wooden paddle (which she never used). She wrote, “Jesus loves you!” with smiley faces on everything and sang children’s Bible songs to me. I will forever be grateful for her Christian influence in my life that tried to point me in the right direction. It must have been hard for her to stand firm as the lone believer in an abusive marriage.

But even after all of her concerns for me to know about Jesus and taking me to church every week, I was still a rebellious child.

To most, it would have gone unnoticed. I never did any of those outwardly “heinous” sins. I was quiet and reserved, made straight A’s, and was well behaved in school.

But in my heart I had idols.

I didn’t know what idols of the heart were as a child. But I did know I didn’t like to be told what to do and I certainly didn’t like being punished for disobeying. I thought it was stupid and unfair. I thought I was always right. I argued with my mom at every turn, trying to prove just how “right” I was. I never backed down.

Unless my dad was around. I never disobeyed or argued in front of him because I was afraid of him and his horrible temper. He never had to spank me because a simple threat was enough to scare me into submission.

My mom, on the other hand, gave up on trying to spank me. Whenever she tried to discipline me in other ways, such as groundings, I would argue or throw a fit until she gave in.

As marriage and abuse issues escalated for my parents, my behavior in school started to not be so “golden”. I would act out for substitute teachers and started hurting other kids. When I did get sent to the principal’s office, I thought every string should be pulled in my favor to get me off the hook instead of owning up to my sin and accepting the consequences.

When my parents finally divorced when I was 13 (after 20 years of marriage), it was just my mom and me. Without that fearful father figure looming in the background, and a mom who let herself be stepped on more than a sidewalk, my rebellious and disrespectful heart was given free reign.

We fought like cats and dogs through my early teen years, acting more like sisters than mother and child. We had horrendous screaming matches filled with “I hate yous” (from me) and slamming doors. I always got my way. And one of those “ways” was to stop going to church.

During that time, the turmoil in my relationship with my mom only increased. We still had screaming matches, but now at times we would shove each other. Often I would shove her all the way back into her room. I even shamefully recall slapping her a couple of times. My rejection of authority was now becoming physical as I tried to exert my will over hers.

In public, you still probably wouldn’t have been able to tell what was going on inside my heart. I was just a “normal” sassy teenager, but still pretty much a “good” kid who did well in school. But if my struggle with rejecting authority had been allowed to to reach a boiling point, I’m afraid of what dangerous roads would have lain ahead for me.

By God’s grace, things were about to change.

I started going to church again (separate from my mom) my sophomore year of high school at the invitation of a friend. Providentially, it was the same Baptist church my mom had sent me to for VBS (vacation Bible school) every summer as a young child (of which I had fond memories).

I started attending regularly and got involved in youth group. It was at a Youth Discipleship Weekend where I tuned in to a guest preacher talking about sin. I have no idea who he was, but God used him to bring me under conviction that I was a sinner and needed to get right with God, and that Jesus Christ was the only who could save me from my sins. I repented from my sins that night and turned to Christ.

By God’s grace, I fixed my gaze on Christ and have never looked back. From then on, I was at church any time the doors were open. I became actively involved in youth, service projects, singing in choir and praise band, and volunteering in the church office.

That doesn’t mean that I haven’t sinned since or gone through seasons of depression or apathy. But God has always kept me in the palm of his hand, as his Word promises his children. I have never been in a place of sin where God’s loving, correcting hand hasn’t disciplined me and restored me by the convicting power of the Holy Spirit. In his loving kindness he has always given me the grace to repent and keep trusting him.

God’s sovereign plan for my life involved going to a Baptist university, meeting a young man who was studying to be a pastor, and marrying him. It has involved us having nine children, losing one through miscarriage and one through stillbirth. It has involved homeschooling and moving four times and struggling at different churches.

God has been faithful all of these years. He has protected me from more pains and opportunities to sin than I can probably imagine. He didn’t rescue me out of a life of drugs, sex, or crime, (not for lack of opportunity), but he did protect me from those things.

He did rescue me from the idol of self-rule, wanting to be the little g “god” of my own heart. Ultimately, that is what God saves us all from. And I am forever grateful to the Savior of my soul.