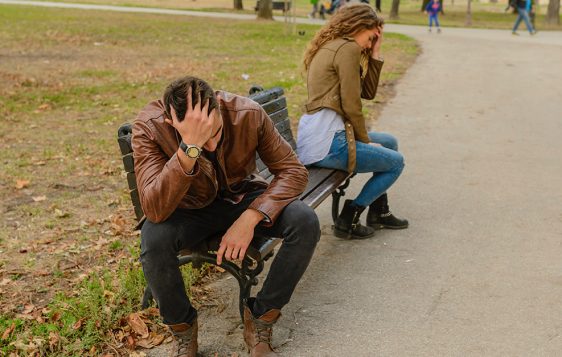 And yet in American society, it has become the norm. In fact, the United States has the sixth highest divorce rate in the world.

The most commonly referenced divorce statistic is that almost fifty percent of all marriages in the United States will end in divorce or separation. No one really knows where that statistic originated, however, and according to an April 2017 Psychology Today article, it isn’t exactly true.

In fact, the writer says, “overall divorce rates have been falling for a few decades. The truth is, the average couple getting married today has more like a 75 percent chance of staying married. That means that only about 1 in 4 recent marriages are likely to end in divorce.” https://www.psychologytoday.com/us/blog/heart-the-matter/201704/do-half-all-marriages-really-end-in-divorce

Check out this article as well, which is about divorce rates among Christians:
https://www.focusonthefamily.com/marriage/divorce-rate-in-the-church-as-high-as-the-world/

Whatever the statistics, divorce doesn’t solve the problems that couples have, and first-time divorcees are often likely to divorce again. I guess if you have been divorced once, it’s seen as a viable option for round two or three if your spouse is “incompatible” or you “fell out of love with them.”

So why does it still sound so ugly? Because, I believe, divorce was never supposed to be the plan or the design of creation.

In the garden, Eve was made to be Adam’s helpmate and for the two to be one. Marriage is all about unity, and divorce means the split of that unity. It’s a covenant agreement, a contract for life, that is never supposed to be broken.

No one goes down the aisle on their wedding day and attaches, “and if this doesn’t work out and we give up, we can always divorce each other” to the vows. Because no one wants a divorce! It’s an ugly word describing a broken relationship between two people.

There are several justifiable reasons for a divorce including adultery (because the other person violated the contract of only loving the person they swore to love until death,) abandonment or abuse. By no means, if your spouse is harming you or your children physically, emotionally or mentally, should you put your life or the lives of your children at risk.

God doesn’t want you to live in fear, especially not by the person who vowed to love you as they love themselves. I see that as a contract violation.

However, those three justifications are only there because we live in a fallen world and a broken society in desperate need of Jesus.

I grew up in a divorced home, so I know the effects first hand. Not only were my parents split, but I sometimes felt torn, especially around the holidays and breaks. I had to make sure I had enough time to go to both homes.

I’m definitely not saying I blame my parents for the divorce because I was only three when the divorce happened. I have scarce memories of them actually together; it is how I grew up and I’m not complaining.

Being from a “divorced home” has never been something I have felt sad about or something I’ve allowed to hold me back in life. God brought good out of it.

God has a purpose in pain and he can bring good out of any situation and I definitely have experienced that in my life. It is also a biblical concept!

Remember Joseph from the Bible? That guy who got a coat of many colors and all of his brothers were jealous of him and wanted to kill him, but instead, they sold him into slavery?

Then it just keeps getting worse for him . . .

His master’s wife falsely accused Joseph of sexual assault, and he was thrown in jail for something he never did!

I don’t think God liked the fact that there was slavery or a need of a jail or that he was mistreated. But. God used this situation for good! Because the story gets better for Joseph and he doesn’t rot in jail . . .

He becomes second in command of all Egypt because God allows him to interpret Pharaoh’s dreams about the fat and skinny cows and grains… AKA seven years of plenty and seven years of famine, so Joseph was able to stockpile the food in preparation for those hard times.

And those hard times reunited the family! His brothers may have been tested a little bit and one of them learned what it felt like to be in jail, but then Joseph says, “You planned evil against me; God planned it for good to bring about the present result–the survival of many people” (Genesis 50:20).

In short, God can use bad circumstances for his glory. Therefore, divorces can be seen as ugly, yes, but also as circumstances God can bring something good out of.

However, when we read the Bible, there are only a handful of passages that actually use the word “divorce.” Not only that, but there are not many examples of divorced people.

The only Bible character I could think of who was divorced is the Samaritan woman at the well who had five husbands . .  . But Jesus still talked with her and invited her to his everlasting kingdom. Then, she was the one who witnessed and testified that she had found the Messiah and was able to physically lead people to Christ.

God had a purpose for her life, despite her divorces.

And God has a purpose for your life too, no matter where you are. Single, married, divorced or from a divorced home.

If you are single, stay single until you find and marry your best friend.

If you are married, personally and idealistically I think Jesus Christ says it best in Mark 10:9: “what God puts together, let man not separate.” That is the goal, to love one person until death parts us.

If you are divorced, God loves you and he has a purpose for you!

If you are from a divorced home, God can use any circumstance for his glory.

And if you are a Christian, let’s remember what marriage is a beautiful symbol of: unity and commitment.

Also in the Bible, Jesus is described as the groom and the church as the bride in the book of Revelation. So metaphorically speaking, we are married to Jesus Christ, as in united and committed to him for eternity. And I for one do not have any desire to divorce, or be separated from his love.

“For I am convinced that neither death nor life, neither angels nor demons, neither the present nor the future, nor any powers, neither height nor depth, nor anything else in all creation, will be able to separate us from the love of God that is in Christ Jesus our Lord” (Romans 8:38-39).