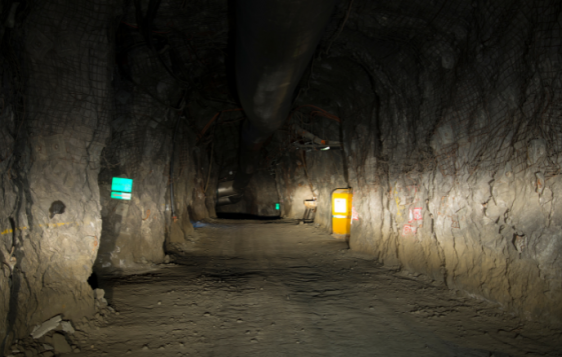 In October of 2010, the world watched as one by one, 33 Chilean men were rescued from a collapsed mine. When the first miner broke the surface, I remember there were cheers and tears after 68 days of being trapped 2,000 plus feet below ground. I couldn’t peel my eyes from the screen as we waited for that first miner to top ground in the tiny “rescue pod” being raised and lowered through the tunnel that led down to where they were trapped. I joined people all over the world in shedding a tear (or two . . . or a hundred) at the sheer joy of knowing he was safe. One miner up, 32 to go, so the rest of them awaited their rescue . . .

The way it was described on the news, the mine was a desolate place. I just couldn’t help but think about how depressing it seemed. No sunlight at all, total separation from family and friends, limited food rations, and every moment living with the possibility of a total mine collapse. That doesn’t sound like a place I’d want to spend even one moment, let alone two plus months. Yet there they are – trying to make the best of a horrific situation.

Throughout the Bible, sin is equated with darkness. God’s Word says time and time again that sin brings with it separation from God, and a darkness that even the miners trapped below ground can’t fathom. And whether we like it or not, we are born into that sin. Every single man, woman, boy, and girl born to this world since Adam (except Jesus Christ Himself) has been born a sinner:

So there we are – wrapped up in sin’s darkness without hope, desolate, and headed for an eternal destination called hell . . . a place more infinitely terrible than our minds can fathom. But look back almost 2,000 years to a hillside . . .

On that hillside is a little group of crosses. And on that center cross hangs an innocent man named Jesus. He’s never done anything to anyone. He’s never broken a crime in man’s law or God’s. He’s pure, holy, just, righteous. Yet for these few moments, he’s a murderer, a thief, a rapist, a pedophile, a liar, and a cheat as he carries the weight of every sin ever committed.

For these few moments – and forever – Jesus is the sacrificial lamb sent to pay the world’s sin debt with His blood spilled out on that cross. And for these few moments, God the Father turns His back on Him, because He can’t look upon sin.

And with the words, “It is finished,” Jesus seals the payment for our sin and dies. And in that moment our sins are nailed to His cross and disposed of forever.

Because of Jesus’ time on the cross, it was possible for me at the age of 14 to fall on my face and ask God for forgiveness of my sin, for a relationship with Him, and for a changed life.

You see, you’re trapped in a mine. And collapse is coming, only it won’t just last a short time – it’ll last forever. And the place you’re headed? Horrible. Today He offers you rescue through what He did on the cross so long ago. And all you have to do is accept it by asking Him to forgive your sin and be your Savior and Lord.

Your rescue pod has arrived . . . will you get inside?

That’s just a thought, and I welcome yours.
Until next time,
Blake

Copyright © 2021 by Blake Martin @https://pastorblakeman.wordpress.com/2010/10/13/rescue/ No part of this article may be reproduced or reprinted without permission in writing from Lifeword.org.