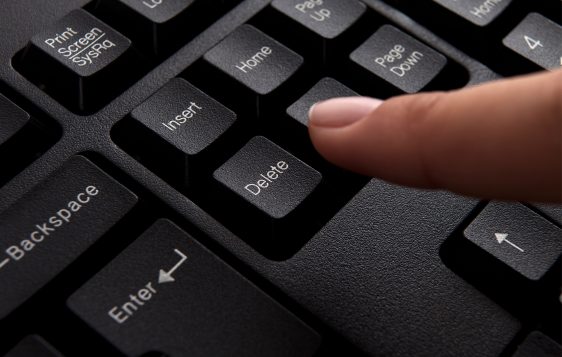 The days of the typewriter. Do you remember those? You had to practice and practice to make sure you could type well, because if you messed up, there was no way to erase it off the paper. There was only one thing you could do.

It was originally called “Mistake Out”. Invented in the fifties by a secretary at a bank who was frustrated at her typing mistakes, Bette Graham used her talents in art to create the cover up.

And that was the best it could do. Just mask the mistake. It couldn’t actually remove it. But it did the job for a while, until the computer came along and there was this beautiful addition the keyboard, the delete button.

With a computer, you could type out a word and then delete it if it wasn’t what you wanted, if it was spelled wrong, or if the sentence needed work.

White out isn’t needed for that anymore. Just print out a correct copy. No more cover up.

Leviticus 16 details the instructions for the Day of Atonement. This was a huge day for the Israelites! To atone means “to cover”. In the Old Testament, sins couldn’t be removed, so the people had to have a day where all of their sins would be covered by the blood of the sacrifice. Just like the old typewriter days.

“Then shall he kill the goat of the sin offering, that is for the people, and bring his blood within the vail, and do with that blood as he did with the blood of the bullock, and sprinkle it upon the mercy seat, and before the mercy seat: And he shall make an atonement for the holy place, because of the uncleanness of the children of Israel, and because of their transgressions in all their sins: and so shall he do for the tabernacle of the congregation, that remaineth among them in the midst of their uncleanness.” (Leviticus 16:15-16)

Cover their sins. That’s all they could do.

When Jesus came to earth, He became the sacrificial lamb. Blameless, spotless, perfect. Jesus Christ’s sacrifice on the cross, was the atonement for our sins once and for all. His blood didn’t just cover our sins, it removed them.

“For this is my blood of the new testament, which is shed for many for the remission of sins.” (Matthew 24:28)

“and all are justified freely by his grace through the redemption that came by Christ Jesus. God presented Christ as a sacrifice of atonement, through the shedding of his blood to be received by faith. He did this to demonstrate his righteousness, because in his forbearance he had left the sins committed beforehand unpunished.” (Romans 3:24-25)

Christ was able to do what nothing could before; He was able to remove the sins of people.

Are you still living in the days of the typewriter where you are trying to cover up your own sins? Or are you living in the new life of Christ where like with a computer, your sins are deleted?

“He hath not dealt with us after our sins; nor rewarded us according to our iniquities. For as the heaven is high above the earth, so great is his mercy toward them that fear him. As far as the east is from the west, so far hath he removed our transgressions from us.” (Psalm 103:10-12)