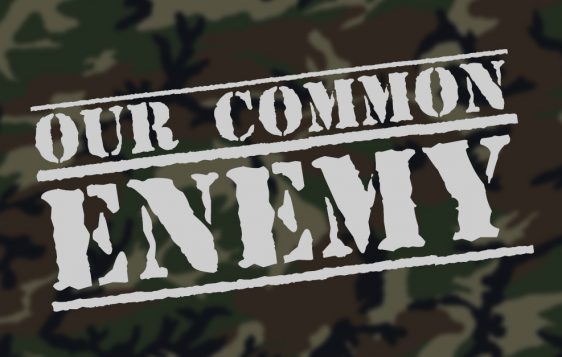 It’s an environment where Christians shine. Or, at least, they should be.

When darkness prevails, as it is currently, true followers of Jesus must stand out. Right? But when it is Christians pointing fingers, making enemies, policing people’s sin, and overall hating non-believers, we aren’t following the ways of Jesus.

Satan is the enemy of every believer. In this there can be no doubt. The Bible is clear: He is the adversary, the accuser, our foe, the evil one, the ruler of this world’s darkness, the god of this age, a liar, and a murderer.

We war with him daily, every hour really. This is no surprise. But what we’ve forgotten is that he is also the enemy of unbelievers. The unbeliever is not pals with Satan. He hasn’t formed an alliance to take out the church.

No, Satan isn’t in the business of forming allies. His sole desire is to blind people. To take them captive. To make them hostages. To freeze people in their sin.

In this sense, believers and unbelievers are on the same side. We have a common enemy. Our great desire, then, as Christians, is not to broadcast our moral superiority, or to point fingers, or to expose an unbeliever’s sin all the more. That’s not how we stand out, because that’s not how Jesus did it.

Our great aim toward unbelievers is to labor in a warm, gospel-saturated love to see them released from the devil’s captivity.

Like, gauge your heart real quick. Think about an unbeliever in your life. Do you care more about proving them wrong or, in love, to see them no longer trapped in Satan’s snare? That right there, your motivation, shapes how you approach and relate with them, from your words to your tone.

I’m awful at this. I just want to be right and walk away self-justified. What if, instead, I deeply wanted my unbelieving friend to see Jesus for who he is and experience the all-encompassing freedom and rest Jesus alone offers?

As Jerram Barrs writes, “Understanding that Satan is not only the enemy of believers but also the enemy of unbelievers should help us see more clearly why we are called not to abuse, insult, or condemn people around us no matter what they believe or how they live.” Even if they’re insulting us!

O, the depth of transformation we would see in our nation! How the culture of conversation would shift. Light would shine. And people would see.