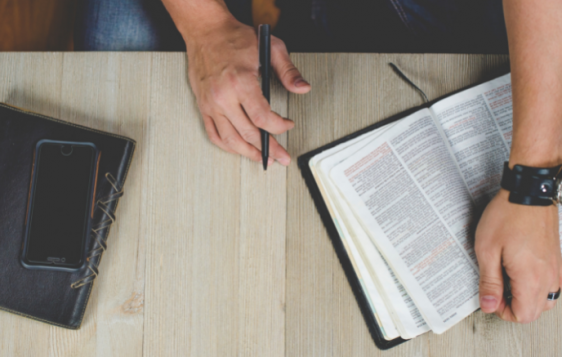 Our moral behaviors stem from our theological beliefs—even if we say we don’t believe in God. Take one of the most basic “Thou shalt nots” –  murder –  as an example. We don’t commit murder because there was a poster in kindergarten that said it’s wrong. We don’t murder people because we see life as valuable. And because we believe God created us in his image, we believe life is sacred. If we take abortion as an example, pro-abortion activists don’t argue that murder is OK, they argue that it’s not really murder because the child does not yet have life. That’s actually changing a belief so a behavior can be altered.

Most of Paul’s letters have a general flow that they follow—theology in the front, application in the back. In other words, most of his letters start by discussing doctrine—theological truth—and then pivoting to practical matters—life application.

Paul’s letter to the Romans is the best example of this flow: It has sixteen chapters and takes about thirty-five minutes to read. The first eleven chapters are theology heavy and the last five chapters are very application heavy. Romans 12:1 starts this way: “And so, dear brothers and sisters, I plead with you to give your bodies to God because of all he has done for you.” Other translations begin the verse with therefore. Whether it’s “therefore” or “and so”— Paul is saying in light of all the things we BELIEVE, here’s what you DO.

Why does Paul use this pattern? Because of this universal truth: What we believe determines what we do.

Our beliefs determine our behavior.

Our doctrine determines our doing.

Our convictions determine our conduct. (That’s all the alliteration I have.)

Such a truth goes well beyond the Bible and Christians. Coaches, for example, believe that a certain style of play is most effective so that’s how they lead their team. National leaders’ philosophies are often called doctrines—the Monroe Doctrine, Truman Doctrine, Eisenhower Doctrine, Kennedy Doctrine . . . you get the point. All of these doctrines determined how they conducted foreign policy.

But it’s not just leaders like coaches or presidents, it’s everyone. What you genuinely believe guides your decision making. That’s why we have theology in the front and application in the back—because beliefs determine behavior. So when you read Paul’s letters, you can make connections between what theological truth he’s teaching and the life application he’s offering.

For instance, in Philippians 2 Paul writes a beautiful theological truth about how the attitude of Christ is humility—verses six through eleven. Then in verse twelve, he pivots to how humility leads us to obey God, live pure lives, and sacrifice ourselves for others. Beliefs determine behavior.

So when you’re reading Scripture, always connect theology to the command.

Why do we not steal? Not simply because God says it’s wrong—it’s wrong because God commands us to love and look after each other—stealing is the opposite of that.

Why do we not commit adultery? Not simply because God says it’s wrong—it’s wrong because God ordained marriage to be between one man and one woman for life—adultery is outside of this.

Beliefs determine behavior, doctrine determines doing, and conviction determines conduct. That’s why theology is in the front and application is in the back.