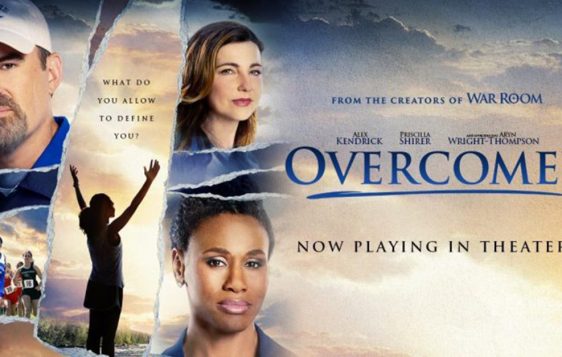 Overcomer is a feel-good, faith-based movie that challenges you to think about your true identity.

In the aptly named Christian film by the Kendrick brothers (makers of War Room and Fireproof), every character has something to overcome: health, job/financial stress, unforgiveness, or past mistakes and regrets. The biggest issue to overcome is answering, “Who am I?”

Small-town basketball coach, John Harrison, loses his team after a major plant shut down causes many families to leave. He is asked to coach a single-runner cross-country team consisting of an asthmatic girl, fifteen-year-old Hannah Scott. She is a quiet-demeanored runner living alone with her grandmother.

Alex Kendrick (Harrison) basically plays the same character he played in Facing the Giants, a 2006 Kendrick Brothers film. Thankfully his acting has significantly improved since then.

Coach Harrison accidentally meets the other main character, Thomas Hill during volunteer hospital visitation. Thomas is a blind, former cross-country runner and meth addict who turned his life over to Christ. His witty, endearing personality makes him my favorite character in the movie.

Although the plot moves forcefully fast through major emotional climaxes and resolutions, it does a good job of highlighting the main point: finding your identity in Christ alone.

As John revisits Thomas for coaching advice, he finds himself getting a gut-check. Thomas continues to ask John who he is until his long list of descriptors dwindles down to his last resort: “Christian”.

The question looms for all of us, “What have you allowed to define you?”

This is a crucial question in our autonomous, self-defining culture, even for Christians who claim their identity is in Christ.

Hannah discovers the answer to this question after her high school principal (played by Priscilla Shirer) shares the gospel with her and she asks Jesus into her life.

I will nit-pick here for a minute because this is the crux of any Christian movie, and it’s imperative to get it right. Although Shirer’s character asks Hannah if she knows why Jesus died on the cross, her explanation is less than satisfactory.

She mentions that we were made to know God, we reject Him when we sin (although the definition of “sin,” we assume, is not explained), and that Jesus died and rose again to make a way for us to “get right with God” if you trust Him.

There is no mention of grace or HOW his death makes a way for us to be right with God (propitiation). This could come across as a works-based, pull-yourself-up-by-your-own-boot-straps theology. There is no call to repent and believe, the biblical response to the gospel.

Also, the doctrine of justification is explained as a progression instead of an immediate washing away of sin when she says that Jesus “starts cleaning” out your heart after you ask Him to come into it. (Our sanctification is progressive, not our justification.) As a platform for millions of people to hear the gospel, this scene needs laser precision.

Overall, it was an enjoyable movie. I encourage others to watch it. For the Christian movie genre, it was the highest caliber yet. Yes, the plot was predictable. Yes, it had every type of emotional cliché. (And, yes, I cried anyway!) Yes, everything turned out great in the end (well, almost everything – NO SPOILERS!).

Overcomer challenged my faith in some areas and encouraged it in others. It hit the nail on the head that identity in Christ is the only one that truly matters.

Most importantly, it displays the name of Christ as the only true way to overcome the world.