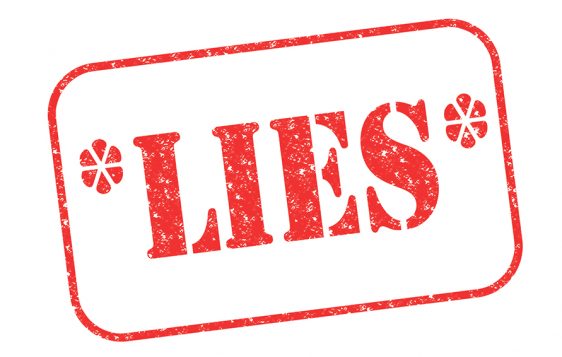 Whether it’s being honest with ourselves or with other people, it involves opening our eyes and taking a good hard look to invoke positive change. Because when we refuse to see, or when we are in denial, that’s when we become stuck, and we can’t move forward.

Not everyone likes being honest. Sometimes, it’s easier to not see or not believe something is happening. It’s easier to lie.

A wise man once told me, “We are never more like the devil than when we lie.”

Lying can take many forms . . . It can be living deceitfully, choosing to shy away from the truth, or directly lying to people to fuel a selfish ambition. And sometimes we may lie because we are afraid.

If you can remember when you were a kid, did you ever do something bad or wrong and your parent(s) found out about it? And instead of fessing up to the crime, you lied or tried to blame something or someone else (a dog-ate-my-homework situation)? Why would you lie to your parents if you knew they already knew the truth? A final act of self-preservation? Attempting to skirt the consequences?

There once was a king who lied – and it cost him his life, his kingdom, and his family.

His name was Saul – a tall, handsome warrior from the tribe of Benjamin. He was chosen and anointed by the prophet Samuel to unify and lead the people at home and in war. God had given him a new heart and he defeated the Ammonites, renewed the kingdom, and continued to fight against the Philistines (1 Samuel 10:9).

But then came a turning point for Saul, when he chose to act out of fear and selfishness rather than trusting in God.

Two years into his reign, Saul summoned 3,000 fighting men to continue to push back against the Philistines at Gilgal (1 Samuel 13).

The catch? The Philistines mustered 3,000 chariots and 6,000 horsemen and troops like the sand on the seashore in a great multitude to fight against Israel.

The Israelites were a bit outnumbered. In fear, they started to scatter and hide.

Seven days in, Samuel the priest – and according to God, the only authorized person to give offerings – was supposed to come, make offerings and seek the favor of the Lord for Saul and his men.

Saul, restless and impatient, offered the burnt and peace offerings to God rather than waiting on Samuel. A big no-no.

As soon as the smoke was wafting in the air above the alter, Samuel showed up and said, “What have you done??”

Saul replied, “When I saw that the troops were deserting me and you didn’t come within the appointed days, I thought: The Philistines will now descend on me at Gilgal, and I haven’t sought the Lord’s favor. So I forced myself to offer the burnt offering.”

Samuel said to Saul, “You have been foolish. You have not kept the command which the Lord your God gave you. It was at this time that the Lord would have permanently established your reign over Israel, but now your reign will not endure.”

Note Saul’s first lie: I forced myself to offer the burnt offerings. Did he force himself to? No. Rather, he was impatient, afraid, and foolish and wasn’t willing to wait on God’s timing. Instead of owning up to his mistake, he phrased it in a way that shows he wasn’t sorry for his behavior as he felt forced to act in that way.

Anyways, after this discussion, the Israelites fled and went to Gibeah. However, at this point, 2,400 troops had already deserted Saul.

Thankfully, in the next chapter, we can read that Jonathan and his armor-bearer bring about an amazing victory by trusting in the Lord.

There was hard fighting on every side all the days of Saul’s reign. Saul continued to fight against all Israel’s enemies and God was willing to give him one more chance to prove that he should be king.

Samuel came to Saul and charged him, “The Lord sent me to anoint you as king over His people Israel. This is what the Lord of hosts says: ‘I witnessed what the Amalekites did to the Israelites when they opposed them along the way as they were coming out of Egypt. Go and attack the Amalekites and destroy everything they have. Do not spare them. Kill men and women, children and infants, oxen and sheep, camels and donkeys.’”

So Saul gathered 210,000 troops to strike down the Amalekites. He was victorious, but then he decided to not follow God’s directions in their entirety.

He captured the king alive instead of killing him as well as sparing the best of the livestock and other plunder.

God saw this and told Samuel, “I regret that I made Saul king, for he has turned away from following me and has not carried out my instructions.” Samuel was angry because he loved Saul and cried out to the Lord all through the night. But in the morning, Samuel knew he had to confront Saul.

When Samuel arrived at Carmel where Saul had put up a monument to himself after the war, Saul said, “May the LORD bless you. I have carried out the Lord’s instructions.”

Samuel replied, “Then what is this sound of sheep and cattle that I hear?”

Saul answered, “The troops brought them from the Amalekites and spared the best sheep and cattle to offer a sacrifice to the LORD your God, but the rest we destroyed.”

“Stop!” exclaimed Samuel. “The Lord anointed you king over Israel and then sent you on a mission and said: ‘Go and completely destroy the sinful Amalekites. Fight against them until you have annihilated them.’ So why didn’t you obey the Lord? Why did you rush on the plunder and do what was evil in the Lord’s sight?”

“But I did obey the Lord!” Saul answered. “I went on the mission the Lord gave me: I brought back Agag, king of Amalek, and I completely destroyed the Amalekites. The troops took sheep and cattle from the plunder—the best of what was set apart for destruction—to sacrifice to the Lord your God at Gilgal.”

Then Samuel said: “Because you have rejected the word of the Lord, He has rejected you as king.”

Saul answered Samuel, “I have sinned. I have transgressed the Lord’s command and your words. Because I was afraid of the people, I obeyed them.  Now, therefore, please forgive my sin and return with me so I can worship the Lord.”

Samuel replied,“I will not return with you,” and turned to leave. Saul grabbed at the hem of his robe, which tore it off. In response, Samuel said, “The Lord has torn the kingship of Israel away from you today and has given it to your neighbor who is better than you.”

It wasn’t like God didn’t give Saul multiple chances to stop lying and repent! If Saul had just been honest with Samuel and repentant, perhaps Saul’s story wouldn’t end with his suicide along with the deaths of his sons and a legacy of madness and destruction.

And this WAS Saul’s second chance! He had already lied and messed up at the battle of Gilgal, you’d think he’d remember what happened last time?

Lies that start as half-truths are still lies . . . and they become larger with heavier consequences until they spiral so out of control that they wreck your entire life.

God longs for us to be honest with him and to obey his commandments. Don’t think you can lie to God and lying to yourself doesn’t do you much good either.

So why did Saul lie? Because he was self-seeking and wanted the people’s praise. Only when Samuel said, “You are rejected as king” did Saul attempt to say he was sorry . . . But he acted out of desperation for his self-interests, not for his relationship with God.

His successor, King David, would also make mistakes. But when he did, he genuinely repented, which is why it is written that David was “a man after God’s own heart.”

Be after God’s own heart. Don’t be like the devil with his lying tongue.

We are all going to make mistakes, but when we do something wrong, we should fess up to our crimes. We should be sincerely sorry . . . Because without repentance, we can’t experience God’s forgiveness.

Copyright © 2021 by Melody Turner @ https://www.mxtv.org/the-honest-truth/. No part of this article may be reproduced or reprinted without permission in writing from Lifeword.org.