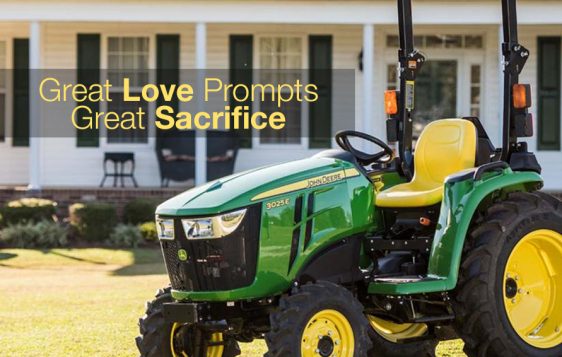 In July of 2008, Mom and Dad had just finished building a new house. It was going to be their last move. Dad had already retired and Mom was just a few years away. The new house was just outside of town with plenty of land for dad to justify buying a tractor.

At the time, Jill and I lived about three hours away from Mom and Dad. We visited their new house while they were still unpacking boxes. I remember it was very hot outside and Jill was very pregnant – about a month away from giving birth. Dad was showing her the new John Deere he had bought and we all smiled as he talked about giving tractor rides to his soon-to-be-born grandson. It was so much fun to see my parents enjoying this new phase of their lives.

The next month, Jill gave birth to our son, Bryce. Both sets of our parents were there to celebrate at the hospital. We had no idea that the next time we would all be together would be in another hospital.

On November 1, Jill, Bryce, and I were involved in a terrible automobile accident. Jill was airlifted to a hospital in Little Rock. Early the next morning, Jill passed away.

Minutes later, while still in the hospital, my parents said, “Scott, we have talked it over and if you would like, we will sell our house and move to help you with Bryce.”

They had spent years waiting for their dream house, yet it only took minutes to let it go.

Many people grow up knowing their parents would do anything for them. I am one of the few that has witnessed it happen. On November 2, 2008, my parents fleshed out their unselfish love toward me.

I wonder if that is what it was like when Christ entered into the world. For centuries God had been communicating His everlasting love for His people through the Law and Prophets (Jeremiah 31:3). But the message of His love became fleshed out in Christ (Hebrews 1:1).

I am still overwhelmed by the great love my parents have for Bryce and me. Their willingness to leave behind their new house in order to move into my house is a reflection of the way Christ poured Himself out on our behalf. Philippians 2:6-8 explains that Christ, “though he was in the form of God, did not count equality with God a thing to be grasped, but emptied himself, by taking the form of a servant, being born in the likeness of men. And being found in human form, he humbled himself by becoming obedient to the point of death, even death on a cross.”

Christ left His home behind in order to enter our world. He exchanged the constant praises of the angels for the ridicule of mankind. His humble sacrifice on our behalf knew no bounds – to the extent that He gave His life on a cross.

But death did not keep Jesus in the grave. Instead, He conquered sin and death on our behalf. Then, he returned to His home in heaven. He wasn’t abandoning us, but instead preparing a place for us.

Jill has joined Christ in that place. One day, my parents and I will too.

Thank you, Mom and Dad, for fleshing out your unselfish love toward Bryce and me.