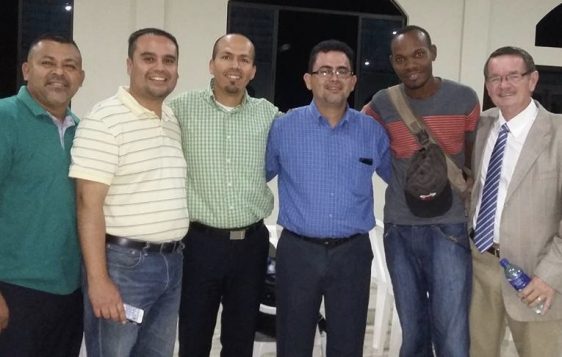 In 1979, fourteen years after Lifeword’s (then Harvest Gleaner Hour’s) first broadcast, the highly anticipated Spanish language was added to the list. Bro Paul Robinson, a missionary to Nicaragua at the time, and Alfonso Quiroz, a pastor in Mexico, were two of the first speakers.

Presently there are two Spanish-speaking broadcasts that have been on air four decades: El Contacto Cristiano (The Christian Contact) is a fifteen-minute broadcast by Ricky Robinson (son of Bro. Paul) that shares sound biblical principles from God’s Word and offers a free discipleship course at the end of each program. Palabra Viva (Life Word) is a one-minute format that specifically targets nonbelievers in a catchy, innovative way to make them aware of their need for Christ.

Countless lives have been changed due to these broadcasts, but probably even more remarkable are the changed lives of people in areas like Cuba where missionaries are not allowed to enter. The airwaves, however, know no boundaries. El Contacto Cristiano can be heard in Cuba, and many have been saved and discipled by way of correspondence without personnel ever having a physical presence on the island. Now the entire Spanish-speaking world can hear these two broadcasts and twelve more on lifeword.org.

Only five languages have been chosen by Lifeword as “starter languages” included in the Lifeword Cloud’s public rollout of the new lifeword.org. Spanish easily made the cut for several reasons, not the least of which is its variety of formats targeting a variety of audiences. The following is a list of the fourteen broadcast formats reaching Hispanics around the world:

The new lifeword.org is up and running, but there are a few kinks to be worked out, of course. If you go to the website, you’ll see five language choices in the upper right hand corner. Click on “Arabic,” for example, and the copy changes to Arabic characters on the right side of the screen…pretty cool! It’s just the beginning of the expansion of Lifeword’s ministry footprint and reaching more of the world with the gospel.

Executive Director Donny Parrish says, “The Lifeword Cloud will completely change how Lifeword reaches the world, pushing ministry out to the over 250 global leaders representing people groups whose languages we can’t speak. Anyone with internet access can find a gospel presentation and more in their heart language at lifeword.org.”