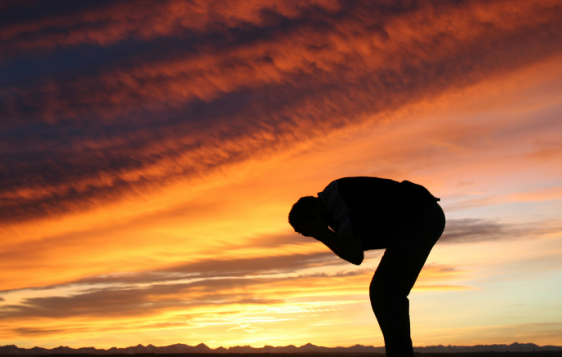 Early last Monday, I took a flight to Dallas, Texas, to visit a dear friend who was in hospice care. I understood realistically that he was in his final days of this life. And I was prepared for that. In fact, I had even rehearsed in my mind the final words that I would say to him before I left to return home.

But I was not prepared to receive a phone call as I was landing in Dallas that It’s too late. My friend passed away, and I was about half an hour away. I was close. I did my very best. But still it was too late.

And the best way that I know to describe that moment was that I felt totally defeated. I understand now that was pretty self-centered thinking. But that was how I felt.

In my state of feeling defeated, over the next few hours I told God exactly how I felt. I held nothing back. I forthrightly expressed my frustration about being so close yet being too late. In fact, I questioned Him as to why He let this play out that way.

Perhaps you are reading this and think I was being disrespectful. Maybe you even question the depth of my faith. After all, God has a reason for everything. So we should just trust Him and shut down our emotions – right?

Well, yes and no.

Certainly, we should trust Him. But maybe that trust sometimes looks a little different than we think.

One of the purest forms of trust comes when we trust God deeply enough to be blatantly honest with Him. Maybe we should trust His love enough to tell Him exactly how we feel. Maybe openly expressing our frustration to Him actually shows our faith in His grace. And doesn’t He already know when our minds are full of unanswered questions? So wouldn’t it be a sign of trust to just come out and directly ask Him those questions anyway?

Being honest with God has always been at the center of our faith. It is only by honestly admitting that we are hopelessly sinful and in need of a Savior that we can find that Savior. So without honesty, nothing else happens and nothing else works – no salvation, no relationship with God. Nothing.

So why would we think that we cannot come to God with the entirety of our emotions – the good, the bad, and the ugly? Why would we not trust Him enough to just be honest with Him regardless of how unattractive our feelings might be at any moment?

Perhaps raw honesty is actually one of the purist examples of trust. It’s not too late.

But let’s get back to emotions for a moment. After all, we all have them. Some are good and some are bad. Some are healthy and some are destructive. Some we can manage and work through on our own. Others can only be controlled with God’s help.

God created us with emotions. They are there for a reason. In fact, people devoid of emotion are an extreme danger to themselves and to society. We were never designed to just shut down our emotions.

Jesus did not do that, and we should not try to do it either.

If you read through the biographies of Jesus referred to as the books of Matthew, Mark, Luke, and John, you find the humanity of Jesus demonstrated in real human emotions. In fact, I encourage you to read through those four books and specifically see if you can spot examples of Jesus’ emotions. I’ll give you a hint at four:

There are those who resist the idea that Jesus ever got angry. But kicking over a few tables in the temple seems a bit angry to me. Apparently there were religious leaders selling sacrifices at a profit in the temple and making it harder for the poor to come to God. So that made Jesus angry. And He removed their tables rather abruptly. So it seems that injustice and putting up barriers between people and God made Him angry. And I don’t think that has changed.

People also resist the notion that Jesus got frustrated, but to me, some of His responses to the disciples indicate otherwise. And that frustration further demonstrates the humanity of Jesus, which is what  assures us He understands our every emotion. In His frustration, however, we never find an absence of love, grace, or mercy toward those disciples. Neither will we ever find an absence of those three things toward us, regardless of how frustrating we must be.

We find several examples of Jesus’ sadness in those biographies. One of the most notable is found in the shortest verse of the Bible where it says, “Jesus wept.” (John 11:35). Note that it doesn’t say that Jesus cried. It says He wept! Think about that for a moment. Jesus knew that Lazarus would be resurrected, yet He still wept at the death. Why would I expect to be any different?

Among the last words of Jesus on the cross was the question, “My God, my God, why have you abandoned me?” (Matthew 27:46). Certainly Jesus knew that He was not abandoned. But in His humanity, He felt abandoned. Likewise, there may be times in our lives when we feel God has abandoned us. We should find comfort that Jesus has shown us that there is no shame in those emotions. And we should follow the model of Jesus in honestly and directly expressing those feelings to the Father. Even to the point of questioning why.

I think it’s safe to say that at some point each of us will have a moment or season of life like I had last week. A time where we feel totally defeated. In those times, it is important for us to remember that there is no shame, guilt, or condemnation in those emotions.

But there is hope and help if we take those emotions to God honestly – no polish or spin involved. Just trust Him enough to be brutally honest about how we feel.