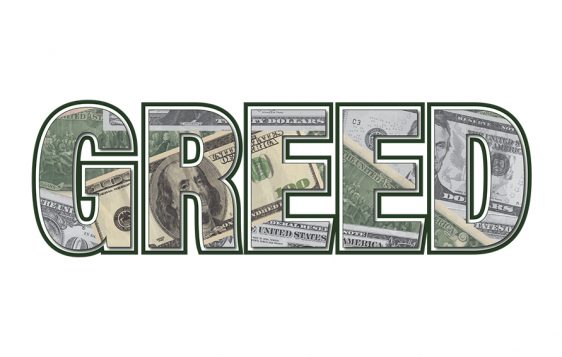 Ask your pastor how many people he has counseled about their struggle with greed. I would guess that number would be much closer to “zero” than it would be to a big number like “three.” Have you had a heart-to-heart with a friend about how much you need to break the stronghold of greed in your life?

In my opinion, I doubt many of us would know how to answer that question even if we were being completely honest with ourselves.

When it comes to the question “Am I greedy?” most responses would probably be something the lines of, “Uh . . . I don’t think so. Maybe?” It’s very clear to me that I have real struggles with lust, laziness and gluttony. I don’t seem to have much of an inclination toward drunkenness or unforgiveness. But greed? Who knows?

We lack clarity both in definition of what greed is and how to recognize it. It seems to me that according to Jesus in Luke 12, there are two major components to the sin of greed:

#2 – A lack of generosity, which naturally follows #1

When it comes to recognizing greed in your own life, Jesus knows it’s tricky thing. He spoke about greed in a unique way:

“Then He said to them, “Beware, and be on your guard against every form of greed; for not even when one has an abundance does his life consist of his possessions… For where your treasure is, there your heart will be also.” (Luke 12:15, 34)

Regarding other sins, Jesus spoke much more matter-of-factly about what was right and what was wrong. But this language of “beware” or “Watch out!” as some translations put it, is unique to how Jesus spoke about greed.

This is because it is easy to be habitually greedy and not realize it.

But why is greed so hard to recognize? I think the answer can be summed-up in one word: comparison.

We think greed is a problem only “rich” people suffer. And, as long as someone else is richer than we are, we can’t be greedy . .  . but we definitely can! When it comes to generosity and giving, we believe that as long as someone else has a more luxurious lifestyle than ours, then they can affordto be generous. We’re just trying to make it, right?

The problem is that according to Jesus, our ability to “make it” in this world and our inclinations to be generous have absolutely nothing to do with what we can or cannot afford but everything to do with the Father’s ability and desire to be our source of satisfaction and provision.

“And He said to His disciples, ‘For this reason I say to you, do not worry about your life, as to what you will eat; nor for your body, as to what you will put on. For life is more than food, and the body more than clothing. Consider the ravens, for they neither sow nor reap; they have no storeroom nor barn, and yet God feeds them; how much more valuable you are than the birds! And which of you by worrying can add a single hour to his lifespan? If then you cannot do even a very little thing, why do you worry about other matters? Consider the lilies, how they grow: they neither toil nor spin; but I tell you, not even Solomon in all his glory clothed himself like one of these. But if God so clothes the grass in the field, which is alive today and tomorrow is thrown into the furnace, how much more will he clothe you? You men of little faith! And do not seek what you will eat and what you will drink, and do not keep worrying. For all these things the nations of the world eagerly seek; but your Father knows that you need these things. But seek his kingdom, and these things will be added to you. Do not be afraid, little flock, for your Father has chosen gladly to give you the kingdom. Sell your possessions and give to charity; make yourselves money belts which do not wear out, an unfailing treasure in heaven, where no thief comes near nor moth destroys.’” (Luke 12:22-33)

Greed is inextricably linked to a lack of faith that God is actively involved in your livelihood or well-being. Think about it. If you are unwilling to give in a way that creates some kind of financial uncertainty in your life — in other words, you will not give to the point where there is any real risk — then you cannot say that you have ever “trusted God to provide” or that you have ever given sacrificially. What room for faith is there?

Moreover, if we are being completely honest, the context of our American lives cannot be ignored either. Very few, possibly none, who are reading this are destitute.

As Americans, we tend to have no idea how little we really need. The truth is that our ego is wrapped up in our possessions and we feel entitled to whatever we want. Of course God gives us good things to enjoy, the question is, “Would you give them up if God wanted you to?”

Actually, maybe the real question is, “Have you even considered that God might ask you to give up your material possessions, or do you think that you have earned them and therefore have a right to them that not even God can take away?”

Allow me to offer a few test questions that can give you an indication as to whether or not you have greed in your life:

1. Have you ever felt convicted by the Holy Spirit to give to someone in need, but then didn’t and justified it by saying, “That person should be more responsible/get a job/get on a government program,” or “What if they are just ripping me off?” or “I can’t afford to help them right now”?

For the sake of argument, let’s say that the person asking you for help is, in fact, being dishonest or is going to be irresponsible with what you give them. What have you lost? The correct answer is ultimately, nothing.

The money you gave came from God, and if you actually need it, he promises to take care of you. You have lost nothing. That money is going to burn up someday anyway. If you have given from a compassionate heart, you will have gained treasure in heaven. Do you really believe that “treasure in heaven” is better than treasure on earth?

I have battled these ideas recently. A friend who was in need but who also has terrible money management skills asked me for help to the tune of several hundred dollars. I didn’t want to do it. But I knew God wanted me to. After looking for multiple ways out of it and being really frustrated at the fact that the money I had just gained by selling a camera — money I had plans for — was going bye-bye, I went ahead and gave it.

With a clear conscience and absolute truth in my heart, I am telling you that not only have I not missed that money, but God has surprised me with financial blessings that I did not foresee and has softened the heart of my friend who, not long ago, was a strident atheist but now is willing to talk about his need for God.

2. Are you giving your “first fruits?”

It was around before Old Testament law was given and goes on into the New Testament. It is the first 10% of your increase and is meant to be brought to the house of God for the purpose of provision.

Once again, it is meant to be the first of your increase. It’s not leftovers, it’s not, “Well, I’ll see if I have enough after the bills are paid.”

Plan on giving it before you plan your lifestyle. If your bills are such that you literally cannot spare the money, change your lifestyle. I bet there is something you can do. Can you downgrade what kind of vehicle(s) you have? Smaller house? Eat out less?

If there is really nothing you can do, bring your tithe (you can’t “give” something that doesn’t belong to you in the first place) anyway and put God to the test to see if he won’t provide for you. I mean it.

People get really worked up over tithing, and I understand that it takes the Holy Spirit to sanctify, but if there is one thing I know, it is this:

The only people who hate the idea of the tithe are people who won’t step out in faith and do it. I’ve never met a remorseful tither.

3. Lastly, do you always have an opinion about how much (other than tithing because that is God’s command, not mine) other people ought to be giving or what they should do with their money? Do you see “rich” people and think to yourself that if they cared about the poor, they would give a lot more. Or do you see someone in a nicer vehicle than yours and pass judgment on them?

First of all, this attitude might stem from covetousness (jealousy).

Thirdly, you’re not the first person to have these thoughts. A very famous man said that an extravagant gift ought to be sold and the proceeds given to the poor.

His name was Judas Iscariot. And he didn’t really care about the poor. Do not accuse others of not being generous enough because you “care about the poor” unless you’re willing to sell all you have and give it to them.