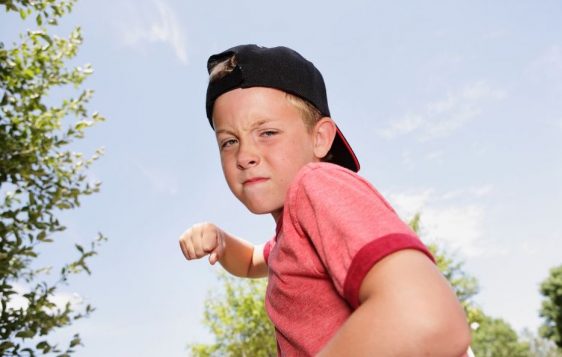 The biggest bully in school stands before you. Threatening words spewing out of his mouth. He’s gonna pulverize you, pound you to the ground, make mud out of you… you know, all the good stuff. And there you are. This little guy. Spaghetti arms, little chicken legs, and beads of sweat forming on your forehead as he squints his beady little eyes at you.

The crowd around you chants louder and louder, “fight, fight, fight” but they seem to be drowned out by the sound of your heartbeat saying “lub-dub, lub-dub, lub-dub”. Faster and faster, and now your stomach is churning. The battle is before you.

Worry. Doubt. Fear. All of your worst enemies are the ones showing up right now. This guy is gonna cream you.

But then, with the sunlight starting to set over the hill in the distance, you see a shape, a form, it’s hard to make it out and you aren’t quite sure if it’s someone coming to rescue you or another team member for ‘ol Jerry here.

And then you realize just who it is.

The bully’s words bring you back to the present as he spits out threats and warnings and finally, you have the courage to respond.

Shock sparks in his eyes for a brief second before the anger returns and his brow furrows.

And then, just as if it was completely planned, your friend tops the hill and coming behind him looks like a herd of water Buffalo stampeding across the plains of Africa.

You are ready for this fight. You know who goes before you, and now you remember who stands beside you! ‘Ol Jerry doesn’t even realize what’s coming.

As we close out chapter 5 of our text in Joshua, we see the Israelites camped at Gilgal. They’ve crossed the Jordan river and observed the Passover, the next thing is to follow their fearless leader into battle and conquer the land.

The only problem is, their leader isn’t fearless.

Just how much time has passed since they crossed the river? Why hasn’t Joshua forged through to defeat the enemy ahead?

Joshua was one of the 12 spies sent into Canaan years ago. He knew what the people looked like. He remembered they were like giants! Can you imagine? Just stop and put yourself in his shoes. You’re brave. You know the Lord is for you, yet when you come to that very moment where the battle will begin, wouldn’t a little fear creep in? How many times has the Lord encouraged Joshua with “Do not fear. Be of good courage”?

So, as he’s there, facing the battle before him, a man appears with his sword drawn.

“When Joshua was by Jericho, that he lifted up his eyes and looked, and, behold, there stood a man over against him with his sword drawn in his hand: and Joshua went unto him, and said unto him, Art thou for us, or for our adversaries?”

Here it is. The war is about to begin. One man stands between Joshua and Jericho. Friend or Foe?

“And he said, Nay; but as captain of the host of the LORD am I now come. And Joshua fell on his face to the earth, and did worship, and said unto him, What saith my lord unto his servant? And the captain of the LORD’S host said unto Joshua, Loose thy shoe from off thy foot; for the place whereon thou standest is holy. And Joshua did so.” (Joshua 5:14-15)

Who is this captain of the host of the LORD?

A couple things lead us to our conclusion.

1. He is the captain, the very leader of the Lord’s army.

2. Joshua falls down and worships Him and is not forbidden to.

3. Where He is standing is now holy ground.

This is what’s called a Theophany. This is Jesus Christ Himself!

Jesus told Peter that if he wanted, he could call down legions of angels to fight for him, but it wasn’t the time.

Joshua is reminded who goes before Him, and who stands beside. It’s the God of Angel armies! It is Jesus!

Do you need that reminder today? When the bullies of this world are in your face, demanding to know what army will stand with you, you tell them, the LORD of Hosts!