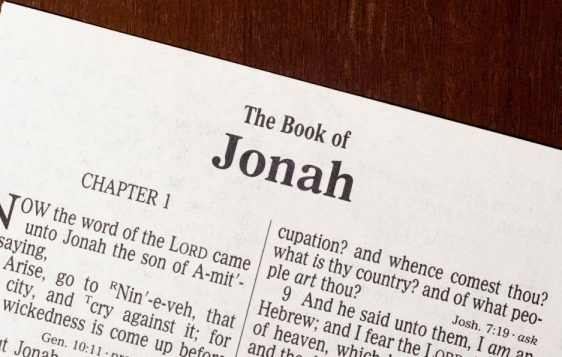 (The following is a family devotional guide with suggested questions and scripture.)

Focus Scripture: Now the word of the Lord came to Jonah the second time, saying, “Arise, go to Nineveh, the great city, and proclaim to it the proclamation which I am going to tell you.” So Jonah got up and went to Nineveh according to the word of the Lord. Now Nineveh was an exceedingly large city, a three days’ walk. Then Jonah began to go through the city one day’s walk; and he cried out and said, “Forty more days, and Nineveh will be overthrown.” Then the people of Nineveh believed in God; and thy called a fast and put on sackcloth, from the greatest to the least of them. When the word reached the king of Nineveh, he got up from his throne, remove his robe from himself, covered himself with sackcloth, and sat on the dust. And he issued a proclamation, and it said, “In Nineveh by the decree of the king and his nobles: No person, animal, herd, or flock is to taste anything. They are not to eat, or drink water. But every person and animal must be covered with sackcloth; and people are to call on God vehemently and they are to turn, each one from his evil way, and from the violence which is in their hands. Who knows, God may turn and relent, and turn from His burning anger so that we will not perish.” When God saw their deeds, that they turned from their evil way, then God relented of the disaster which He had declared He would bring on them. So He did not do it. But it greatly displeased Jonah, and he became angry. Then he prayed to the Lord and said, “Please Lord, was this not what I said when I was still in my own country? Therefore in anticipation of this I fled to Tarshish, since I knew that You are a gracious and compassionate God, slow to anger and abundant in mercy, and One who relents of disaster. So now, Lord, please take my life from me, for death is better to me than life.” But the Lord said, “Do you have a good reason to be angry?” Then Jonah left the city and sat down east of it. There he made a shelter for himself and sat under it in the shade, until he could see what would happen in the city. So the Lord God designated a plant, and it grew up over Jonah to be a shade over his head, to relieve him of his discomfort. And Jonah was overjoyed about the plant. But God designated a worm when dawn came the next day, and it attacked the plant and it withered. And when the sun came up God designated a scorching east wind, and the sun beat down on Jonah’s head so that he became faint, and he begged with all his soul to die, saying, “Death is better to me than life!” But God said to Jonah, “Do you have a good reason to be angry about the plant?” And he said, “I have a good reason to be angry, even to the point of death!” Then the Lord said, “You had compassion on the plant, for which you did not work and which you did not cause to grow, which came up overnight and perished overnight. Should I not also have compassion on Nineveh, the great city in which there are more than 120,000 people, who do not know the difference between their right hand and their left, as well as many animals?” -Jonah 3-4

In Jonah 3:1-10, Jonah is about to get a do over in life. You see, God told Jonah to preach to the wicked city far, far away but Jonah was not feeling it. In fact, he hopped on a ship in the opposite direction…and that’s when God busted him in a big way. He sent a storm and a big fish to get his attention. After praying a passionate prayer in the belly of a fish, God gave him a redo. That big fish spit Jonah up on land – now, it was time to go preach to Nineveh (AKA: wicked city). With over 120,000 people in it, it was a huge place to walk and preach; in fact, it would take him three days to cover the whole city! Something miraculous happened on Day #1: Jonah preached a message of destruction to the city, and the people believed him! The men of Nineveh proclaimed a fast, hoping that God would relent from this disaster – the king fasted as well! He even put out an official message telling everyone to fast and ask for forgiveness because “Who knows? God may turn and relent…” And, the really cool part of this story is this: God relented! God saw their hearts that they were truly sorry for their actions, and he forgave them.

Now, you might think Jonah would be happy about this, right? Nope! in Jonah 4:1-10, we see Jonah angry and bitter that God was “a gracious and compassionate God, slow to anger and abounding in love”, forgiving the repentant Ninevites. Maybe this is why Jonah ran in the first place. Perhaps he didn’t want to see God have mercy upon these people (who had killed fellow Israelites, possibly killing members of his family). God questions him twice and even uses an object lesson with a plant to show him his faulty thinking. Unfortunately, the narrative doesn’t end happily…it ends with an angry, bitter Jonah.

What are some things that are hard to forgive? Is there anything God won’t forgive?

What’s the difference between anger and bitterness? What makes you angry?

When have you prayed for something and it wasn’t answered the way you wanted?

Would you rather see the guilty get punished for their crimes or the guilty escape punishment but learn their lesson? Did the Ninevites deserve punishment? Yes. But, God would rather see a change of heart from a wicked than to destroy them. Without Jonah knowing, he had set Jonah up for the win by sending two devastating plagues, killing thousands, to the Ninevites within 6 years. After that, a total eclipse of the sun. These events humbled the Ninevites in such a way that they were ready to hear an Israelite’s message…and receive it. Jonah was set up for the win all along and had no idea. All because our God is a compassionate God who wants us to follow Him, not because we “have to” but because we want to. He’s always after our hearts! He is a God who will forgive anyone for anything when they approach Him with a repentant heart. He is kind and patient, full of grace and mercy. The real hero of this story is not Jonah, but God. He used an imperfect man to save an imperfect nation who lived imperfect lives to point them to a perfect God.

Can you look back on your life and see how God may have allowed some things to happen to try to change your heart and mind?

Have you ever thrown a temper tantrum? How did that go?