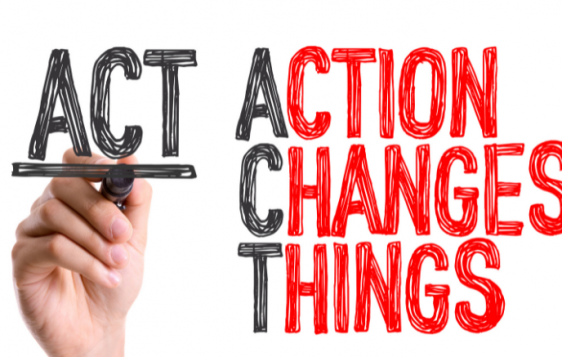 Over the last twenty years, I have read and listened to a lot about the terrorist attacks against our country on 9/11/2001. I have tried to imagine how those in leadership roles in our government must have felt that day.

To me, the person of most interest was President George W. Bush. I have been intrigued as I have read and listened to firsthand accounts from him about his thoughts and actions on 9/11.

While I will never be faced with the burden the President faced, I too have experienced the cascading effect of multiple messages. And I have come to believe that when God delivers a succession of related messages to me in a short period of time, I probably should take notice.

So maybe right about now you’re wondering how I came to this conclusion. And maybe you’re even wondering what my credentials are to share this message with you.

Well first of all, I don’t really have any credentials. I mean I’m not a pastor or preacher, and I don’t work with youth in any way. In fact, I’m just a retired guy that loves Jesus and loves people and wants to see the two connected.

But I have learned to be observant to what God is doing. And I have learned that joining Him in whatever He is doing beats anything that I could come up with on my own. I don’t need to be super creative or develop killer ideas. I just need to partner with God whenever He reveals an opportunity to me.

So back to how I came to the conclusion that we are seeing a genuine widespread movement of God among our youth right now. It was the cascading effect of multiple messages. Messages so powerful to me that they made me change my plans for the evening and sit down and share them with you.

It all began several weeks ago, when I began to hear rumblings of some amazing things happening among the youth group of our local church. The youth pastor seemed really excited. In fact, he seemed to be in awe of what was happening. Something really special was going on, but I wasn’t sure exactly what.

Then last week it all became very clear when a multitude of young people came forward with testimony of their acceptance of Christ into their lives. And they demonstrated that faith publicly in baptism. At that moment, it seemed evident to me that we were experiencing a movement of God among the youth of our church. So we celebrated that.

Then later that afternoon, I saw a message on social media from an acquaintance in another state about the acceptance of Christ by her grandson followed by public acknowledgement of that faith through baptism.

So with two separate unrelated experiences in such a short time, I began to take notice. But certainly, I was not ready to call this a movement.

Then within a few days came a similar message from friends of ours in a different state. And now today, similar messages from two other friends in two other states. So that is five instances across multiple states and multiple denominations of God working among our young people in the last seven days. And this is just among my community of friends and acquaintances.

This is not ordinary. This cannot be simple coincidence. This is ample evidence to me that God is working among this age group in a very powerful and widespread way right now. The cascading messages are clear.

So the question becomes,  “Are we taking notice? And are we taking action? Are we really paying attention to what God is doing and are we joining Him in what He is doing?

At this point I’m inclined to give you a list of specific things you can do to join God in this work among our youth. But if this really is a genuine widespread movement of God, that list should come directly from Him and not from me. So I will only give you two suggested actions to take:

1. Earnestly ask God what He has for you personally and your church collectively (if you have one) to do in partnership with Him in this movement.

2. Then do what He brings to your mind.

A movement of God among our youth can change lives not only right now but eternally. And it can change our churches, our communities, and our world.

And a movement of God can change your life too, regardless of age.

So, young person, maybe you too should join the movement!

And let’s not show favoritism to a certain age group . . . join this radical, earthshaking surrender to the God of the universe.