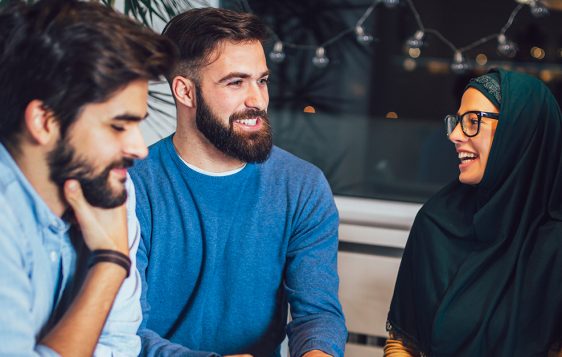 Joe Costa left technology to become a champion for youth

Osta became Costa when half his family moved to the U.S. His dad’s cousins are the Costantines(sometimes spelled Constantine). The Ostas are originally from Maghdoucheh (مغدوشة) near Sidon, Lebanon. (The biblical reference: Mary waited in Maghdoucheh for her son Jesus as he preached in nearby Sidon.)

Tolerance and diversity is in their fabric

His parents lived in Corniche ElMazraa before moving to the Metn area. His mother grew up on Hamra street in Ras Beirut in the building that Ghassan Tueni bought at the time for AnHar newspaper. That section of the city was a mosaic of religiously diverse neighborhoods. Joe inherited the spirit of openness from his parents.

While growing up in a predominantly Christian area, he spent his first 17 years shuttling between Metn, where home and his evangelical school  were, and Ras Beirut, where dad was a pastor of his congregation.

Spending time playing, doing activities, and reading the Bible with other neighborhood kids at church made him who he is today. Growing up, he had friends from different religious or socioeconomic backgrounds. Until he was nine years old, he did not know who was Christian and who was Muslim. Ahmad and Charbel were just his friends’ names.

At 18, he and his parents moved back to Ras Beirut, which ended the Metn era for him. He feels very much a Ras Beiruti and a Hamra native.

Searching for meaning, aligning with God, and future wife

He attended the Lebanese American University in Ras Beirut for his bachelors in computer science. He worked there in the IT department for seven years and managed to obtain an MBA as well. During that time, he began dating Mira, his wife-to-be, and continued searching for his purpose in life.

He wanted to be successful at both. As they were dating, they asked all the deep questions, maybe earlier than they should have, he reflects.

They agreed on the important issues, and they made sure that each other’s deeper plans were aligned. It became obvious that he was supposed to leave the business world and focus on his mission to serve God and others. It would impact his income and they would have to make sacrifices.

Her big plan, on the other hand, was to go to the States and study healthcare management. So after about a year of dating she left, and their long-distance relationship for two years was a good test for their growing relationship.

“God’s providence prevails,” he says. The university she attended in Philadelphia was 40 minutes away from his uncle’s family, and they invited Mira to move into their extra bedroom when she began having roommate problems. Mira enjoyed living with the Costa family, and she became a catalyst for the Costa cousins to get to know each other even better.

During those two years, Mira and Joe saw each other as they traveled between the U.S. and Lebanon. In Aug 2016, three and half years after they met, they were married.

He thought hard and prayed a lot to find his calling. His heart was set on serving young people in their 20s. His mission is to talk with them, invest in them, and encourage them. “I want to serve young Arabs,” Joe said. “Especially the ones in Lebanon.”

During their first year as husband and wife, they took off to the U.S. for Joe to study and raise funds for his ministry.

During their time in the States, Mira worked for a year as a business analyst in healthcare management. Her employer was so satisfied with her work that they extended a work-from-home-in-Lebanon offer (way before Covid-19). She accepted.

Reflecting on how God worked in his life, Joe deeply believes that whenever a door was difficult to open or closed shut, it was God’s intervention. He believes that God has always pointed him in the direction of the mission for a greater cause.

Reminiscing living in the US

They returned to Lebanon in Sept 2017, but Joe misses the States as he and Mira enjoyed living there. He explains that it’s little details that make the difference between Lebanon and America: uninterrupted power, doing business online, going to concerts and festivals, and not having to run around to do official paperwork. They found a balance between American friends and culture and Arab and Lebanese friends who enjoyed what they enjoyed. That balance made it even more difficult to leave.

He loves to barbeque ribs (who doesn’t), hang out with friends and watch the Super Bowl, enjoy the American way, and yet he still misses a good plate of hummus.

“My mission is to serve here [Lebanon]. So I think that’s what made the United States blues a little more tolerable.”

He’s been working with youth since he was 17. At 32, he’s now fully immersed in it with more experience under his belt. Sometimes young people are blamed for being on the sidelines and not taking initiative. Others think that adults contribute to marginalizing youth. We might tell them to “keep quiet as the adults are speaking,” or we suggest that “their ideas don’t matter as much.”

Joe says, “Young people need attention and are full of energy. If you don’t listen and channel their energy for the right things, they will use it for other purposes.”

“We shouldn’t blame a teenager if he spends 14 hours straight on Fortnite if we don’t help him fill that time with something worthwhile. Young people have amazing ideas, are future-looking, yet still lack maturity and experience. What they see and feel is genuine. If you listen to them, you’ll observe, learn, and discover.

“For example, a young person who PlayStations all day is also a poet. A person who snowboards, hikes, and does extreme sports can also enjoy a cool game of backgammon. They have experience in areas in which adults can barely keep up with, if any. By listening, we learn. We need to invest in them. We help them grow, understand life, and find their purpose. They can make their worlds and ours a much better place.”

Aside from enjoying a good rack of baby back ribs, he enjoys basketball and analyzing stats. He’s a big fan of the Philadelphia 76ers. He also enjoys theater. Just like (the Broadway show) Tina, his dream was to act on Broadway. He can sing in tune but doesn’t claim to have an angelic voice. He likes the stage. It’s genuine and plays live.

“I would love to act in plays,” Joe says. “The ones that fit my values. Kinky Boots won’t work. Jesus Christ Superstar might. Drama, monologues, dialogues, I would love that.”

At 32, he’s full of energy, focused, aligned with God and wife, serves youth, and helps them build a better future for all of us.

[During the COVID-19 lockdown Joe spends time with ShiBiFeed producing videos and connecting with youth and conducts online regular youth meetings and one-on-one coaching. Shoutout to Ziad, a Starbucks buddy of his, and to the Min Albi for helping them get food boxes to 145 families.]

Copyright © 2020 Lifeword.org. All rights reserved. No part of this article may be reproduced or reprinted without permission in writing from Lifeword.org.