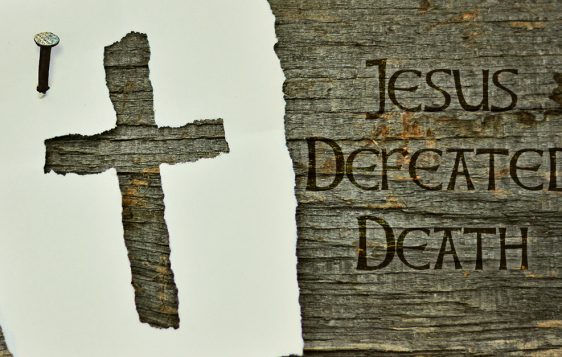 At the stores, Easter appears to be the celebration of a big, fluffy bunny that leaves behind eggs filled with sweets.

But Christians market Easter differently. It is the day we celebrate the Resurrection of Jesus from the dead, one of the most important pa of Christianity.

If Jesus didn’t rise from the dead, Christianity itself would be a lie. There would be no hope for the afterlife because Jesus was the first to rise (1 Corinthians 15:20), and baptism symbolizes dying with him and being resurrected like he was (Romans 6:4).

If Jesus hadn’t risen from the dead, he was either a lunatic or a liar and his disciples were, at best, deceived. At worst, co-conspirators. But a conspiracy for what? None of them ended up with money or power.

If Jesus hadn’t risen from the dead, Christians can’t say they know the only way, truth and life in this universe chock-full of many potentially believable realities.

If Jesus hadn’t risen from the dead, Christians are to be pitied more than any people group in the world (1 Corinthians 15:19).

So I am here to tell you Jesus DID leave the grave and there is solid evidence for this conclusion. Easter is not a lie; it is the most joyous holiday of the year because it symbolizes the sacrifice God made to save mankind.

The resurrection of Christ is no fairytale; it is a historical fact for four main reasons:

1. Jesus was killed by crucifixion at the hands of the Romans.

Critics have suggested that Jesus survived his crucifixion and the disciples nursed him back to health. However, the Romans knew how to kill people too well for them to let anyone survive a public execution such as a crucifixion.

First, Jesus had been beaten with a cat-o-nine tails before he was ever put on the cross, which means he would have already been in critical condition and suffered massive blood loss. It’s the reason the Romans found someone to help Jesus carry his cross to Golgotha. According to Alexander Metherell M.D. Ph. D, “There was no doubt that Jesus was already in serious to critical condition before the nails were driven in.”

Second, the nature of a crucifixion is brutal and on many “worst possible ways to die” lists. In short, Jesus suffocated to death.

For every breath he took he had to lift himself up with his feet that were painfully nailed down, scrape his bleeding back against the wood, and then sag back down until he literally was too exhausted to attempt breathing.

Third, the Romans were professional killers.

If a prisoner escaped alive, they themselves would be the ones executed. When Roman soldiers thrust the spear into the side of Jesus Christ as seen in Luke’s gospel, blood and water came out which, according to modern medicine, aligns with death by asphyxiation. According to modern medical knowledge (specifically, the journal of the medical association), Jesus was dead, not even “mostly dead.” And he was dead for three days.

There would have been no possible way for the disciples to have nursed him back to health because the Romans didn’t have to break Jesus’s legs, meaning he was dead before they took him down from the cross.

2. Jesus was buried in a well-known tomb that was sealed and guarded by Roman soldiers and three days later, the tomb was empty, and the guards had fled.

Joseph of Arimathea was a well-known and wealthy Pharisee who was also a member of the Sanhedrin (the council that oversaw the trial and conviction of Jesus). He asked for the body of Jesus and buried him in his own tomb. It wasn’t like Jesus was dumped in a mass grave where criminals normally went. Jesus was buried like a rich man would be as was prophesied (Isaiah 53:9).

So, it’s not like no one knew where he was at making his disappearance from the tomb undeniable.

Furthermore, even though the Jews paid the guards to say the disciples had stolen the body, those men were scaredy-cats in hiding after fleeing from Gethsemane the night Jesus was arrested. And it is no ordinary task to take out two Roman guards, break a seal and open a tomb. The Jews thought the body was “safe” and they made sure no ordinary person could steal the body of Jesus! And no ordinary person did.

The story of the empty tomb is unanimous in all of the Gospels and they are not fictionalized. Also, the women were reported seeing the empty tomb and Jesus first.

If the disciples were trying to come up with a good lie, they would have said they had seen Jesus first.

In that day, a woman didn’t even count as an eyewitness in a court of law. So why would the disciples say that women had told them about the empty tomb and had seen the risen Lord?

It was the truth.

3. Jesus was seen by more than 500 people after his resurrection.

Unless hundreds of people shared the same dream or a mass hypnosis, more than 500 people witnessed him walking around after his death. (If you have more questions, watch the movie The Case for Christ.)

Jesus appeared to Mary Magdalene, his mother Mary, the two disciples on the road to Emmaus, to all of the apostles and to all of his disciples before his ascension.

Perhaps his resurrection could be disputed if Jesus had only shown himself to a few people, but how do you explain 500 eyewitnesses with the same story? You can’t.

Then there were the eleven remaining disciples with whom Jesus spent the most time during his life and ministry. They were all radically transformed:  They became bold. They told the story over and over while running for their lives. Ten of them became martyrs and one, John, died in exile.

Would you die for a lie? A lie you knew was a lie? If the disciples knew Jesus hadn’t risen from the dead . . . why were they willing to die for him?

4. Jesus’s resurrection is validated by these three external sources and many more.

~ A modern philosopher, Antony Flew, admitted the tomb was empty in a debate against Gary Habermas. That’s quite a concession, my friends, especially for someone who was an atheist. (He changed and wrote a book about it in 2007.)

~ Flavius Josephus was a first century Jewish historian who recorded this in the tenth century:

“At this time there was a wise man who was called Jesus. And his conduct was good, and [he] was known to be virtuous. And many people from among the Jews and the other nations became his disciples. Pilate condemned him to be crucified and to die. And those who had become his disciples did not abandon his discipleship. They reported that he had appeared to them three days after his crucifixion and that he was alive. Accordingly, he was perhaps the Messiah concerning whom the prophets have recounted wonders.”

Josephus a Jew who was never converted to Christianity, reported that a man named Jesus lived, died and came back to life three days later.

~ A Roman historian and senator named Publius Tacitus affirmed Jesus’s existence and crucifixion, the “superstition” that had been spread all over Judea and even Rome by Nero’s reign. He wrote:

“Christus, from whom the name had its origin, suffered the extreme penalty during the reign of Tiberius at the hands of one of our procurators, Pontius Pilatus, and a most mischievous superstition, thus checked for the moment, again broke out not only in Judaea, the first source of the evil, but even in Rome.”

I’m here to tell you this “superstition” is true and historical fact. I’m more than confident that Jesus lived, died, and rose again, which showed both his deity and his humanity.

If you still have doubts, do the research. Start with two men who tried to prove that Christianity was a lie . . . and came face-to-face with the truth: C. S. Lewis and Lee Strobel.

Jesus is the Savior of the world.