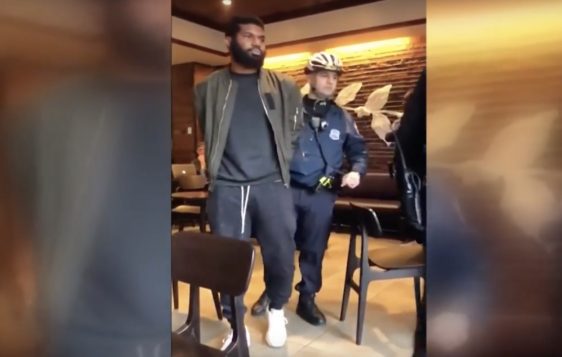 Last year two black men were arrested in a Philadelphia Starbucks after the white manager contacted police. When a video of the arrests went viral, Starbucks reacted immediately and decisively.

The manager was fired, and for one Tuesday in May, thousands of Starbucks stores around the country were closed as employees underwent mandatory racial bias training.

Since then, questions have been raised. Was the manager actually being racist? Did the men really deserve to be arrested? While an impartial look at the situation suggests that there was no racial bias involved in the actions of the manager or the police officers, the fact that Starbucks’ first reaction was racial bias training reveals the state of our country’s mindset on this crucial issue:

A hot-button topic at any time, it seems to be resurfacing in the United States at an alarming rate. Some would say that the worst is over, that since slavery and segregation have ended, the issue has been mostly dealt with.

But clearly that is not the case.

Sixty-four percent of Americans believe that racism is still a problem in our world today. Being accused of racism, whether or not it’s true, is a political and professional death sentence.

Elected officials, celebrities, political candidates, CEOs and superstar athletes are constantly bombarded with accusations of racism. Whether it’s white-on-black, black-on-white, or any other combination of racial conflicts, this is an issue that is still prevalent, and it seems to be reaching critical mass.

But this issue is not one that is exclusive to the United States, nor is it exclusive to this present time. Race has always affected how people see others, and this includes the days of Jesus Christ.

In those days, Samaritans were the targets of racial hatred. Half Jewish, half Gentile, Jews considered them unclean and unfit for social interaction, so they went out of their way to avoid any contact.

Jesus, a Jew himself, would’ve been expected to act similarly. But one day, as he and his disciples went from town to town, they were forced to travel through Samaria. The Bible tells us this story in John 4:4-42.

As he entered the town, his disciples went on ahead to buy food at the market. Jesus decided to rest by a well, and while he was there a Samaritan woman came to draw water. He surprised her by striking up a conversation.

Offering her living water, Jesus told her she would never be thirsty again if she drank it. The woman didn’t understand, but Jesus was actually talking about salvation. He told her to call her husband to come meet with him. The woman was embarrassed and made an excuse that she had no husband. Jesus, of course, knew the truth–she had been married five times and was currently living with a man to whom she was not married.

When Jesus told her this, she realized he must be a prophet. They began to discuss the differences between Samaritan and Jewish religions, for she knew that Jews believed in the coming of the Messiah.

After this, the woman rushed back into town and gathered everyone she could to bring them to Jesus. Meanwhile, the disciples had returned and were shocked to learn that Jesus had been speaking to this woman of questionable character. They did not mention his actions and, instead, urged Jesus to eat. But he replied that he was fed by doing the will of God.

When the woman returned with a crowd of people, Jesus preached to them. They were so impressed by what he said that they asked him to stay two more days and continue to teach them. Many became believers.

Jesus loved people of all races even if his culture told him they were lesser or outsiders.

He didn’t treat this woman differently because of her skin color or where she lived.

He loved her just as he loved any Jew he met.

First Corinthians 12:13 says, “For we were all baptized by one Spirit so as to form one body–whether Jews or Gentiles, slave or free–and we were all given the one Spirit to drink.”

Racism is never acceptable. Jesus loved all races equally, and he saves us and adds us to his family no matter who we are. If we believe in him, we are his, no matter our race. Following Jesus means there is no room for racism in our lives. We cannot truly follow Jesus and still mistreat others due to race. The key to defeating racism, just like any other sin, is the love of Jesus.