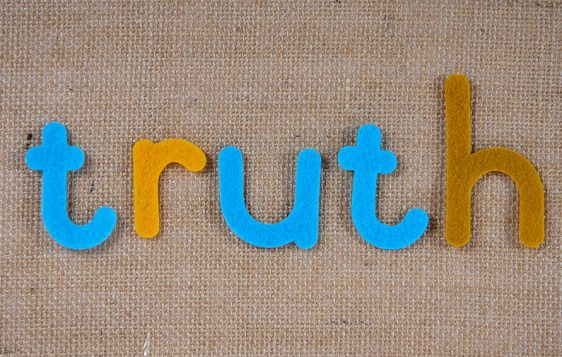 Truth. It’s a subject that has evolved and changed.  A topic that has been stretched, questioned and misused over time. We now call it “moral relativism,” that shifting concept that truth is whatever you feel.

Where do you find truth?

Can everyone have their own truth?

Is the truth even a necessary part of our lives?

My brother was a stretcher of the truth in his younger, less mature days. By his own admission, he was a talker who always had an answer. In fact, he believed that if you were asked a question and didn’t actually know the answer it was perfectly fine to make something up!

It’s harmless, he believed, and besides, people just want answers, so give them what they want. Not the best philosophy, but it worked for a while . . .

When he became a father, all that changed. His four-year-old daughter, my smart niece, asked him a question. He applied his I’m-not-sure-but-I’ll-make-something-up philosophy to his response.

Although it had always worked before, this time she was skeptical of his answer and crossly told him, “You’re lying, Daddy! That’s not the truth.”

Busted! From then on, he couldn’t get away with those little white lies.

In a world full of so many people who decide on their own truth, determine other people’s truth and define truth, the topic is even more unclear, more relative and less concrete.

There are countless voices that claim to have the right answer to life’s issues:

Is there a God?

What are we here for?

Why is there suffering in the world?

What happens when we die?

When there is no firm foundation upon which you determine truth, it is impossible to decide what is true and what is false.

It’s a question for the ages: For thousands of years, philosophers, scientists and thinkers have considered, debated and argued about all aspects of truth. Those discussions had reached a feverous pitch during the time Jesus walked the earth.

In fact, just before he was handed over to be crucified, Jesus had an interesting exchange with Pontius Pilate in the Gospel of John: Then Pilate said to him, ‘So you are a king?” Jesus answered, ‘You say that I am a king. For this purpose I was born and for this purpose I have come into the world – to bear witness to the truth. Everyone who is of the truth listens to my voice.” Pilate said to him, “What is truth?”

It’s likely that Pilate was tired of hearing that question passionately debated and argued without a resolution. You can almost hear him sighing wearily. Then when Jesus gave no answer, Pilate washed his hands, literally and figuratively, of any wrongdoing by this clearly innocent man.

Many have speculated about this passage and its meaning, but one thing is certain: Pilate’s question, “What is Truth?” to the one person, Jesus, who IS truth ranks number one in the Irony Hall of Fame.

Certainly Jesus was exasperated and tired of telling everyone, particularly those who challenged him, that he came to tell, teach, and represent the truth.

“What set of values determines your schedule?

What view of life determines how you make decisions?

What perspective about the nature of and purpose for your existence forms your everyday street-level priorities?

How does your thinking shape what you do and say every day?”

There are only two choices, Tripp says, in a person’s way of thinking, the vantage point from which you look at life: Either “above” or “on earth.”

Choose “earth” and life is all about the physical here and now.

Choose “above” and life is all about the grand redemptive story, the perspective of the person and work of the Jesus Christ.

He clearly comes down on the side of knowing that truth comes from. God. For him and for all Christians, truth is absolutely not relative. It does not shift around from person to person, nor does it change with the culture.

Moral relativism is a dangerous thing but not surprising in a world where you can decide on your own gender, do whatever “feels” right and curse God or anyone else who tries to prevent you from being “your own person.”

Now let’s go back to the questions above:

Where do you find truth? The Bible

Can everyone have their own truth? No. (See above question.)

Is the truth even a necessary part of our lives? Yes

Is there a God? Yes.

What are we here for? To bring glory to God

Why is there suffering in the world? Sin

What happens when we die? Eternal life for Christians, Eternal suffering for non-Christians

Those answers represent truth, something that philosophers complicate (and that my niece intuitively knew when her daddy didn’t tell it!)

If you don’t know the earth-shaking, veil-tearing, blood-shedding truth that Jesus Christ came to share with humanity, here it is:

Truth can only be found in Christ. He IS truth. Choose to serve him today. He doesn’t promise a problem-free, pain-free life, but he does promise peace that passes understanding, the Holy Spirit that helps us in our weakness and a loving God who reigns on high.