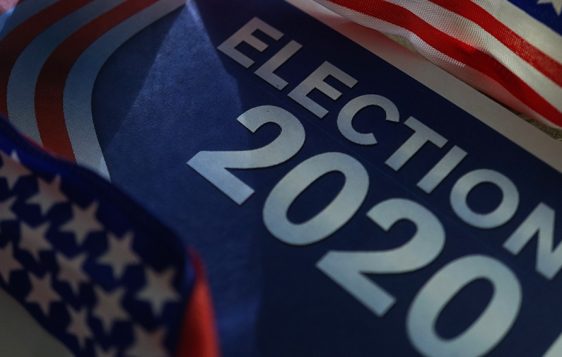 In two days Americans will either elect an incumbent or a new president.

He and his running mate will either be packing their bags or “measuring for new drapes” in a house painted white.

Reaction by the talking heads of various “news” outlets will either be something along the lines of, “I told you so” or “Didn’t see that comin’.”

If four years ago was any indication, people will either need therapy animals for comfort or they will sit back calmly and say, “Whew, glad that’s over.”

Either way, the world will continue its rotation around the sun, and humans will breathe in oxygen and exhale carbon dioxide.

Newborn babies will take their first breaths and other people will breathe their last ones.

People will go to work, come home, prepare meals, chat with their neighbors, lock their doors, get ready for bed, and close their eyes to sleep for an average of seven hours.

Life will go on in much the same way as people have done since time began.

So is this election really that important? Everybody tells us that it is. Everybody seems to have a strong opinion.  And everybody insists that their truth is the right one.

In the great scheme of things, November 3, 2020, is just a blip on the radar screen of time, and we need that perspective so very badly right now. But the even more critical need is God’s Truth.

Here’s what I remember about American elections growing up:

My parents loved their country, their flag, and the people who fought and died for this very imperfect nation. Both of my parents had fathers, uncles and an aunt (Army nurse) who served in the military. So we celebrated their sacrificial service.

I also remember that the only news came from three TV channels that broadcasted it 30 minutes a day and from the newspaper that was thrown onto our porch every afternoon.

I remember that my parents rarely missed those newscasts and trusted what they heard from people like Walter Cronkite. Then they voted and felt privileged to do so, but I couldn’t tell you whom they voted for. I got the clear idea that it didn’t matter, as long as you voted.

And I got the idea from my public school teachers that our country, although imperfect, was formed from very carefully thought out processes meant to represent an entire nation of diverse people.

And from both my parents and my teachers, I was carefully taught that what had happened to slaves for a good 200 years or more was incredibly wrong. But my entire family went a step further and made it clear to me that ALL people had value, and to treat them otherwise was the worst kind of evil.

So again I believed it, and even though I grew up in the South, I never heard a racial slur by anyone ever, as far as I can remember. I never saw people being mistreated because of the color of their skin. Did it happen? I’m sure it did, but I didn’t witness it.

But I digress . . . the real question is whether or not this election is as important as everyone says it is.

I’m here to tell you that IT IS NOT. Why? Because after it’s over God will still be in control of all humanity, right down to the most minute detail of life.

This is the Truth I referenced earlier. You may choose to believe otherwise, but I can testify that what Christians of every generation for two thousand years have said about Jesus, his earthly ministry, his death and his resurrection is Truth.

And I don’t just believe that because the Bible records Truth or because my Sunday schools teachers said so; I also believe it because God has taken residence in my soul, my mind, and my heart for more than four decades.

Mine is a changed life. You can’t take away my story. You can try and dismiss the Bible’s teachings, the evidence of scholars, and the testimonies of even the most ardent of atheists-turned-Christians, but you can’t take away what God has done in my life.

He is the reason I don’t care too awfully much about who wins the election.

He is the reason I won’t need counseling about the outcome.

He is the reason I won’t go out into the streets to protest.

He is the reason I can see people with different color skin yet treat them the same as anyone else.

I wish you all could know what it’s like to have that kind of joy and peace about an election that we’re constantly told is the most important one in history. When Jesus came to earth, he didn’t make it difficult for people to understand:

Because of Jesus’ love for all people, and through his free gift of grace that washes away the penalty of sin, he invites you to humbly surrender your life to him.

Your life and mine are in God’s hands, and because of that Truth, we have nothing to fear, and that includes governments, elections, hate-filled people, and a media that wants to divide Americans.

Find Jesus today, know Truth, and replace your anxiety with the joy that can only come from Jesus.