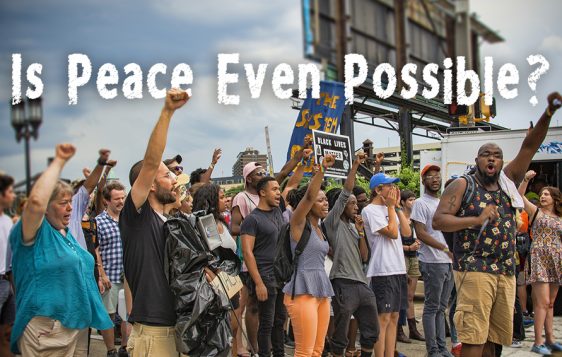 Oh, how we need it in our world today.

Before you say, “Duh, Captain Obvious!” or point the finger at “those people” who are the direct cause of the unrest we’re experiencing, let’s think about our own responsibility in it, and I’m including myself here.

My pastor recently tackled this subject of peace in a way that I had never considered, and the main takeaway for those of us who heard it was this:

It’s not about someone else’s behavior; it’s about my own responsibility to BE it.

To BE peace. “But hang on a minute,” you say, “I’m not the problem! I’m not creating panic in the streets or looting buildings. Some tricky preacher isn’t going to make me feel guilty about what someone else is doing!”

Yep, pastors do that. Meddling in our business. But he’s right: I need to be an “agent” of peace, which was point number four of his sermon, so let’s start from the beginning of my pastor’s nosy-ness . . .

In probably the most famous sermon of all time, he said, “Blessed are the peacemakers, for they will be called children of God.” (You can find a lot of other nuggets of gold in the New Testament book of Matthew chapters five through seven.)

So how can I make peace?

Make peace a high priority. The goal for Christians is helping, healing, uniting, and all the while standing for what is right. Believers should not be known for what they’re against but, using the example of Jesus himself, what they’re for. So we pick up the mantel of love without abandoning truth.

Jesus is this masterful merging of truth and love which equals this beautiful word called gracethat, when observed, comes out as peace.

Politics and social reform won’t accomplish it. And the United Nations hasn’t been able to do it in 75 years of trying.

Recognize the source of peace: Jesus. Isaiah prophesied in the Old Testament that he would be called the Prince of Peace meaning he would be the leader of peace and the pathway to it.

Before ascending into heaven, he told his followers, “Peace I leave with you; my peace I give to you. Not as the world gives do I give to you. Don’t let your hearts be troubled, neither let them be afraid” (John 14:27).

When his disciples were hiding out in fear after his resurrection John records that “Jesus came and stood among them and said . . . Peace be with you” (John 20:19).

Paul continued this theme of Jesus and peace when he said, “ . . . we have peace with God through our Lord Jesus Christ” (Romans 5:1).

In Ephesians 2:14, Paul identifies Jesus himself as our peace. How did Jesus provide this peace? Colossians 1:20 says that it was “by the blood of his cross.”

Is your heart troubled? Do you have anxiety? More than a healthy amount of fear?

Jesus is the answer, the source of that elusive peace you desperately seek.

Know the presence of peace. This is much more than the absence of conflict, and it’s where love and peace meet together. In Paul’s letter to the Galatians, he lists the fruits of the spirit with “peace” being one of them. So what does that mean exactly?

Well, if fruit is the result of planting, growing, pruning and harvesting, then surrendering to and obeying God results in his peaceful presence, the Holy Spirit.

The world might scoff at such a thing and say that sounds spooky, mystical, and fairy tale-like, but Christians have testified about it, been filled with it, comforted because of it, and convicted by it for 2,000 years.

Sometimes this peaceful presence called the Holy Spirit is the difference between happiness and despair, going on or giving up, loving or hating.

Become an agent of peace. It involves action that builds a bridge and brings reconciliation. Our calling is to reflect the heart of our Father, his character.

Author and speaker Zig Ziglar tells the story of Ben Hooper and his unlikely journey because of one of those “agents of peace.”

As the son of an unwed mother in 1870, young Ben was an outcast in the small Tennessee town where he grew up. By the time he was in first grade, he understood that he was not welcome in proper society, including the local church.

Ostracized and lonely, Ben later heard about a new preacher and his sermons about acceptance, but he knew his place, so he listened instead from the back row where he sat after the service started then left before anyone could see him.

But one Sunday he was unable to slip out unnoticed when people surrounded him on the back row. He tried to avoid being seen by church members, but he felt a firm hand clamp down on his shoulder and heard a booming voice say, “Whose boy are you?”

Terrified he looked up at the new preacher who smiled and loudly declared, “Well, I know you! The resemblance is unmistakable. You’re a child of God!”

Years later Ben would recall that moment as the beginning of a journey to his election and re-election as governor of Tennessee. The preacher brought peace and hope to his soul and sent him on a trajectory that only God could orchestrate.

It seems hopeless, impossible given the state of the culture, the trend toward to godlessness, but it should be a high priority, an all-encompassing and pre-eminent purpose in our lives.

If you know the peace that passes understanding, you are responsible, yes, I am responsible, to be “ambassadors for Christ” (2 Corinthians 5:20).

Do you know a Ben Hooper? Have you experienced the life-changing grace only Jesus offers?

Yes? Then you don’t have to know chapter and verse of the gospel message. Telling your story and loving the way Jesus does is all you need.

(adapted from a sermon by Jason Aultman)