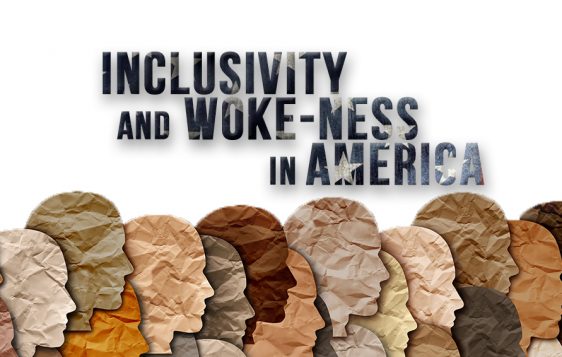 In the first week of January 2021, a video was shared across social media platforms. In this video, Missouri congressman Emanuel Cleaver closed a prayer with the words “Amen and a-woman.” Within hours, the video had become a meme, with hundreds of jokes popping up, people gendering other words that included the word man or men, such as mandate now being called womandate.

Although Cleaver’s attempt at gender inclusivity in prayer was met with ridicule from both sides of the fence, it is just one extreme example of how America has gone out of its way to be inclusive at every opportunity.

As an introvert, I understand the desire to be included. Most of the time during my college days, if I hung out with friends or attended any kind of social event, it was going to be because I was directly invited—I was just too shy to invite myself, even though I wanted to be included. When someone made the effort to include me in whatever they were doing, it made me feel great.

In a sense, it seems like that’s what American politics is trying to do. They want to make sure that everyone – regardless of gender, race, or status – feels included. And in and of itself, that is a noble goal. America has long been referred to as a melting pot of cultures where anyone can come and feel welcome. That has not always been as true as we’d like it to be, but it’s always been the goal.

In recent years, though, the goal seems to have changed, or at the very least escalated. We still want to include everyone, but we want to do it to such a degree that it has become impossible. A recent proposal by House Speaker Nancy Pelosi called for the removal of all gendered words and gender-specific language within the House of Representatives, replacing “father” or “mother” with “parent” and even going as far and as convoluted as to suggest replacing “parent’s sibling” for “aunt” and “uncle” and “sibling’s child” for “niece” and “nephew.”

So in an attempt to be all-inclusive to people who do not adhere to traditional gender types, Pelosi suggests that we do away with gendered language altogether.

What does this accomplish? Ultimately, nothing but the muddying of language to the point of confusion over the identity of the person being referred to.

So what does the Bible have to say about this? Certainly, there are no verses that demand we use gendered language, so we can’t say that Pelosi’s petition is some unforgivable sin. There is a separate conversation to have about God’s creation of man and woman and his ideals and intentions for gender roles, marriage, and the like, but that’s not my focus today . . .

While America’s newfound focus on being inclusive to the point of distraction might seem unproductive at best, there is something to be said for the goal of making all people welcome, the ultimate atempt at inclusion

Romans 12:5 tells us that “we, though many, are one body in Christ, and individually members one of another.” This means that all believers are equally welcome in Christ. As the church, there is no one who is less belonging than another. When someone puts their faith in Christ, they become part of the family, regardless of race, gender, political ideology, or previous religious belief.

Surrendering to Christ as Lord puts us all on equal footing.

However, should our sole focus be on diversity? Not to the point of distraction. I am blessed to attend a church that has a variety of diverse members in age, ethnicity, social class, and more, and we are all united by our faith in Christ. This is how the church should be; if a church has no diversity, it cannot thrive.

There are things that the older members cannot do anymore that the younger members can; there are nuggets of wisdom the elders can pass on that the younger generation does not know yet. There are people that a black family could reach more easily than a white family. Low-income and high-income families alike can serve as Sunday school teachers or work in the sound room. As a body of believers, we can be used in more ways because of our differences.

But even as we celebrate our differences, we cannot become so focused on them that they drive us to distraction. Jesus preached the gospel to the Samaritan woman just as he did to those in Jerusalem. He called a Roman-employed tax collector to follow him while also boasting an anti-Roman extremist as one of his disciples. He healed crippled and blind beggars and also went to wealthy Zacchaeus’ house to eat. However, Jesus did not let any people group go in need while he was focused on another.

His focus was not on exterior differences, but on interior similarities. All the people he preached the gospel to had the same need: salvation for their sinful souls. And that is where our focus should be today. Reaching the lost, regardless of who they are or what they look like.

It is important to meet the needs of the marginalized and to show them we care. Jesus did. He took time to sit down with a Samaritan woman and tell her how she could be saved. Maybe we need to spend some time focusing on the marginalized in our communities. But when he had reached her, he also went back to the people of his own heritage.

Inclusivity can be good. No one likes to feel left out, and it is un-Christlike to exclude anyone from our efforts to reach the lost. As we preach the good news of the gospel, we should make sure that we’re comfortable preaching it to anyone, not just people who look like us. But unlike Rep. Cleaver or Speaker Pelosi, we should not be so obsessed with it that it drives us to confusion.

Reach the lost. Their souls matter more than their exterior differences. That is truly being “woke”.