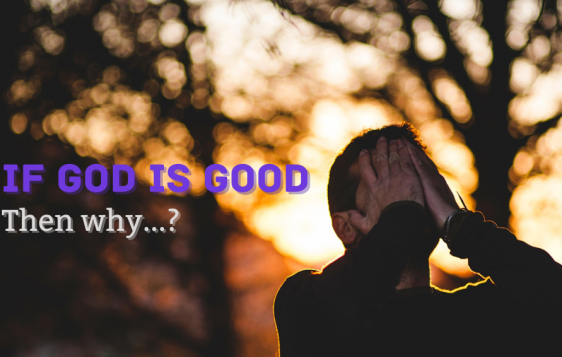 Not to intentionally nose-dive deep into theological philosophies, but I believe there’s a balance between God’s sovereignty and the free will he has given to mankind.

Does God give mankind the freedom to choose their eternal destinies? Yes.

But at the same time, does God allow things to happen to glorify himself and strengthen the church or individuals’ faith? Yes.

And honestly, there’s no easy answer, and no matter if you do believe in God’s all-powerful, all-knowing, and all-loving existence or not – there’s a leap of faith involved.

If you say, “I believe in science” that takes faith as there is a LOT of science and mystery in this world that is still undiscovered or unknown (UFOs, anyone?)

And science follows the line of thought that out of nothing everything came into existence.

This quote-unquote “nothing” is referred to as singularity, a moment in time where there was a big bang and everything exploded from one point in the universe that was originally nothing but at the same time somehow something . . .

We must even have faith in gravity to be able to know that what comes up will eventually come down. We won’t walk outside tomorrow and start floating towards the sun as if being sucked into a black hole.

So faith. What is faith then? Some of you might be familiar with this passage from Hebrews chapter 11 verse 11: “Faith is the substance of things hoped for, the evidence of things not seen.”

So faith is a committed trust. It’s something you can stand on firmly and believe, even if you can’t see the big picture quite yet. In a biblical context, it’s trusting that God can see the bigger picture and he works good in our lives on our behalf, even when we can’t see it.

One man in the Old Testament was asked to have faith when his strength failed him.

He was a commander of one of the most powerful armies in the land, second only to the king’s.

His name was Naaman, and God’s providence worked through his life and pushed him to the point of choosing to have faith.

In 2 Kings chapter 5 we read he was a mighty man of valor, but he was a leper.

Talk about a death sentence.

If you don’t know, leprosy is an awful skin disease that was common back in the ancient world where people would eventually become disfigured, disabled, and out casts from society.

So Naaman, a strong man who had accomplished great honor, was dying. And there was no cure.

However, an Israeli slave girl in the service of his wife one day told her mistress, “If only my master were with the prophet who is in Samaria, he would cure him of his skin disease.” (Which is pretty amazing as this girl was carried off in a raid and had enough compassion to try to help her master).

Desperate, Naaman listened to this advice and relayed the information to the King of Syria. Without hesitation, the king said, “Go, and I will send a letter with you to the king of Israel.”

Now, catch this – somehow along this telephone game, prophet became king . . . and the king of Israel could do nothing to heal the commander of Syria’s leprosy.

Alas, the mail didn’t work the same back in the day. So with the letter, 750 pounds of silver, 150 pounds of gold, and ten sets of clothing, Naaman traveled to Israel and sought an audience with the king.

The king of Israel received Naaman and read the letter, which said, “I have sent you my servant Naaman for you to cure him of his skin disease.”

In anguish and sorrow, the king tore his robes and said, “Am I God, that I can give life and take it away? Why is this man asking me to heal someone with leprosy? I can see that he’s just trying to pick a fight with me.”

Now, a fight between Syria and Israel would mean almost certain destruction for Israel and the last thing the king wanted was to make Naaman and his respective king unhappy.

But God had a plan. And Elisha the prophet, the captive Israelite was talking about to Naaman’s wife, heard of the king of Israel’s distress and sent this message:

“Why have you torn your clothes? Have him come to me, and he will know there is a prophet in Israel.”

Naaman was sent to Elisha’s house and he arrived with all of his glory through the grandeur of multiple horses and chariots.

Instead of coming out and greeting him in person, Elisha sent out his servant Gehazi to relay these simple instructions:“Go wash seven times in the Jordan and your skin will be restored and you will be clean.”

This response made Naaman angry. He had come all that way to be healed – him, the commander of the Syrian army! Just to be given directions to bathe in a dirty, stinking river.

He ranted, “I was telling myself: Elisha will surely come out, stand and call on the name of the Lord his God, and wave his hand over the place and cure the skin disease. Aren’t Abana and Pharpar, the rivers of Damascus, better than all the waters of Israel? Couldn’t I wash in them and be clean?”

So he turned and left in a rage.

Naaman thought he deserved more. He expected Elisha to put on a remarkable show and he would be healed that way. But God’s expectations of Naaman – to humble himself and to be faithful and obedient to directions that didn’t quite make sense; were different from Naaman’s expectations of God.

Luckily for this leper, his servants approached and said to Naaman respectfully, “If the prophet had told you to do some great thing, would you not have done it? How much more should you do it when he only tells you, ‘Wash and be clean’?”

So Naaman went down and dipped himself in the Jordan seven times, according to the command Elisha. Then his skin was restored and became like the skin of a small boy, and he was clean.

Then Naaman and his whole company went back to the man of God, stood before him, and declared, “I know there’s no God in the whole world except in Israel.”

Isn’t that an amazing story? Naaman chose to have faith and he was miraculously cured of an incurable disease (for that time).

And through this act of grace on God’s part, Naaman and his entire company of soldiers were able to see and experience God’s love in action.

God’s providence in allowing some bad things to happen (a little girl taken captive as a slave, a man diagnosed with leprosy, and all the other things Elisha had to live through up to that point) were all part of a bigger picture that lead to Naaman’s choice to have faith and to experience God’s grace.

At this moment, reflect on your own life.

Perhaps you’ve had some bad things and experiences happen to you that were completely out of your control, but there was a bigger purpose in them?

Or maybe right now life seems to be pelting you with rocks and you don’t know how to stand back up again and face your trials head on?

Sometimes, God’s answer is simple: to have faith and trust that the God of the universe works for you and not against you.

Find restoration in God’s grace today. Whatever is broken or hurting, give it over to God and let Him sustain you.

In love and truth,

Copyright © 2021 by Melody Turner  @http://mxtv.org No part of this article may be reproduced or reprinted without permission in writing from Lifeword.org.