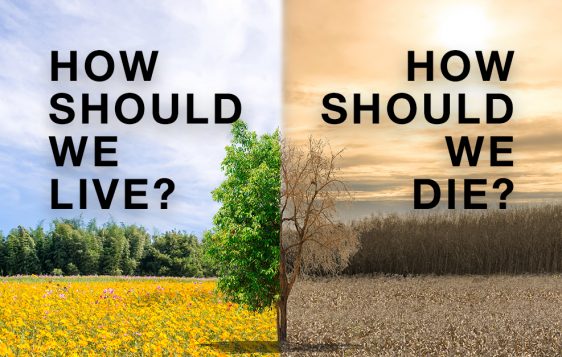 Last night I dreamed about my dad. It’s strange, because although he passed away eleven years ago next month, this is probably only the third time I’ve dreamed about him. It’s odd when it happens; I wake up and realize it was a dream, but it feels so fresh and real that it rips open the hole that I had finally gotten all boarded up.

My dad and I had a pretty complicated relationship, but I still miss him. If he were here now, we’d have a great time catching up and talking for several hours, but then we would need a break. That’s just reality. But I’d be willing to give it a go anyway.

One thing that was of utmost importance to my dad when he was diagnosed with pancreatic cancer was to finish well. He knew he was in for some hard times and he needed to know that his faith would remain strong, that what he had lived his life by would be sufficient when it was time to suffer and then to die.

I remembered that recently as I was thinking about the reality that many face with coronavirus.

If you know that you’re one of the vulnerable ones, that if you get the virus you could die, it’s easy to become fearful. That is true of me. I have an underlying medical condition and I am immune suppressed. My husband has acted as the royal guard, not allowing me to come in contact with anyone who has the remotest possibility of exposing me to the virus.

To fear: What if it did happen – I could really die?

To acceptance: I’m doing what I can and being sensible and trusting God.

I don’t mean to sound overly dramatic, but I had a moment where I did actually consider my own death. Even though I’ve lost both my parents and have been sick enough before that I could have died, I don’t think I have ever pondered my death. I don’t like to think about it.

I don’t want to die and, to be honest it scares me.

You have to be careful saying that around some Christians because you might get a scolding.

Christians aren’t supposed to be afraid to die, right? Maybe.

But I think it’s pretty human to carry that fear. For one thing, there’s a lot in this life you don’t want to miss out on. Plus, you don’t REALLY know what’s on the other side.

You believe; you have faith; you trust; you “know.” But there’s always that tug of doubt.

As I wrestled with these thoughts about death, I had the realization that faith doesn’t mean you never doubt. All the major heroes of the Bible had periods of doubt, even some in listed in Hebrews 11, the “faith chapter.” I also fully believe that the Lord gives grace for the moment. He will not leave his children when it’s time for them to die, especially if they have to suffer.

By God’s grace, my dad succeeded in holding onto his faith right up to the end. He was a witness for the Lord in the months and weeks leading up to his final days. As he got closer to death, and delirium set in, he “talked to” loved ones who had already passed and “saw” beautiful sights.

He also had moments of presence during which he got to say goodbye to his family members. His final words were, “I love you, baby doll” to his wife. He asked that at his funeral 2 Timothy 4:6-8 be read to the family after all the guests had exited. Verse 7 says, “I have fought the good fight, I have finished the race, I have kept the faith.”

It was a wonderful testimony. His faith was enough to live by and also enough to die by.

As I worked through all this in my mind, I felt at peace. I’m done pondering my own death for now, thank goodness. For anyone who doesn’t have that luxury at the present moment, I pray that you will find peace, comfort and trust through the Lord Jesus Christ and that your faith in him will sustain you.

Copyright © 2020 https://writerlythoughts.com/2020/04/14/a-faith-to-live-by-is-a-faith-to-die-by/ . Used with permission. No part of this article may be reproduced or reprinted without permission in writing from Lifeword.org