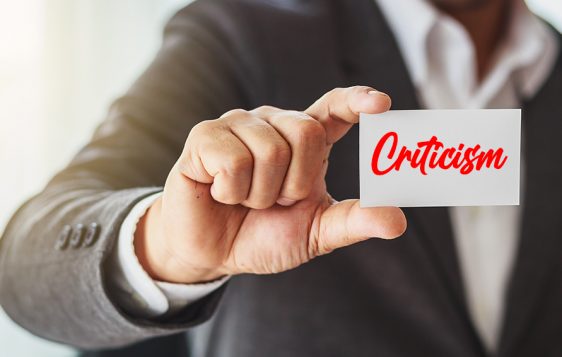 About thirty years ago, I was sitting in a meeting where a question was asked that has stayed with me all these years. It was a meeting to discuss a business decision that produced some outstanding results on one hand but created some tremendous problems on the other.

I can still remember the look on the face of my boss as he asked the following:

“How can something so good be so bad?”

Fast forward about twenty years and I can remember a similar question being asked by my pastor in a Sunday morning sermon:

“What do we do when our greatest strength becomes our biggest weakness?”

Both questions are really interesting because there are many things in life that have the ability to be good on one hand but bad on the other.

One of those things is criticism. It can be tremendously beneficial in helping us to recognize areas of opportunity in our lives on one hand. But it can be horribly destructive on the other hand when it comes from a judgmental and condemning spirit.

It is certainly true that some of the criticism that we are subjected to is not constructive. In fact, some of it is plainly destructive and evil and needs to be rejected or ignored.

But there is a fair amount that is indeed constructive and well intentioned. And our tendency to automatically reject and get defensive to all criticism is a gigantic mistake that robs us of opportunities to realize problems that we cannot see ourselves and to make beneficial adjustments.

Before we go any further, I need to make a confession. For many years, I did not handle criticism well that came from those in positions of authority over me. That was (is) indeed a big weakness of mine.

But on the other hand, I think that I did pretty well at encouraging, accepting, and acting on criticism from those to whom I had the responsibility of leading. I think that was one of my strengths.

Over the years I have come to understand that the proper handling of criticism is an integral key to success whether it be in a family, a church, a business, or whatever.

But just what do we mean by proper handling?

Fortunately, the Bible gives us an example to follow.

In Acts 6, we see criticisms arising in the early Church over the treatment of widows in a certain ministry. The Bible does not tell us whether the criticisms were valid or not because that really doesn’t matter. The criticism existed and needed to be dealt with regardless.

The apostles did not respond defensively or try to suppress the criticism. In fact, they called a meeting to consider the criticism. And in that meeting, they came up with a plan to address the issue. Their plan was the birth of the concept of what we now call lay ministry in the church. And lay ministry led to the continued forward progress of the Church.

So a criticism that had the potential for enough discontent and disharmony to interfere with and even stall the growth of the church was resolved quickly and effectively. And this positive outcome was achieved due to three simple actions:

1. There was no attempt to suppress the criticism whether it was valid or not.

2. Instead the criticism was considered in a non-defensive posture.

3. Out of that consideration came a very positive resolution and forward progress continued.

There you have it. A simple yet biblical example of how we should deal with criticism coming our way whether personally or organizationally. If we would follow that example when criticism pops up in our marriages, our families, our workplaces, our churches, or wherever, positive outcomes could be expected, and relationships could be saved.

Or we can stay with our “my way or the highway” defensiveness and watch it all eventually crumble. The choice is ours.

I probably should stop our discussion right here. After all, it is impossible to improve on any example modeled in the Bible. But after years of dealing with criticism with a mixture of both failure and success, I share the following ten observations that might be of help to you at a time when the sting of criticism could cause you short-term responses that turn into long-term regrets.

1. Remember that criticism can actually be the lifeblood of forward progress if we follow the example of the early church.

3. Since criticism is inevitable, we would do well to encourage the verbal expression of it so that it can be dealt with quickly and appropriately. The suppression of criticism will eventually and inevitably lead to an explosion or implosion.

4. Criticism is not automatically an attack or a sign of disloyalty. In fact, it may be an ultimate sign of intense loyalty and a desire to help.

5. Be aware that criticism is often meant to be helpful even though it may be expressed wrongfully. Perhaps giving our critic the benefit of the doubt until they prove otherwise could avoid some nasty reactions on our part that are not beneficial.

6. Criticism may be a sign of passion, caring, or other positive emotions and is often preferable to complacency and apathy.

7. Certainly there must be boundaries concerning criticism, but automatic defensiveness is deadly to relationships.

8. Automatic resistance to or suppression of criticism robs us of valuable feedback.

9. Criticism of others without accepting criticism from others is often indicative of pride, fear, or hypocrisy.

10. We must avoid the tendency to operate in a “rigged system” where we listen to what is favorable to us but automatically reject what is unfavorable.

Being criticized is not a matter of “if” in our lives but is a matter of “when” and “how often”. It is one of those things in life that can be either good on one hand or bad on the other.

And it is usually our response to it that determines which it will be.