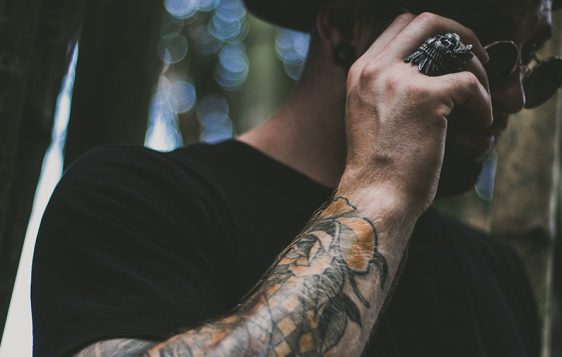 As usual, my plane was late and I did not think I would be able to make the connection. I was in the Minneapolis airport and I hurried to the tram to get to the other terminal as quickly as I could. When the doors shut I realized that there was only one other guy on the tram with me.

He was a pleasant enough looking young man but I wondered if we had anything in common: His arms were completely tattooed and I could not see one inch of skin that was not colorfully covered.  My son told me later that those are called “sleeves.”  Who knew?

Honestly, the work on his arms was very well done and I was admiring the skill of the artist. My concern was how to start a conversation with him and see where he was spiritually. I knew I did not have much time so I asked him if he minded if I asked him a question. He smiled, said he didn’t, and so I asked, “Did that hurt?” He was ready to tell me all about it and pointed to the inside fleshy part of his arm and said it was very painful when the tattooist began working there.

He was very friendly and I was enjoying the conversation tremendously when we came to the end of our tram ride. I asked him which gate he was going to and it was close to mine so we made the trek together. Then he asked me the one question I did not want asked: “What do you do for a living?” I told him he probably would not believe me, but he persisted in wanting an answer so I told him, “I’m a Baptist preacher.”

Please know that I am not ashamed of being a Baptist preacher, but through the years I have seen how people change around me when they find that out.  Either their language cleans up all of a sudden or they begin making excuses for why they do not go to church enough or some (and it’s really only been a few) have been pretty antagonistic.

This young man stopped in his tracks and he said something that broke my heart. “I didn’t think people like you talked to people like me!” Unfortunately, that is true all too often and many times we as preachers and Christians have given that impression, but I also told him that if Jesus were here physically he would want to talk with him.

I had to leave him to step on my plane just minutes before they shut the door but it caused me to wonder why so often “religious” people do not seem to notice lost people.  We become so focused on what we are doing for the Lord that we neglect the one thing we should be doing the most.  Telling others about him!

Reaching out to the un-churched and unsaved should be a non-negotiable core value in our lives.  It is not about how well educated you are, how much experience you have, or whether or not you have been trained in how to lead someone to Christ and the certificate to prove it is hanging on the wall.  The real question is – Are you sharing Christ with those around you?

When is the last time you told somebody about how wonderful your Savior is?

We must develop and show the ability to initiate contact with the lost.  There must be evidence in our personal lives and/or ministry of how we are actively pursuing the un-churched in order to win them to Christ.

Every child of God should know how to lead someone to Christ and if you do not know, shame on you!  You can develop the skill and you can get trained to boost your confidence level in sharing Christ, but more than anything else it is about the condition of our hearts.

You have to have the “want to” before the “how to” will ever be of any help to you! The people who will transform their communities through the gospel of Jesus Christ are those who are passionately in love with Him!

Maybe there is someone near you who thinks folks like you don’t talk to folks like them.

Maybe there is that individual just waiting for you to care enough to reach out to them.

Maybe you just need to ask them, “Did that hurt?”

Copyright © 2020 by Larry Barker @ https://healthychurchpodcast.com. Used with permission. No part of this article may be reproduced or reprinted without permission in writing from Lifeword.org.