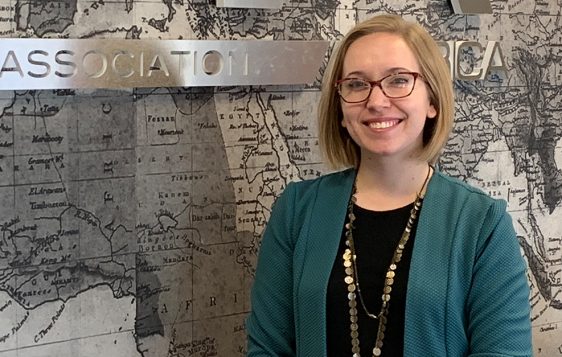 Heather Pantoja has recently accepted a position in which to serve at the BMA’s Global Ministry in Conway, Arkansas. I asked her to tell her story, and here it is in her own words:

“That summer was life changing in many ways, but as quickly and as passionately as God put it on my heart to go, the devil found ways to cut in. I allowed him to bring me down . . . “

In December 2004, a tsunami rocked the coasts of Southeast Asia. That following summer my mother and I traveled to Sri Lanka for disaster relief ministry. I was in ninth grade and my mom and I began a shoebox ministry at my school where I was allowed to hold voluntary assemblies to talk with fellow students about what my church was doing and why. We were able to collect around 130 shoeboxes with toys and toiletries that we repackaged to take to Sri Lanka.

It was an opportunity to share my faith and tell my classmates about the God who saved me when I was seven years old. I had grown up in a Methodist church, but at the age of twelve, we left the church and started attending a non-denominational church in my hometown. I was baptized in 2003 in a lake (Lake Norfork) near Henderson, Arkansas, my hometown.

I really began to feel God move through my heart while preparing for the trip, promoting the shoebox project and sharing my faith in Sri Lanka. But that’s when the devil put a stop to that and brought me down . . . hard.

After returning to high school for my tenth grade year, depression, reclusiveness, and anger all found a foothold in my mind and heart. I distanced myself from my church and my family. My heart was heavy knowing I was sinning, but instead of making changes, I continued.

What’s amazing about God, though, is that he didn’t give up on me! Even after years of living in sin, he still found ways to get my attention and to remind me of him.

In the summer of 2013, I met the man who would later become my husband. One of the first times we spent time together he asked me if I went to church, and for the first time in ages I felt embarrassed to say no. I eventually went to church with him, and soon I was going without him on the weeks that he was unable to.

God used him to get me in the building, but I still had to make some changes.

Sometimes it takes a crazy event to really see what is important. I returned to my apartment after a night out only to find my front door had been kicked in. I lived alone.

This shook me to my core! What if I had been home? What if they had hurt me? What if I DIED? After this event, I spent a lot more time in prayer and really reevaluating what was important to me. I rededicated my life to God. I never again wanted to question where I would be if I died. That was enough.

I attended a Spanish-speaking church with my now-husband in Conway where he later became a youth pastor. This development was exciting for me because it meant I could hear the lessons in English again, and we’d get to work with the awesome young adults from the church. Around this time he began working at the BMA Global Ministry Cenbter as an IT contractor.

I really had no idea what the BMA was, but he went full time there as IT coordinator just months before our wedding. I loved to hear about the people he worked with and about the amazing missionaries that he met. I always told him to let me know if a position opened up, or if I could help with anything.

At this time I was working in retail. I had worked my way up within one store chain in particular, and before I knew it I was blessed with the opportunity to become Operations Manager. This was an awesome financial boost that we appreciated, but I was still not very happy. I didn’t feel fulfilled. I went home every day physically and mentally exhausted. There was no balance between my work life and home.

I was thankful that God gave me the opportunity, but I was not happy.

My husband called me at work to let me know about the receptionist position opening up. I was so excited! Not only would I get to work the same hours as my husband, Obed, after years of crazy retail scheduling, but I would also get to work for a Christian organization for the first time in my life!

Working for the BMA (Baptist Missionary Association) has been a rewarding experience already. The call of missions is back on my heart but in a different capacity. I may not be the one to go, but I am here praying for and supporting those that do every day. I’m so thankful to be here. I’ve found the balance I needed with a work family that I already love.

God is so good and so faithful and I’m grateful for the opportunity he’s given me.