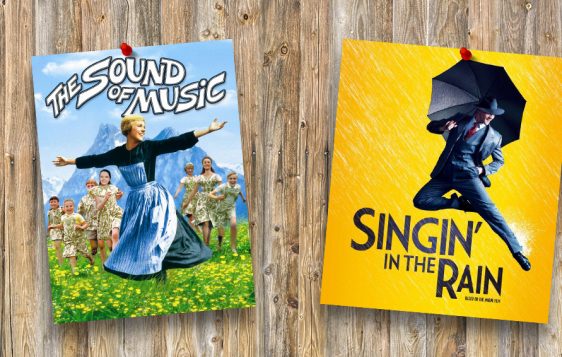 My husband doesn’t quite understand why I know every word to Hamilton or light up like a Christmas tree when I sit down and watch Singing in the Rain or White Christmas. I will say, though, looking back on some musicals as an adult, Cats is kind of weird looking, Phantom of the Opera is kind of creepy and Pirates of Penzance is a tad unrealistic.

But there are inspiring ones: Newsies, Annie, Sound of Music… They all give you an underdog to root for and a hope to seek.

“The sun will come out tomorrow.” Rights will be wronged. We will find a way to persevere through difficult circumstances.

Musicals have so much feeling in them. It goes beyond acting. Sometimes choreography and music amplify a character’s emotions and set the scene in a new and exciting way. It’s a story being told on multiple levels.

In many musicals, the protagonist is faced with a life of sorrow, a “bad guy”, or a journey to rise above one’s circumstances.

In Hamilton, Alexander has the weight of a tragic childhood on his shoulders and he desires to leave a legacy so strongly that everything else is pushed away. But the moment of personal agony is when he loses his firstborn son to a duel – which is a foreshadowing of his death. However, this allows him to seek forgiveness from his wife, comfort in God, and reevaluating what’s important.

In The Sound of Music, the threat of a Nazi empire hovers over the first act. By Act Two, the von Trapp family has to make a decision – join them or flee certain death. In difficult times, the family clings to love, God, and how music tells the story of hope.

In Newsies Jack dreams about “Santa Fe” and a world away from poverty and squalor. A world where he can be free. In Annie, a little red headed girl keeps her chin up in a not-so-great orphanage.

In the story of Jesus, he is faced with Pharisees who plot to kill him and who eventually succeed. Unlike other characters in musicals, however, Jesus knows what will happen because he is fully God, and before it all goes down, he prays in agony in the garden of Gethsemane.

After remembering the Passover with his disciples where he washes their feet and foreshadows the symbolic significance of his death by initiating the Lord’s Supper, they head out to the Mount of Olives to pray (Matthew 26:36-42; Mark 14:26-52; Luke 22:39-53; John 18:1-12).

Taking his three best friends closer into the garden than the others he said to them, “My soul is overwhelmed with sorrow to the point of death. Stay here and keep watch with me.”

He withdrew and fell with his face to the ground and prayed, “My Father, everything is possible for you. If it is possible, may this cup be taken from me. Yet not as I will, but as you will.”

In answer, an angel from heaven appeared and strengthened him for the approaching task – a trial, public lashing, humiliation, and death on a cross.

And being in anguish, Jesus prayed even more earnestly, his sweat like drops of blood falling to the ground.

Then he rose from prayer and returned to his disciples and found them sleeping, saying, “Simon, couldn’t you men keep watch with me for one hour?” he asked Peter. “Watch and pray so that you will not fall into temptation. The spirit is willing, but the flesh is weak.”

He went away a second time and prayed the same thing: “My Father, if it is not possible for this cup to be taken away unless I drink it, may your will be done.”

When he came back, he again found them sleeping, because their eyes were heavy. They did not know what to say to him. So he left them and went away once more and prayed the third time, saying the same thing.

Then he returned to the disciples and said to them, “Are you still sleeping and resting? Enough! Look, the hour has come, and the Son of Man is delivered into the hands of sinners. Rise! Let us go! Here comes my betrayer!”

So we have anguish, distress to the point of death, and an initial betrayal of the disciples for falling asleep instead of praying with Jesus and a place of surrender.

We see the humanity of Jesus here. He is experiencing stress to the point of bloody sweat!

He was in anguish, which in Greek has a deeper meaning of an athlete’s struggle. It’s like a runner on the final sprint of the race after many miles or a wrestler fighting excruciating physical and mental pressure.

God experienced anguish. Like Annie in the orphanage, or Alexander Hamilton losing his son, or the von Trapp family fearing for their lives as they’re hiding in the abbey… “For we do not have a high priest (Jesus) who is unable to empathize with our weaknesses, but we have one who has been tempted in every way, just as we are–yet he did not sin (Hebrews 4:12).

And yet, despite this cup of self-sacrifice Jesus is about to “drink”, He submits himself to the father’s will.

Amy Ekeh explains it in this way:

“Even before the cross, the garden is a place of surrender. Like the iconic garden of Eden, it is a place of weighty decisions where humanity and the divine both clash and converges. It is a place of prayer and self-examination, a place to grapple with the inevitable betrayals of human life. There will be times when we really have no choice but to follow the Master to the garden and allow the (anguish) to play out, and if we follow him closely, we too will fall to the ground in prayer; we will accept the quiet comfort the Father offers; we will rise with strength of spirit and drink deeply from the cups that do not pass.”

We will face difficult circumstances in life that we will not want to go through. It is easier to ask God to take these trying times away. But if you find yourself praying in your own “garden” today, know you are not alone. And the trials of this life – God has a reason for.

Jesus had to face his “cup” to save the entire world.

In musicals, our favorite characters go through challenges so they can develop, grow, and take a stand for what they believe in. When the rain comes, they sing through it.

Don’t give up hope – you are not alone. Even God sent an angel to Jesus to strengthen him when he felt abandoned.

Copyright © 2021 by Melody Turner @ https://mxtv.org/singing-in-the-rain/. No part of this article may be reproduced or reprinted without permission in writing from Lifeword.org.