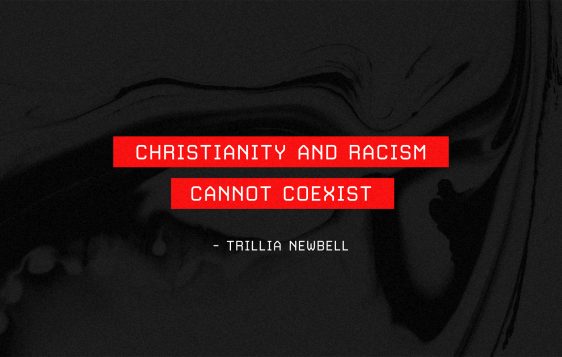 Racism is not a new story and sadly, it isn’t an old one either.

It wasn’t so long ago that the Little Rock Nine took literal steps to ending segregation in Arkansas over 60 years ago.

It wasn’t so long ago that Jim Crow laws dominated the south.

It wasn’t so long ago where one person could literally own another person in the United States.

It wasn’t so long ago that an African American man was suffocated to death by a white police officer as he begged to breathe.

So, where is God in all this?

What does the Bible say about racism, discrimination or plain hatred of people who are different from you whether it’s by the color of the skin or their religious beliefs?

Why is the world bubbling and oozing hatred, anger and anarchy?

I think the answer can be simplified to this: God does not discriminate.

“There is no longer Jew or Gentile, slave or free, male and female. For you are all one in Christ Jesus.” (Galatians 3:28)

God does not show favoritism (Romans 2:11). And in his kingdom, God sees every single person as worth his love and worth dying for (John 3:16).

But God also does not see people like we do. He looks at the heart and not the outside shell. As an example of this, we need to remember a story from the Old Testament.

If we flip backwards in our Bibles, we can find a story about David being anointed as king over all of Israel. Saul is currently king and he isn’t the best . . . but he is what the people wanted: a tall, handsome ruler who looked the part.

However, when push came to shove, he was a coward who didn’t put his faith in God.

So God decided it was time for someone else to be king and sent his prophet Samuel to find him among the sons of Jesse in the town of Bethlehem.

Samuel finds Jesse, who presents his sons one by one from oldest to youngest. When Eliab, the oldest, passes by, Samuel thinks to himself, “Surely this one is kingly”.

But the Lord told Samuel, “The Lord doesn’t see things the way man sees them. People judge by outward appearance, but the Lord looks at the heart.” (1 Samuel 16:7)

God wanted the youngest son, the shepherd boy who wasn’t even a part of the presentation to Samuel, to be the next king. When David is finally summoned, God tells Samuel to anoint him, which he does.

One of the best biblical example is the story of the woman at the well. It is a beautiful picture of God’s love and grace that goes beyond gender, race or past sins. It’s a story of redemption:

When Jesus came onto the scene 2,000 years ago, the Jews and the Samaritans despised each other. Jews would literally walk twice as far to get from one town to another to avoid Samaria. But Jesus dared to be different – he intentionally went through Samaria and met a woman at a well.

“It was about noon [when] a woman of Samaria came to draw water. ‘Give me a drink,’ Jesus said to her.

‘How is it that you, a Jew, ask for a drink from me, a Samaritan woman?’ she asked him. For Jews do not associate with Samaritans.

Jesus answered, ‘If you knew the gift of God, and who is saying to you, ‘Give me a drink,’ you would ask him, and he would give you living water.’

‘Sir,’ said the woman, ‘you don’t even have a bucket, and the well is deep. So where do you get this ‘living water’? You aren’t greater than our father Jacob, are you? He gave us the well and drank from it himself, as did his sons and livestock.”

‘Sir,’ the woman said to him, ‘give me this water so that I won’t get thirsty and come here to draw water.’

‘Go call your husband,’ he told her, ‘and come back here.’

‘I don’t have a husband,’ she answered.

‘You have correctly said, ‘I don’t have a husband,’” Jesus said. ‘For you’ve had five husbands, and the man you now have is not your husband. What you have said is true.’

‘Sir,’ the woman replied, ‘I see that you are a prophet. Our ancestors worshiped on this mountain, but you Jews say that the place to worship is in Jerusalem.’

Jesus told her, ‘Believe me, woman, an hour is coming when you will worship the Father neither on this mountain nor in Jerusalem. You Samaritans worship what you do not know. We worship what we do know, because salvation is from the Jews. But an hour is coming, and is now here, when the true worshipers will worship the Father in Spirit and in truth. Yes, the Father wants such people to worship him. God is spirit, and those who worship him must worship in Spirit and in truth.”

The woman said to him, ‘I know that the Messiah is coming’ (who is called Christ). ‘When he comes, he will explain everything to us.’

Jesus first revealed himself as the Messiah (Savior of the world) to a Samaritan woman. God offered her eternal life, despite her race or gender. Because to him, her heart mattered more than her skin color.

For those who do judge and discriminate, God warns this:

But for those who choose to love people and see people through God’s eyes, regardless of what man-made “category” they fall into, they will be living for the kingdom of heaven.

John says in the book of Revelation while observing heaven, “After this I looked, and there was a vast multitude from every nation, tribe, people, and language, which no one could number, standing before the throne and before the Lamb. They were robed in white with palm branches in their hands. And they cried out in a loud voice: Salvation belongs to our God,who is seated on the throne, and to the Lamb!” (Revelation 7:9).

Heaven will be full of people from every tribe, tongue and nation.

Let’s choose to be on the positive side of history. And maybe, maybe one day, racism will be an old story and a thing of the past instead of horrific actions happening right now causing a nation to implode.

Copyright © 2020 by Melody Turner @ https://honest-maybe-relatable.com/2020/05/29/a-story-both-old-and-new/. All rights reserved.. Used with permission. No part of this article may be reproduced or reprinted without permission in writing from Lifeword.org.