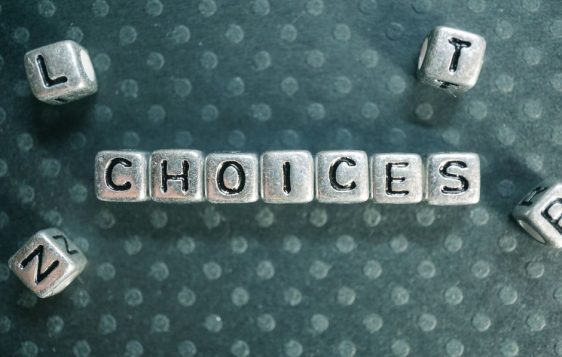 In A Christmas Story, little Ralphie is obsessed with getting a Red Ryder, carbine action, two-hundred shot range model air rifle. In other words, a BB gun. But much to his dismay, everyone he talks to, tells him how dangerous they are. “You’ll shoot your eye out” is the continuous mantra of his teacher, his parents, and even Santa and his elf.

And then, Christmas morning came, and hidden behind the tree was a long box that somehow had been missed in the morning madness.

Ralphie ripped open the paper, discovered his BB gun, and immediately prepared to go out and shoot.

Once outside, he shot his gun, and it happened. Just like everyone said. “You’ll shoot your eye out”. With the ricochet of the BB, his glasses took the hit, and saved his eye. But now he had to explain his glasses being broken…

Choices. Two options laid out right in front. The right and the wrong. One a blessing, one a curse. Moses spoke to the Israelites, the chosen children of God and showed them they had two choices. And just like Ralphie, even though the Israelites had been warned, their actions were their reply.

Lust, temptation, greed… many things draw us away from the Lord and into sin. We knowingly choose the wrong way, the cursed way, because of our flesh.

Maybe you struggle with the flesh. Maybe you have sinful desires that you give into, knowingly choosing what God has condemned. Let me tell you this today, God forgives.

“And the scribes and Pharisees brought unto him a woman taken in adultery; and when they had set her in the midst, They say unto him, Master, this woman was taken in adultery, in the very act. Now Moses in the law commanded us, that such should be stoned: but what sayest thou? This they said, tempting him, that they might have to accuse him. But Jesus stooped down, and with his finger wrote on the ground, as though he heard them not. So when they continued asking him, he lifted up himself, and said unto them, He that is without sin among you, let him first cast a stone at her. And again he stooped down, and wrote on the ground. And they which heard it, being convicted by their own conscience, went out one by one, beginning at the eldest, even unto the last: and Jesus was left alone, and the woman standing in the midst. When Jesus had lifted up himself, and saw none but the woman, he said unto her, Woman, where are those thine accusers? hath no man condemned thee? She said, No man, Lord. And Jesus said unto her, Neither do I condemn thee: go, and sin no more. Then spake Jesus again unto them, saying, I am the light of the world: he that followeth me shall not walk in darkness, but shall have the light of life.” (John 8: 3-12)

Today is a new day. Lamentations tells us that His mercies are new every morning. Today is the day to surrender to the Lord. Just as He forgave this woman who had been caught in the act of adultery, so will He forgive you.

You can start anew today. Repent of the past and follow Christ.

Go and sin no more.