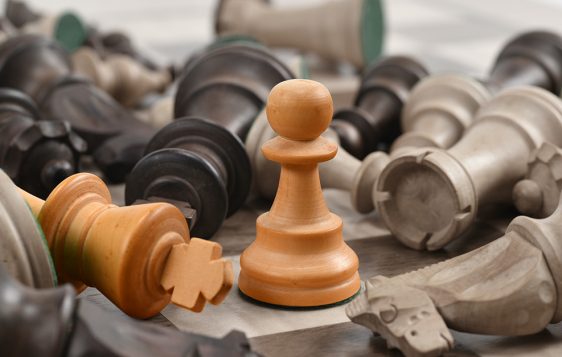 I’ve never liked playing chess because I have never had the satisfaction of winning.

As a kid, my brother would convince me to play him, and then he would proceed to checkmate me every time. So I quit playing. If I was going to lose, I’d rather give up than give my brother the satisfaction of beating me.

Perhaps I missed the point. I was so obsessed with winning that I missed two decades where I could have been learning from losing, becoming a better player, and having a greater appreciation for the game.

“I hate chess,” I told my husband this week when my brother, once again, wanted me to play chess with him on an app. “You play him; I don’t want to lose to him,” I said.

But since I recently graduated and have more time on my hands than I know what to do with, my husband suggested I watch YouTube videos or look up strategies online to get better, then play.

So I’ve lost to my brother twice now this week and twice to my husband as well. I still have yet to win a game.

And yesterday after my husband took my queen, I returned to my childish ways and gave up mad and frustrated. Later he told me, “You really shouldn’t have given up. You were two moves away from mating my king, but you gave up on yourself.” Which, of course, frustrated me further, because I took a loss when, for the first time, I actually had a chance of winning!

But when something happens like that, when a vital piece is taken from us, maybe we let our emotions take over and we can’t see the whole board in perspective anymore.

Maybe it’s losing someone we love.

Maybe it’s not getting that promotion, the car, or what we thought we wanted.

Maybe, if we get frustrated and give up when life takes something from us, we fail to see what we can have, what’s been there, and is only a few moves away.

There’s a reason chess has been played for 1500 years. It’s a game that involves a lot of strategy and thinking a few moves ahead as well as knowing your opponent.

But if we learn from the mistakes we make, we can move on and become better players in the game of life. And in life, there is a better grandmaster than we could ever become – God.

In the book of Ruth, a young Moabite woman lost her husband, her father-in-law, her brother-in-law, and bravely left her homeland and her family behind to live as a pauper with her mother-in-law.

Now this is a woman who doesn’t give up. Read what she says to Naomi after Naomi tells her to go home in Ruth 1:16-17:

“Wherever you go, I will go; wherever you live, I will live. Your people will be my people, and your God will be my God. Wherever you die, I will die, and there I will be buried. May the Lord punish me severely if I allow anything but death to separate us!”

Now that is determination and love.

Ruth loses her provider and travels to a foreign land with her mother-in-law. She goes out, works in a field to bring home food, then catches the eye and eventually the heart of a man named Boaz. They get married and she has a son named Obed, who was the father of Jesse who was the father of David. And David’s line extends all the way to the Messiah – Jesus Christ.

So Ruth, a foreigner, a pawn on the board of chess who is loyal to her bishop and protects it all the way to the end of the board . . . is promoted to a queen in the genealogical line of the King of Kings.

Ruth lived by faith and trusted in her ultimate grandmaster.

God has seen every scenario, and if we trust in his guidance and direction, even when it might mean losing something important to us, he may have something better in store for us only a few moves away.

We just had to lose a few pieces to get there.