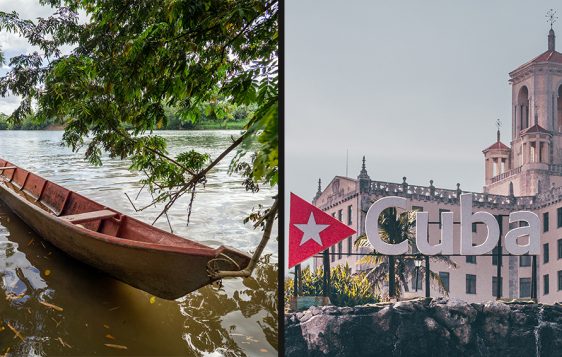 “Missions has always been part of my life. When I was twelve I went with my brother-in-law to the jungles doing ministry. Then at fourteen I would go to the jungle to preach and do different chores for missionaries, driving them or whatever needed. This year I will celebrate forty years of ministry.”

Oscar Gaitan has been serving Nicaraguans for four decades, first when he was asked in 2004 to serve as missions coordinator Nicaragua then ten years later when he began broadcasting gospel content on Lifeword Community Radio. He is one of many missionaries associated with both BMA ministries.

But before that, less than a year after he began attending seminary and preparing for ministry, nineteen-year-old Oscar was forced to put a hold on those plans. Like other young men, he was required to go to the jungle and fight in the second Nicaraguan civil war. (The first one was in the 1960s.)

It was a life-altering event, and his only comment about those two years of military service is that, “God protected me.” During the war he met Cuban soldiers and learned about “the system”, which is what Cubans call their communist government. Although he couldn’t possibly have know it then, decades later that experience with fellow soldiers would be important to a ministry God had planned for him.

At the same time, his future wife Tamy was also preparing for ministry. She explained that, “My mother is American, and my father was Nicaraguan and in the 60s they met in Nicaragua. When the first civil war started we came to the States when I was six. I grew up in Dallas, went to school and when I was nineteen and the war ended, my dad wanted us to visit his family. They wanted to stay two weeks, but I wanted to stay two months because I had always loved missions. During those two months, Oscar was my driver and he would take me to the different churches, and he has been my chauffeur ever since!”

During the next eight years, Tamy finished college then served as a missionary in Mexico for three years with John and Shirley Ladd. Oscar continued in missions work until the two finally reconnected then  married in 1998. Oscar wanted to continue studying at seminary, so they went back to the States in 2003. But again his plans were interrupted when the Missions department asked him to be missions coordinator of Nicaragua in 2004.

Also in 2004, the Gaitans adopted two-week-old Lidia, and nine years later, they adopted a baby boy they named Ostali, a combination of “OScar, TAmy, and LIdia”.

Currently there are 28 churches, including sixty new church plants, in Nicaragua. While those new missions are being established, Oscar says his job is to focus on them. Although Nicaraguan church pastors have been meeting to fellowship and share with each other for many years, they did not form an association until October 2019 when they officially became BMA Nicaragua.

One of the Gaitans’ most important ministry tools has been Lifeword Community Radio, which Oscar has used almost since its inception to produce gospel programming. But with the new Lifeword Cloud he can record and share even more audio and video content.

One of those programs, Discipulado, is an audio discipleship tool downloadable for those who can’t read or write. In addition to sermons and Bible teaching, he records a weekly children’s program called Club Enfantil (Kids’ Club). Lidia and Ostali Gaitan are part of producing the program, which uses songs, scripture memory and Bible teaching.

Lifeword’s cloud technology has also given Nicaraguan congregations another avenue of service to their people. Pastor Javier Munoz Rios uses his technology skills to record Lifeword content and works with Oscar in video and audio production in a nearby city. And in each of their churches, men and woman help with recording, editing and uploading Lifeword programs.

It was eleven years ago, Oscar remembers, when International Missions Director Phil Knott challenged a group of pastors, saying, “Someone needs to go to Cuba.” Oscar raised his hand, but when he told Tamy they were going, she was not in favor of it. Later God changed her heart.

After several trips to Cuba, Oscar and Tamy met a new convert, Jesus (hey-Seuss) Martin, who first heard about salvation years ago while listening to a Lifeword broadcast called El Contacto Cristiano on an old Russian radio. That program caused him to study and search on his own to understand, a difficult task when there is absolutely no concept of God in Cuban culture.

Now Brother Jesus is being discipled and trained to lead the work in Cuba.

The Gaitans explain “the system” (communism) this way: Cubans have complete trust in what the government says about their way of life. They believe that it is meant for their good and for their protection. Communism is their god.

Tamy said, “The government has done a great job in putting the system in their brains and letting them know “this is the way to live.” They like it and they will die for the system. When we share the Bible with them and that this isn’t the end and God is over everything, they begin to understand.

“What happens in the system is that they see people with drug problems and other things they trusted the system to weed out. When we tell them that it’s because of sin, their minds are open to learn more.”

They must begin at square one with these people who are hungry to learn about the Bible, so when the Gaitans visit Cuba, they bring Spanish-language Bibles and teaching materials.

The Book of Truth

Seeing lives changed by the gospel, especially through planting seeds, has been a blessing to the Gaitans. Lisandra is an example of how God reveals truth even in a godless belief system.

Tamy explained her story: “Lisandra’s husband was the first person ever saved with us, and he asked me to show his wife the plan of salvation. When I showed her the Bible and told her it is God’s Word, and it’s true, she said, ‘I have waited eighteen years to have this book in my hands. When I was twelve, my grandmother told me there was a book that was true and not what the government was saying. I know this is the book.’ She remembered he grandmother’s words, God opened her eyes to see that the Bible she held was the true book, and she was saved.

“We have been blessed by going to Cuba,” Tamy says, “and we have seen growth. People plant seeds in all kinds of ways. Like Lifeword and the broadcast Bro. Jesus heard a long time ago and Lisandra’s grandmother’s words. The gospel comes to life and we are blessed to see seeds planted and growing,”

As they continue to travel to Cuba, Oscar is now focused on Bro. Jesus, teaching him, then ordaining him when he’s ready. Then Jesus will train the five leaders around him, and they will assist with the work in Cuba.

There are two cell group meetings in two cities, and they are the heart of the ministry in Cuba. Although leaders would like to have a place to meet on Sundays, that is unlikely since there have been no permits for church buildings in fifty years, not because of hostility toward them, however. The system is only concerned about opposition, so churches can do or say anything as long as there’s no criticism.

When the Gaitans began going to Cuba, they had to be careful about the Bibles and teaching materials they brought in, but since Castro’s death, luggage searches are not as thorough. A Bible institute has been established to teach twenty-two classes. When they are completed, Oscar says there will be a graduation of mostly older adults, but he would like to see younger people being trained and disciples.

In the meantime, they will continue to travel there. “Cuba is totally different,” Tamy says. “The people don’t have goals or aspirations because everyone earns the same wages. They believe ‘God’ is the system, or it’s Castro or the god of helping another person achieve. Or there’s the god you can make of yourself. Even Jesus has difficulty understanding.”

Cubans are hungry to understand who God is.

On a recent trip to “the island”, as they call it, Bro. Jesus gave Oscar and Tamy the old Russian Radio where he first heard the gospel on El Contacto Cristiano, which is still on the air and still pointing people to Jesus. For the Gaitans, it was a very special gift and a reminder of how God plants seeds in all kinds of ways whether it’s through an old radio, a civil war in the jungle, or a grandmother’s words of hope to a young girl.

Copyright © 2020. Used with permission. No part of this article may be reproduced or reprinted without permission in writing from Lifeword.org.