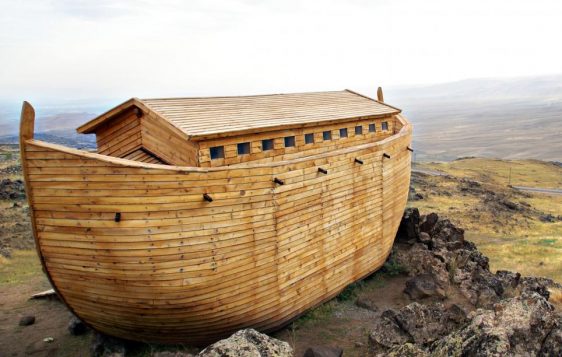 When I was a kid, my sister, cousins and I would sit down with the JC Penny and Sears catalogs and plan out our baby rooms.

Yes, I was like seven, but it was still fun. We would flip through the pages and decide which theme we liked best – my favorite was the Noah’s ark theme. It was complete with bedding, a lamp, wall decor, a rug and a diaper hanger. It was a sweet idea of all the cute animals on a big boat.

But when you really study scripture about Noah’s ark, you realize the scene wasn’t sweet after all… the story is about the wrath of God coming in the form of a flood to wipe out the sinfulness of the earth.

“The Lord then said to Noah, ‘Go into the ark, you and your whole family, because I have found you righteous in this generation. Take with you seven pairs of every kind of clean animal, a male and its mate, and one pair of every kind of unclean animal, a male and its mate, and also seven pairs of every kind of bird, male and female, to keep their various kinds alive throughout the earth. Seven days from now I will send rain on the earth for forty days and forty nights, and I will wipe from the face of the earth every living creature I have made.’ And Noah did all that the Lord commanded him. Noah was six hundred years old when the floodwaters came on the earth. And Noah and his sons and his wife and his sons’ wives entered the ark to escape the waters of the flood. Pairs of clean and unclean animals, of birds and of all creatures that move along the ground, male and female, came to Noah and entered the ark, as God had commanded Noah. And after the seven days the floodwaters came on the earth. In the six hundredth year of Noah’s life, on the seventeenth day of the second month—on that day all the springs of the great deep burst forth, and the floodgates of the heavens were opened. And rain fell on the earth forty days and forty nights. On that very day Noah and his sons, Shem, Ham and Japheth, together with his wife and the wives of his three sons, entered the ark. They had with them every wild animal according to its kind, all livestock according to their kinds, every creature that moves along the ground according to its kind and every bird according to its kind, everything with wings. Pairs of all creatures that have the breath of life in them came to Noah and entered the ark. The animals going in were male and female of every living thing, as God had commanded Noah. Then the Lord shut him in. For forty days the flood kept coming on the earth, and as the waters increased they lifted the ark high above the earth. The waters rose and increased greatly on the earth, and the ark floated on the surface of the water. They rose greatly on the earth, and all the high mountains under the entire heavens were covered. The waters rose and covered the mountains to a depth of more than fifteen cubits. Every living thing that moved on land perished—birds, livestock, wild animals, all the creatures that swarm over the earth, and all mankind. Everything on dry land that had the breath of life in its nostrils died. Every living thing on the face of the earth was wiped out; people and animals and the creatures that move along the ground and the birds were wiped from the earth. Only Noah was left, and those with him in the ark. The waters flooded the earth for a hundred and fifty days.” (Genesis 7:1-24)

There are four key points in this scripture we need to see.

Every living, breathing animal was aboard that boat.

I can’t even fathom how Noah was able to check them off, so this was purely directed by God. The Bible doesn’t say how he brought them to the ark, just that he did. And every one of them had a purpose and a place on that boat.

2. The windows of heaven were opened.

Until this point, it had never rained. Water had never come from the sky; it was always provided from the earth.

Can you imagine being Noah, building this ark for 120 years and people coming by and asking, “What are you doing?” And Noah replying that it would rain so much he would need a boat this size to save them?

Rain? They didn’t even know what that was! They couldn’t imagine it.

They probably laughed at him and labeled him as crazy.  I’m sure news traveled fast, and everyone knew about the crazy man building the gigantic boat and for 120 years, not one person asked to go with him.

Not one person believed God was powerful enough to make it rain and kill them all.

Not one person believed He was a God who would destroy sin with His wrath.

Not one felt the need to repent and turn to God.

Verses 21-23 tell us exactly what happened – every man and every living thing not on the boat was destroyed.

Can you imagine what that must have been like when the door shut, and Noah and his family could hear their friends and relatives banging on the door? They probably were screaming for help because the rains had come, and now they believed.

But it was too late.

There wasn’t a doorknob on the ark – Noah had no control over the door.

It was strictly by God’s power and authority that he sealed them inside the ark just as he seals us with our salvation.

Salvation has nothing to do with our works. Christ alone is the one who saves us, and we are sealed with his divine power and authority through his Holy Spirit.

There is coming a day when the Lord will return. His wrath will be poured out upon the earth once again but this time it will be for the final judgment.

Those who believe in the Lord and have repented of their sins will be called away to their home in heaven, they are sealed.

But God has been patient, He has given us all the time we need to turn to Him.

Today is the day of salvation. Will you trust in Jesus to save you just as Noah trusted in God to save him from the flood?