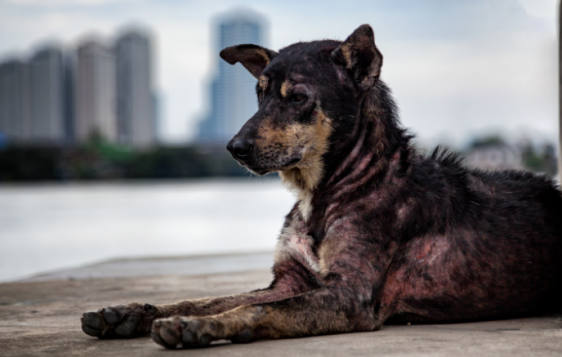 Like a dog that returns to its vomit is a fool who repeats his folly. Proverbs 26:1

This is not a proverb found on cute crafts for sale at your local farmer’s market. It is not one that elicits the “feels” as many are inclined to seek today. Instead, this proverb causes us to turn away in disgust as the word picture churns the stomach. This proverb, though often forgotten, has been inspired by the Holy Spirit for inclusion in the Word of God, which means it is there for a purpose. That purpose is for our teaching,  reproof, correction, and, ultimately, training in righteousness (2 Timothy 3:16).

A cat and its vomit

If you own a dog or a cat, you have undoubtedly shrieked in horror when your beloved Fluffy would regurgitate its food then begin eating it. What is worse, and arguably more disgusting, is when one of your other loving, cuddly pets begins to sniff around and show interest in ingesting the remnants of his friend Fido’s lunch. This is understandably foul and loathsome to us as humans, but in the dog or cat world, it is simply their nature.

I recall having cats when my wife and I first had a child. Inevitably, my son spit up all over his crib and before I could get him out to clean him up, the cats swarmed like a wolf pack about to enjoy the spoils of a kill. Initially, I attempted to throw the cats out of the crib, but they relentlessly returned to savor their snack. You would have thought I was depriving them of some great gourmet meal. Finally, I gave up on keeping them out of the crib and instead saved my infant son from becoming an appetizer.

Once I made sure he was no longer in danger of spitting up again, I changed his clothes and laid him down on his play mat. I returned to strip the sheets from the crib only to see that the cats had “cleaned” up all of my son’s vomit. Even though I still changed and washed the sheets, I clearly recall thinking that for once the cats were worth owning. Nonetheless, it was disgusting to think about the filthy felines enjoying what my son’s stomach had rejected.

A fool and his folly

The Bible never speaks highly of fools. A fool brings harm to his companions (Proverbs 13:20). A fool suffers affliction because of his ignorance (Psalm 107:17). A fool claims to be wise (Romans 1:22). Here the writer of this Proverb likens a fool to a dog (or cat) that returns to its vomit. It is instinctual. And it is disgusting.

This explains why the drunkard cannot help but return to drinking.

This explains why the liar seems to always tell lies even with the most innocuous of statements.

This explains why the thief cannot help but steal the paperclip.

The fool returns to his folly. It is the source of his nourishment (Proverbs 15:14). It remains instinctual.

But there is hope for the fool. The fool is offered the good news of the sacrifice of Jesus Christ on his behalf. Jesus suffered for the fool because the fool did not know of his own suffering. Jesus bore the wrath of the just judge because the fool only mocks the guilt offering (Proverbs 14:9). Jesus died for the fool because only Jesus could redeem the life of the fool. This is why the Bible makes clear that the beginning of wisdom is the fear of the Lord (Proverbs 9:10).

This is indeed good news! But what about the Christian who has been redeemed by Christ’s blood yet returns to his vomit?

The Christian, his folly, and his vomit

Worse still, Satan uses our past sins to not only continually accuse us of sinfulness, but also to entrap and enslave us to our sinful past. It is as though we are involved in a daily “show and tell” with the devil: “You say you’re saved, but do you remember exhibit A?” or, “Oh, so you are walking with the Lord now, huh? Remember this picture from the woods in your childhood?”

The most obvious vomit people return to today is that of pornography. Whether it is in our mind, on our private screens, or in our pocket or purse, it is there and accessible at all times. No one will be the wiser. Satan makes you think like that, and if we are honest, he is extremely effective. After all, he has had centuries to perfect his trade.

We know better, but Satan makes that vomit look so enticing. This is why the Spirit-inspired sage writes, “the folly of fools is deceiving” (Proverbs 14:8). We are easily duped into acting like animals. We have fooled ourselves into thinking that a pixilated image is harmless, or that one drink won’t do us in, or that our little white lie won’t hurt anyone. Until such time that we come to understand that we are malnourishing ourselves on our own vomit, we will be unable to grow in holiness and wisdom of the Lord.

In the end, the folly of the fool will only lead to ruin, and then, just like Adam and Eve in the garden of Eden, the fool will rage against God (Genesis 3:12-13; Proverbs 19:3).

To paraphrase a hymn from yesteryear, What can wash away our vomit? Nothing but the blood of Jesus! Christian, you need to see your sin for what it is . . . a returning to your own vomit. If you are truly saved, then you have the power of the Holy Spirit dwelling in you.

Ask the Spirit of God to clearly show you where you are returning to your own vomit. Ask the Holy Spirit to give you new cravings and to help you taste that the Lord is good (Psalm 34:8; 1 Peter 2:3). Ask Him to nourish you with the Word of God (Deuteronomy 8:3; Matthew 4:4) and enable you to drink the pure spiritual milk of the Word (1 Peter 2:2) while striving to digest the solid food that is the Word of God understood and acted upon (1 Corinthians 3:2). Only then will you have the wisdom to recognize your folly, turn your nose up at it, and walk away toward the feast the Lord has prepared for those who fear Him.

Copyright © 2021 @https://christianbooknotes.com/2021/11/15/as-a-dog-returns-to-its-vomit/ No part of this article may be reproduced or reprinted without permission in writing from Lifeword.org.