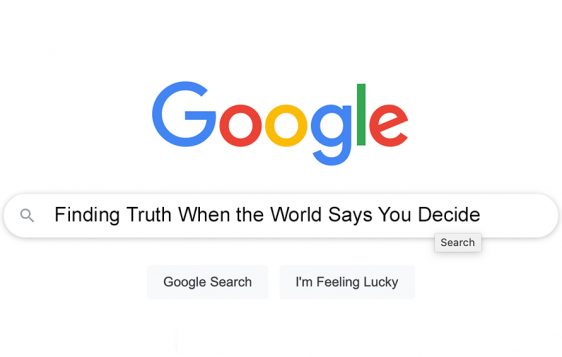 Most people, at least once in their lives, come face to face with something that may shatter their current worldview.

They come face-to-face with truth.

But in a world that is shrouded in lies and deception, truth seems more difficult to come by as, according to the modern worldview . . .

truth is a matter of perspective

religion is a thing of the past

So, let me be the one to ask you, what do you see as truth?

Are you seeking truth right now?

Now more than ever this topic is important. The world rages with thousands of stories that are twisted and spun out of control as the rich get richer, global atrocities such as poverty, starvation and genocide continue, and politics seems more like smoke and mirrors.

Let me tell you a story of a man whose worldview and life as king was forever altered as he was confronted with miraculous signs, wonders and plagues that rendered his gods and worldview useless.

He was Pharaoh at the time of the Exodus, and one day a former prince of Egypt, Moses, returned to his court and demanded he release the oppressed slaves – the Hebrew people.

Pharaoh probably laughed it off initially, and the first sign of Moses’ God-given power (a staff becoming a snake and eating his magician’s snakes) doesn’t persuade him.

Put he probably wished he had heeded the first warning . . .

He needs nine more signs to be convinced that the God of the Hebrews is real and more powerful than any of the thousands of Egyptian gods in order to let God’s people go.

Pharaoh watches as the Nile, which is the source of Egypt’s harvest, power and way of life, turns to blood and the gods Khnum and Hapi do nothing.

Pharaoh watches as frogs descend upon his court and people. In Egyptian culture, the goddess Heqt who helps mothers in childbirth, has the head of a frog and because of this, frogs are sacred and to kill one is punishable by death. So a plague of frogs would have been a nuisance and problematic, and although Pharaoh sees God’s hand in this, his heart becomes stubborn and hard.

Gnats come, and the magicians fail to copy cat God’s power. This would have been especially embarrassing for the priests of Geb, god of the earth, since they would not have been able to enter their temple with pesky insects digging beneath their skin. The Egyptians are not even able to pray to the god they thought could save them in this hour of need!

After plague number eight, Pharaoh decides to negotiate a quid-pro-quo, but the God of the Hebrews, the one true God of the universe, wants all or nothing. So God sends plague number nine – deep darkness for three days. This was an unnatural event symbolizing spiritual darkness and highly insulting to their “strongest” god – Amon Ra, sun god, which puts their whole religion and culture, their entire worldview, in doubt.

Three times it is written that God hardens Pharaoh’s heart in response to a plague. But seven times Pharaoh hardens his own heart and refuses to listen and see the truth.

The tenth plague is the deadliest yet – the plague of the firstborn, which coincides with the Jewish Passover feast of Passover as the lives of those who paint their doorways with the blood of the lamb are spared, or “passed over” by the angel of death who slaughters every firstborn that night. (Passover is a massive foreshadowing of the messianic lamb – Jesus Christ). This plague was an affront to the goddess Meskhenet and none of the Egyptian gods could protect their subjects from it.

After these ten divine judgments, Pharaoh lets the people go . . . but his heart is still hard and stubborn against Moses and the Hebrew people, so Pharaoh decides to chase them with his army – either to kill them or bring them back to slavery in shackles.

But this chase only brings them to watching the Red Sea miracle as the Israelites flee from their pursuers on dry ground. Just as they reach freedom, the sea water drowns every Egyptian who pursued them – including Pharaoh.

Pharaoh saw God’s divine hand through the infamous plagues, but it was not enough for him to accept the only truth:

The God who Moses and Aaron worshipped was and is the only God.

Just one of many examples of a God encounter that transformed lives inside and out. And here’s another one from the New Testament:

Saul of Tarsus wanted to destroy the new church established by Jesus by killing and persecuting its followers (Acts 8:3). He is even responsible for the death and stoning of the first Christian martyr – Stephen.

On Saul’s way to Damascus to root out more followers of this new religion, a light from heaven comes down and knocks him off his horse. Then a voice calls out, “Saul, Saul, why are you persecuting me?”

Knowing he is speaking to God himself, Saul replies, “Who are you, Lord?” Jesus replies, “I am Jesus, the one you are persecuting.”

Saul remains blinded by this encounter for three days until another servant of the Lord, Ananias, lays hands on him, the scales fall from his eyes and he is baptized as a follower of Jesus.

Saul becomes known as Paul the Apostle, the man who will write over half of the New Testament, travel on three missionary journeys, and be martyred by the Roman Empire for his beliefs.

Paul is an example of a man who came face-to-face with truth and allowed it to change his life.

Jesus said there are four ways people respond to truth in the Parable of the Sower:

#1 their hearts become hard and are led astray like Pharaoh

#2 their hearts lack depth and fall during trials and suffering,

#4 their hearts can be fulfilled and live a life of purpose in God’s truth like the Apostle Paul’s.

In which of these ways will you respond to truth today?

My prayer is that it changes you from the inside out and you can see and experience the purpose God has for you.

Copyright© 2020 by Melody Turner @ https://mxtv.org/face-to-face/. Used with permission. No part of this article may be reproduced or reprinted without permission in writing from Lifeword.org.