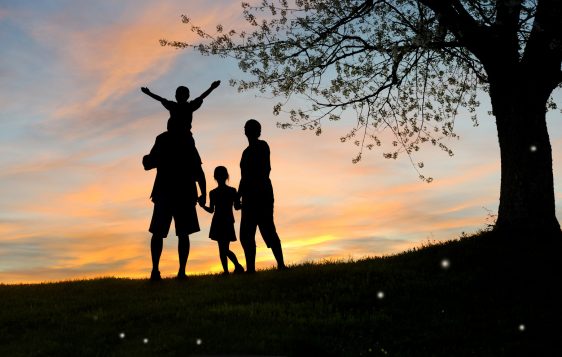 (The following is a family devotional guide with suggested questions and scriptures.)

Tell me about a time when it was hard to do the right thing. How much do your peers affect your choices? Describe some areas you feel peer pressure in.

Peer pressure is not a new thing – it goes all the way back to Biblical days. In fact, there was one man in particular who was doing the right thing under pressure, even if it meant he would face punishment…as in Lions’ Den punishment! If you are thinking “Daniel”, you would be correct! But for today, I want to focus on something that Daniel was relentless in that helped him when peer pressure came his way…and because he was relentless, God intervened in a big way! You see, Daniel was one of thousands of Jews who were taken captive and forced to live in a new land called Babylon. In this new land, the king wanted a few smart and handsome Jewish men to be trained in the customs and the language of the land and, eventually, work in the royal palace. Daniel was one of the Jews chosen. During their training, Daniel and the others were given special meat to eat, yet this meat was against Jewish customs and was considered “unclean”.

Daniel probably felt the pressure to conform (just do what he was being told to do in order to fit in). What about you – would you eat the king’s special food or refuse?

Well, Daniel was very wise in his approach. He negotiated a compromise with the chief official in which he and his Jewish friends would eat only vegetables…and if it made them look weak or sick in any way, they would conform to the king’s meats. After some time, they ended up looking better than those eating the meats!

Years later, there would be another pressure to conform…a new law had been made that no one in the land could worship any other god or man but the king himself. If anyone was to be found doing so, they would be thrown into the lions’ den. Though Daniel heard this, it did not stop him from praying to God. In fact, he would return to his home, three times a day, get on his knees by the window facing the direction of his homeland, Jerusalem, and pray to the Lord just as he had done before. Men who were jealous of David’s favor with the king saw him doing this and turned him in; the king was very sad about this, but because he had signed this new law, he had to follow it. So, Daniel was thrown into the lions’ den. The king couldn’t sleep all night, fearing what was happening to Daniel. At daybreak, he ran to the den to see what had happened. When the entrance was opened, he saw that Daniel was alive and well! Daniel had told him that God sent an angel to shut the mouths of the lions.

Daniel did something that helped him stand up against peer pressure – something that gave him the strength to live out his faith: he prayed. And not just here and there, he prayed at 3 specific times of the day. Because Daniel prayed and talked with God often, it created a relationship between them. The more he talked and prayed with God, the deeper the relationship grew. Because of their close relationship, Daniel could face peer pressure and stand firm in his beliefs…all because he chose to have a prayer life (even if it meant death to him). That is relentless! That is why 1 Thessalonians 5:17 is going to be our memory verse: Pray constantly. Relentless prayer is powerful – just as Daniel!

Here are a few ideas to keep everyone in check with this week’s TALK:

Prayer with your kiddos can follow a super easy format: Thank God, Confess sin, Pray for others, Pray for self.

Set reminders in your phones to pray! Make it a time in which you would have a few minutes to be still and talk to God.

Have your kiddos keep a prayer journal – a journal in which they basically write out their prayers. This is a highly effective way for deepening their prayers, as well as keeping track of answered prayers. There’s something special about writing out what your heart is feeling that tends to connect us more to God and be sensitive to His voice.

To get in the habit of praying, teach your kiddos to pray before their meals. You can start out with something simple like this: “God is great, God is good, let us thank Him for this food!” As they grow older, challenge them to go beyond this simple prayer and pray on his/her own in front of the family: a different kiddo would take a turn each night. If they are hesitant about doing it, model it for them for a week until they get the hang of it!