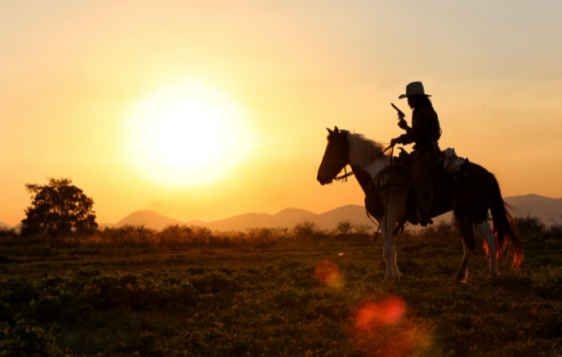 Watching an old western movie, we’d often hear the sound of thundering horses and blaring bugles and we knew the cavalry was on its way to rescue the “damsel in distress.” Today it might be the sound of a siren or an ambulance letting us know help is on the way for us or someone we love. But the sound of rescue I love most are my two favorite words in the Bible — But God!

Over and over in Scripture, we read about God’s people being in terrible situations. Then we see those two little words  — But God — and we are assured God is still in control and that He works everything out. However, rescue is not always immediate because God uses the good and bad to teach us dependence on Him.

Those who believe in Christ and have trusted Him as Savior still face difficult times, and the answer to our But God dilemma is found in Romans 8:28: “We know that all things work together for the good of those who love God: those who are called according to His purpose.”

At the age of twelve (almost 63 years ago!), I heard the gospel story (the death, burial and resurrection of Jesus Christ), realized I was a sinner, confessed my sins to God and asked Him to forgive me. Then I asked Jesus to come into my heart and take control . . . and He did!

One of the first verses I memorized was Romans 8:28. And through the years, I’ve found that God has always been faithful . . . but He hasn’t always appeared on a thundering white horse with trumpets blaring to save me from a terrible situation.

Sometimes the trouble was due to my sin and sometimes the sins of others. Often, it was a time of necessary teaching. Honestly, there were times I wept bitter tears and asked, “Lord, don’t you love me? Why are you letting this happen to me?” After all these years, I know the answer — yes, He loves me with “an everlasting love” (Jeremiah 31:3), but He constantly teaches me how to be like Him. Sometimes those lessons are painful and take a while.

In his book Trusting God, Jerry Bridges said, “God knows exactly what adversity we need to go through to grow more and more into the likeness of His Son . . . He not only knows what we need but when we need it and how to bring it to pass in our lives . . . He is the perfect teacher, and His discipline is always exactly suited to our needs.”

I once told my boss, “I think God is trying to teach me something”, to which He immediately replied, “God isn’t trying to do anything!” I got the point — God was teaching me, and the question was whether I was listening and learning.

As I look back through the years, I see the times of teaching. Some lessons I learned quickly and some took many years. Here are three of many But God moments in my life — when God did indeed come to my rescue:

• My mother probably had a mental illness. As a child, I wondered why I was so wonderful one minute and so awful the next. Of course, I blamed it on my behavior, and I’m sure that was often true. But after praying and studying, I’ve realized she probably suffered from untreated bipolar disorder that caused extreme “highs and lows” and contributed to the mental and verbal abuse and neglect my sisters and I suffered.

But God used mother’s condition to make me strong and taught me many lessons, especially what not to do as a mother. After her death in 2002, my husband noticed silent tears one day and asked what was wrong. I said, “I just realized I’ll never have the mother I always wanted.” He simply said, “No, but our children do.”

That’s when I realized her mental illness was used for my good, helped me to depend on Him, and taught me a few dos and don’ts of motherhood. God hadn’t removed the problem; he saw me through it by His grace and made me more like Jesus.

• We lost our firstborn son. I had always wanted to be a mother, and Pat and I named our first child before we married: Sean Patrick. We were absolutely thrilled when we found out I we would be having a baby— the first grandchild on both sides. The pregnancy and birth were uneventful, but after only seven hours of life and before I even got to hold him, Sean coughed up phlegm and passed away in the hospital nursery. We were devastated.

But God has used Sean’s short life in many ways through the years. We determined that not even one second of our son’s life would be used by Satan and that we would praise the Lord and glorify Him in all of it. God honored that decision and used our testimony to bless others. People can’t understand the loss of a child unless they have been through it, and God has put people in my path I could empathize with and encourage, including my sister, who lost her fourteen-year-old son in a car accident.

Another But God — Two years after Sean died, we welcomed our precious son, Robert Patrick, then our princess, Trina Michelle, completed our little family. When they were married, their spouses became our “children in love,” and a few years later we added three grandchildren and a great grandson! God is so good!

• I always wanted to be a schoolteacher, but God didn’t allow it. I was a good student and planned to attend college, but a week before high school  graduation a handsome young Marine asked me to marry him, and college went by the wayside. I fell back on what I’d learned in my secretarial classes, and for ten years, I worked at the Arkansas Department of Health — Maternal and Child Health Division.

• But God did allow me to teach for many years at our church, and some of my fondest memories and blessings revolve around those experiences and those beloved students.

• Another But God — After I left the Health Department in 1980, I was asked by the editor of the Baptist Trumpet, the weekly newspaper of the BMA of Arkansas, to fill in temporarily for their typesetter who was on maternity leave. Almost 41 years later I retired, having served as editor the last sixteen years . . . God works in mysterious ways!

There are many other But God moments, big and small, and times when I folded my arms, looked up to heaven and asked, “Well, how will you work this one out?” But God has always been there, working all things together for my good.

Keep looking for those But God moments — they’re coming!