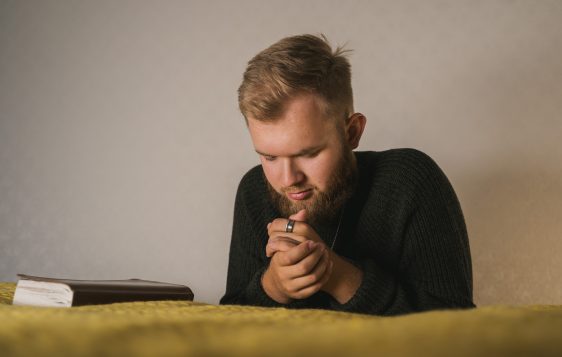 You’re traveling to a new home, far from the one you had before.

Your family is in the van with you, and everything you own is in the U-HAUL truck behind you. You’re heading to your childhood home, the place where you grew up, but there’s bad blood there. You left on bad terms after deceiving your closest family members.

You’ve been gone for nearly 20 years leaving plenty of time for anger to fester in their hearts. For the entire trip, you have done nothing but wonder what will happen when you arrive.

As you near, you decide to stop to rest.

You want to feel out the situation, so you send a message stating you are coming and you’re bringing your whole family and everything you own.

You get a message back that says your brother, you know, the one you deceived and stole everything from, is coming to meet you and he’s bringing 400 of his closest friends. I know, I know, how can someone have 400 close friends?? Facebook.

You are in a panic.

After everything you did to him, how you betrayed him, tricked him, stole everything he had and would have, he probably hates you still. You think he probably wants to kill you and everyone with you.

1.     Do you gather up all those who are with you and train them to use a weapon? Make it a fight to the death?

3.     Do you send another message begging for your brother and his men to stand down?

In the midst of his panic and when he knew his brother was coming with 400 men to meet him, he stopped and…

“Then Jacob said, ‘God of my father Abraham and God of my father Isaac, the Lord who said to me, ‘Go back to your land and to your family, and I will cause you to prosper,’ I am unworthy of all the kindness and faithfulness you have shown your servant. Indeed, I crossed over the Jordan with my staff, and now I have become two camps. Please rescue me from my brother Esau, for I am afraid of him; otherwise, he may come and attack me, the mothers, and their children.  You have said, ‘I will cause you to prosper, and I will make your offspring like the sand of the sea, too numerous to be counted.’” (Genesis 32:9-12)

In his prayer, Jacob did 4 things.

1.     He acknowledged who God was and His power and authority. He called God the God of his father and his grandfather because he knew of the mighty things God had done for them.

2.     He reminded God he was obeying His command. God doesn’t need reminding, but Jacob was acknowledging he was doing what God had asked. He submitted his own will for the will of God.

3.     He humbled himself and admitted his sin. He knew God had been with him in many ways, even acknowledging the fact they crossed the Jordan River. But he knew he was a sinner. He knew what he had done before was wrong and he admits to God he is not worthy of all God has done in his life.

4.     He begged God for help. He remembered how great of a hunter Esau was. He was a burly, strong and mighty man. And now, he was coming. But Jacob knew God could protect him. So, he begged for the Lord to deliver him from a brother seeking revenge.

Why is it that when faced with harsh circumstances and trials in life, we first try to fix the problems ourselves? In fact, I hear so many times, “I’m at the end of my rope. I’ve tried everything. All that’s left to do is pray.”

Prayer should be our first reaction and not our last resort.

Today, if you are fighting in a battle, stop and pray. Use Jacob’s prayer as an example.

Recognize God for who He is.

Remember the mighty things He has done for the ones He loves.

Humble yourself under His mighty hand. And reach out to Him for His protection and guidance.