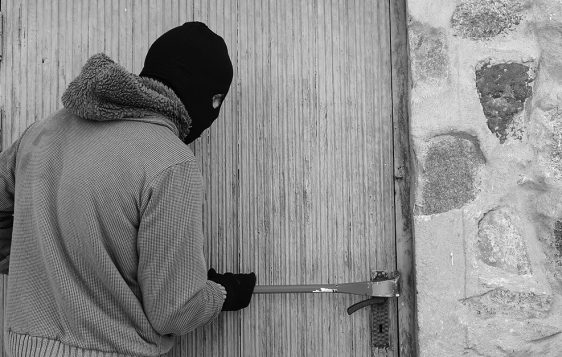 In 1972 the rapture movie A Thief in the Night was released, but I didn’t see it in a theater. I saw it in my church’s fellowship hall when I was very young. To this day I can clearly remember the scenes of chaos on earth after millions of people disappeared: planes crashing, cars wrecking, people waking up to find their entire families gone, then later in the movie people being executed because they refused to take the mark of the beast.

I had been saved at seven and walked the aisle to be baptized a couple of weeks after my friend Staci did. She had called me on the phone on a Sunday night and excitedly told me she was saved.

My salvation really started with that phone call. I wanted to have that same kind of excitement.

Six years later those horrific scenes from the movie began to haunt me. I remember waking up in the middle of the night panicked that the rapture had happened and thinking that if my parents had been Christians I could have just checked to see if they were still in their beds.

Instead, I would turn on my radio and listen for a while to see if the news was reporting any planes falling out of the sky or massive car wrecks occurring all over the world.

Thirteen is the prime age to begin having doubts about salvation, but the bigger problem was that I had no one to talk to about them. It was such a scary thought to me that I could be left behind, and I was jealous that my friend Caroline, whose parents were Christians, could just go check on her parents if she had doubts.

I can’t remember when or why the doubt went away, but eventually I made it through those doubts, mostly because of the divine grace of Jesus Christ: He just kept drawing me to himself, even when I walked far away from him.

Decades away from those pre-teen years of worry, doubt, and anxiety about my Christianity, I can see what God was doing with my life, how he was with me and providing for me. Here are some of the ways he kept me in the palm of his hand and on the right track growing up:

#1 – He gave me the desire to hang around Christians. I simply did not prefer the company of the fast crowd, the people who partied and seemed so cool, the popular ones.

#2 – He gave me a church. It’s the only one I ever attended, and God placed that church almost in the backyard of where I grew up. The people in it loved me and discipled me many years before the term “discipleship” existed, as far as I knew.

#3 – He gave me a praying Grandmother. I spent every Sunday after church with her and the rest of my family. She was a huge influence on my life. When I got older she told me that she was praying for me and asking God to give me a Christian spouse.

#4 – He gave me a Christian spouse. I was never really interested in a guy who wasn’t a Christian. When I met my husband in college, he and his brother were consistently attending my church, and I noticed him immediately. Tall, good-looking AND in church, he was the total package.

#5 – He gave me Christian friends. It wasn’t that my friends and I were really following the Lord like we should have in college, but somehow we didn’t turn away from our faith and get into things we shouldn’t like so many of our peers were doing.

Thankfully, when my own children were pre-teens, they talked to us about any doubts they had about salvation. I shared with them the insecurities and anxiety I had at their age and encouraged them to talk to a youth pastor or someone else.

Just like me, they were able to eventually work through their doubts and have peace.  Now I am humbled at how he saw me through that scary period of doubt, gave me a desire for the Christian life, and drew me to himself.

Satan is certainly happy when people doubt their salvation. It keeps the gospel from being spread and stumps your spiritual growth. Don’t let him win the tug of war for your heart.

Having doubts about your salvation can indicate that you understand fully how sinful you are and how much you fall short of giving God the glory he deserves. Don’t be scared of the doubts. They will come in some form the rest of your life.

When they do, talk to God. He is there even if you’ve moved away.