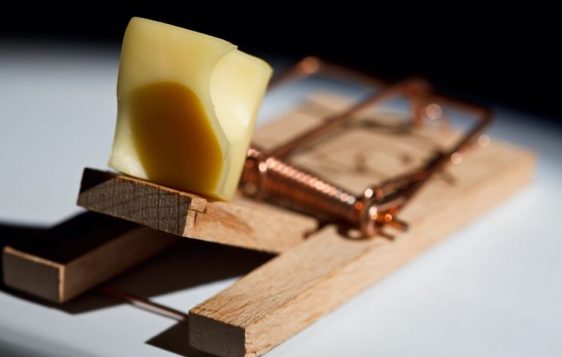 Little shreds of silver foil fell to the floorboard of my car as I opened my glovebox looking for an important paper. Why was there trash in there? I found it odd, but kept looking. However, instead of the important document I was searching for, I found more of this little silver foil and even some yellow plastic. Deeper into the glovebox, I stopped immediately when I noticed two tiny black specks beside the shredded paper.

What in the world?

At that moment, it hit me! I had Hershey kisses and banana Laffy taffy in a little bag inside the glovebox. You know, in case I needed a little snack while on the road. Apparently, the mouse thought the same thing.

I washed my hands, grabbed some gloves, the vacuum and some Clorox wipes and set to work. After sharing the shocking news with my husband, he gave me a mousetrap to set in my car in case the little feller returned for more sweet treats.

I smeared a little peanut butter on the end and placed a nice size raisin on top. I pulled back the metal bar, and then took the other little metal piece and carefully set it under the hook. I slowly moved my hand away, terrified I would snap it. As my hand was almost out of the danger zone, I barely clipped the end and then SNAP!

I was caught in my own trap!

A common occurrence for the Pharisees as they spoke to Jesus.

“And when he was come into the temple, the chief priests and the elders of the people came unto him as he was teaching, and said, By what authority doest thou these things? and who gave thee this authority? And Jesus answered and said unto them, I also will ask you one thing, which if ye tell me, I in like wise will tell you by what authority I do these things. The baptism of John, whence was it? from heaven, or of men? And they reasoned with themselves, saying, If we shall say, From heaven; he will say unto us, Why did ye not then believe him? But if we shall say, Of men; we fear the people; for all hold John as a prophet. And they answered Jesus, and said, We cannot tell. And he said unto them, Neither tell I you by what authority I do these things.” (Matthew 21:23-27)

The Pharisees waited and listened. As they strolled with the crowd following Jesus, they often would plot about how they would trap Him into declaring something that would allow them the upper hand. This is exactly why they were asking about the authority of Jesus. If Jesus had said that it was of God, they would have yelled, “BLASPHEME!”. But if He had said it was on His own authority that He did these things, He would be declaring He was just a man and then the people would look to the Pharisees as having more authority than Him.

So, Jesus caught them in their own trap. As He said the words in verses 24-25, it was like that metal bar was flying back and about to SNAP on the Pharisees.

They talked amongst themselves, realizing that they couldn’t answer and still keep their position. And there was only one response they could quietly muster… “We cannot tell.”

But Jesus didn’t just leave it there. He used a parable to help them see more clearly their wrong attitude and choice.

“But what think ye? A certain man had two sons; and he came to the first, and said, Son, go work to day in my vineyard. He answered and said, I will not: but afterward he repented, and went. And he came to the second, and said likewise. And he answered and said, I go, sir: and went not. Whether of them twain did the will of his father? They say unto him, The first. Jesus saith unto them, Verily I say unto you, That the publicans and the harlots go into the kingdom of God before you. For John came unto you in the way of righteousness, and ye believed him not: but the publicans and the harlots believed him: and ye, when ye had seen it, repented not afterward, that ye might believe him.” (Matthew 21:28-32)

As the Pharisees listened to the story, they felt righteous in knowing the right answer, yet they couldn’t see that they were the main subject of the story. They were the ones who were wrong and would not repent even though they knew the truth!

No matter how many religious or good things they did, how much money they had or gave, or what standing they had in the temple, they would never see heaven without admitting that Jesus was the Son of God and that He was the Messiah. They would not taste of the beauty of an eternal home with God because they could not let go of their pride, admit they were wrong and believe in Jesus.

What are you trusting in today? Is it Jesus? Or are you like the Pharisees hoping that your good deeds or your money will get you into heaven? Or maybe you think that just by chance, at the last minute before you die, you’ll have the power, the mindset and ability to accept Jesus then…

Don’t think you can get one over on the Lord… you’ll get caught in your own trap. Do what needs to be done today.

Repent. And turn to Jesus!